You are here: Home / Archives for Sen. Marco Rubio 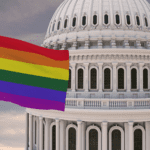 By L.A. Williams Christian Action League December 1, 2022 The U.S. Senate on Tuesday voted 61-36 to pass the so-called Respect for Marriage Act, an attempt to codify same-sex marriage into federal law and, in the process, trample religious liberty for those who believe that marriage is between a man and a woman. The bill, […]