You are here: Home / Archives for Bill Bright 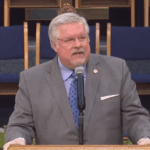 By Dr. Mark Creech Christian Action League August 1, 2022 Some people are unaware that before becoming executive director of the Christian Action League and a lobbyist in the North Carolina General Assembly, I had been a pastor for twenty years. In the late nineties, I became increasingly burdened by the moral meltdown across America. […]