You are here: Home / Archives for Anthony Keith Welch 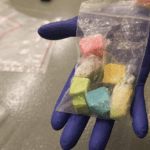 By Peyton Majors Christian Action League September 16, 2022 State and federal law enforcement officials are warning the public about a colorful but deadly street version of the drug fentanyl that appears to be candy or sidewalk chalk and has been found in 18 states, including North Carolina. Dubbed “rainbow fentanyl” due to its appearance, […]