CAL Executive Director Calls Graduates ‘world changers’ and urges them to make ‘a world that is not yet, but ought to be’
By L.A. Williams
Christian Action League
June 1, 2017 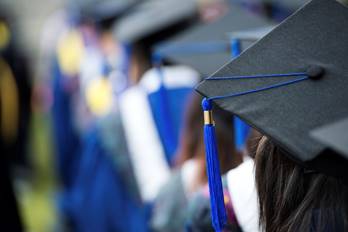 GREENSBORO – Graduates from Vandalia Christian High School in Greensboro received words of encouragement and of warning during their May 26 commencement as the Rev. Mark Creech, executive director of the Christian Action League, urged them to envision “a world that is not yet, but ought to be.”

Using the phrase from a prayer written by Dr. Earl Adams, Dr. Creech contrasted the tensions and conflicts of today’s world with the one to come.

“If the kingdoms of this world are really to become the kingdom of our Lord, then it is the duty of everyone who names Christ as Lord to see that he really does become the Lord of all of life,” he told the 32 seniors amid a crowd of about 800 gathered in the school’s gymnasium.

“Years ago, the famous psychiatrist, Dr. Karl Menninger, was giving a lecture on mental health and was answering questions from the audience,” Dr. Creech told the crowd. “Someone said, ‘Dr. Menninger, what would you advise a person to do if that person felt a nervous breakdown coming on?’ Most people thought he would say, ‘Go see a psychiatrist immediately,’ but interestingly he didn’t. To everyone’s astonishment, Dr. Menninger replied, ‘Lock up your house, go across the railroad tracks, find somebody in need, and help that person.’”

“You see,” Creech said, “when you’re sharing, serving, empowering others, that same remarkable energy finds its way back to you.”

The speaker told graduates, whom he called “world-changers” that no matter whether their abilities and capacities were little or large, it is only as they surrender them to God that they take on significance.

“After hearing Dr. Creech speak on the Old NC Capital Steps many months ago, Donnie Oates, pastor of Vandalia Baptist Church, and I knew that he would be a tremendous commencement speaker for our school,” Weatherford said. “Dr. Creech’s words of encouragement and warning were presented with a solid Biblical worldview. It was obvious the senior class and those in attendance were fully engaged, as there were several echoes of ‘Amens’ from the audience.”

Dr. Creech said he was honored to address the graduates and their families and had prayed that his words would count for eternity.