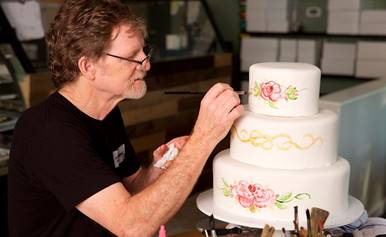 Dr. Mark Creech, executive director of the Christian Action League (CAL), is issuing a call to the hundreds of churches who support CAL financially, as well as the thousands within its network, to specially pause on Sunday and pray for a Supreme Court case scheduled to be heard Tuesday, December 5th.

“This case is, unquestionably, one with huge ramifications for religious liberty,” said Dr. Creech.

Dr. Creech is referring to the Colorado Christian cake artist Jack Phillips and the Masterpiece Cakeshop, which has been Phillips’ business for 25 years. The name for Phillips’ cake shop is based on Scripture: For we are God’s masterpiece. He has created us anew in Christ Jesus, so we can do the good things he has planned for us long ago (Eph. 2:10).

Phillips rightly contends that a follower of Jesus Christ is supposed to incorporate his faith into everything he does. This is why when a gay patron asked Phillips to make a wedding cake for a same-sex couple, he politely declined.  Immediately, the two men who made the request angrily left the store, and soon thereafter Phillips started receiving threatening phone calls.

Next, Phillips received a letter from the Colorado Civil Rights Commission stating that he was being charged with sexual orientation discrimination.

Phillips made it clear to authorities that he doesn’t refuse service to anyone; he even offered to help the gay couple who requested a wedding cake to find another baker to assist them. But Phillips insists that he cannot and will not design cakes celebrating an event contrary to his religious beliefs. Yet Phillips has been ordered by the government to start celebrating gay nuptials, undergo a re-education program, and file quarterly compliance reports.

He’s appealed his case to the Colorado Supreme Court, but they have refused to hear it. Now his journey through the court system leads him to the Highest Court in the land, the U.S. Supreme Court, and the decision will undoubtedly be a landmark one.

“The government should not force anyone to create art that conflicts with their conscience. Yet that is exactly what the government did to Jack. And if the government has the power to tell you what to believe on the subject of marriage, it has that same power over all issues. That’s un-American. And terrifying.”

Lea Carawan, executive director for the Congressional Prayer Caucus Foundation, wrote in a recent alert about the case:

“Though others might state otherwise, this case is not about overt discrimination, it’s not about gender identity or choices, and it’s not about one person telling another person about how to live his or her life. This case will determine whether or not the government can force someone to violate his or her conscience and to do so in an intrusive and egregious manner. Should a Jewish baker whose mother was a Holocaust survivor be forced to decorate a cake with swastikas for a neo-Nazi activist? Should an African-American baker be forced to decorate a cake with offensive symbols for a Ku Klux Klan member? Of course not! Every American, regardless of where they are on the political spectrum, should be concerned about an unfavorable outcome.

“The Supreme Court case next week will affect all of us…We have seen this play out in various ways on the national scene again and again…with designers, retailers, florists, bakers, and more.”

ADF has also been handling another case much like the Jack Phillips’ case. Baronelle Stutzman, a floral artist and grandmother, turned down a request by a gay man to provide flowers for a same-sex ceremony. Like Phillips, Stutzman said no matter how deeply fond she was of the man who made the request of her business, “[M]y relationship with Jesus is everything to me. Without Christ, I can do nothing.” Consequentially, Stutzman was sued both professionally and personally by the Washington State Attorney General and the American Civil Liberties Union.

The Washington State Supreme Court ruled against her.

She’s closely monitoring the Phillips case while waiting to hear whether the Supreme Court will take-up her own.

“Stutzman and Phillips have been willing to put their livelihoods on the line, trusting God fully in the matter,” said Dr. Creech. “If Phillips wins his case, religious liberty wins. If the case is lost, we all lose, and it remains to be seen in what other matters Christians will surely lose the right to freely exercise their faith in their businesses or anywhere else. All our rights in some way hinge upon the First Amendment, if our First Amendment rights are undermined, all the others will be negatively impacted over time. This calls for earnest prayer by God’s people! Let us put away all known sin and earnestly seek His face.”