You are here: Home / Rev. Creech's Commentary / The Lord’s Day and Liberty

The following is from a sermon I wrote and delivered in 2015 titled, The Lord’s Day and Liberty. In light of some of the Sunday-related legislation taken up in the North Carolina General Assembly this year and the coming July 4th celebrations, I thought it might be appropriate to share a few quotes from that message.

Remember the Sabbath day by keeping it holy. Six days you shall labor and do all your work, but the seventh day is a Sabbath to the Lord your God. On it you shall not do any work, neither you, nor your son or daughter, nor your male or female servant, nor your animals, nor any foreigner residing in your towns. For in six days the Lord made the heavens and the earth, the sea, and all that is in them, but he rested on the seventh day. Therefore the Lord blessed the Sabbath day and made it holy. (Exodus 20:8-11)

Certainly one of the most meaningful and unquestionably providential events to occur in American history took place when our forefathers landed at Plymouth Rock. They had fled their native country for refuge in the Western wilderness of the North American continent because of their love for liberty and their love for Lord’s Day, often referred to as the Christian Sabbath. King James had decreed reforms concerning Sunday observance that they believed were a dangerous step backward into immorality.

The early Pilgrims, therefore, braved untold hardships of sixty-three stormy days on the rough seas of the Atlantic so that they might observe the Lord’s Day as they were convinced God had commanded. They were determined, with God’s help, to build a new nation upon the foundation and superstructure of liberty and the Christian Sabbath.

They were thrilled as they approached land on a Saturday. But suddenly a storm arose that drove them to the shore of Clark Island where they would take shelter for the night.

The next day was Sunday. And, instead of preparing the ship to sail to Plymouth Rock, as we might expect, they remained where they were and paused to worship God and give thanks. On Monday, December 11, 1620, the Pilgrims set sail and landed at Plymouth Rock.

In that historic event, I believe they left us a glowing example. They showed us that a love and respect for the Sabbath Day and a love for liberty go together.

George Washington during the Revolutionary War, Abraham Lincoln in the Civil War, Woodrow Wilson during the First World War – all gave orders to relieve troops as far as possible from fatigue duty on Sunday, giving them the opportunity to attend public worship services. Presidents Hayes and Garfield would walk to church so their staff and servants might rest and worship on the Lord’s Day. President Grant, once in Paris, refused to attend horse races on Sunday. President McKinley at the opening of the Sate Centennial of Tennessee refused a trip to Lookout Mountain, saying politely, “No, I don’t go sightseeing on Sunday.” President’s Theodore Roosevelt and Coolidge spoke in appreciation of the Lord’s Day; Coolidge said, “I profoundly believe in the Lord’s Day.” It’s said that President Truman while on a fishing excursion on the Columbia River, refused to cast a line on Sunday.

Some have argued against Sunday observance, “Well, this is not the seventh day of the week. The Fourth Commandment is, ‘Remember the Sabbath Day to keep it holy. For in six days the Lord made heaven and earth…and rested the seventh’ (Ex. 20:8, 11). You can’t argue for observance of the first day of the week as if it were the seventh, Reverend,” they say to me.

But my friends, this change from the seventh day to the first day of the week is one of the most remarkable events in human history. How is that the people who had for hundreds of years strictly and zealously observed the seventh day as the Sabbath change to the first? We see this practice in the New Testament, in the custom of the apostles, in the tradition of the early Church when it was predominately led by Jewish leaders. You can study it carefully and there is essentially only one reason you can account for it – it is evidence for the resurrection of Jesus Christ. They were celebrating on the first day of the week because Jesus Christ completed the work of our redemption on that day. On that day he secured the hope that is our eternal rest.

In the beginning when God rested on the seventh day, he didn’t need to rest, but he gave us an example. When the perfect Son of God went to the synagogue, as was his custom, he was setting an example. We too need to exemplify the benefits of this day.

Indeed, man wasn’t made for the Sabbath, but the Lord’s Day was made for us to set aside to change our focus from the temporal to the eternal – to purposely dedicate ourselves to the highest, holiest, noblest aims of life, while also finding comfort, peace, and strength in times of personal and corporate trials.

If we don’t set aside a special time for this, it’s human nature to neglect these finer aspirations. They can be choked out by the weeds – the many diversions and disruptions of life.

That’s what Sunday should be about, not some new opportunity to play, not a chance to make another buck, not a holiday but a holy day – a time to specially remember and acknowledge the One from whom every good and perfect gift in life comes.

Sunday is a day specially set aside for rest…a day for worship…a day for family…a day for good deeds.

The Dutch used to call the day God’s Dyke – a bulwark against the insidious inroads of secularism, materialism, and even paganism. And although we understand that there are already dozens of other activities now legally occurring on the Lord’s Day. It should be of concern to us that our nation is drifting rapidly into a state where any value to be derived from this special day is largely lost to the culture.

We don’t purposely set out to destroy it; we simply allow it to go by default. And if our churches are to once again be strong, and liberty is to once again find a sure foundation in America, we are going to have to find ways, even in a troubled, complex, and multi-cultural society, to renew and celebrate the benefits of the Lord’s Day.

I remind you the early Christians did it. They did it in a pagan world where slavery existed, where they didn’t have the same freedoms we have, in a time when the circumstances, one might argue, were even more complicated than our own. Yet they still found a way to consecrate this special day.

During the 1980s, President Ronald Reagan asked Americans to join in a tremendous national effort to rescue, restore, and rededicate the Statue of Liberty to the traditional values she represented. Lady Liberty with her torch aloft and standing in New York Harbor was in considerable disrepair. The President encouraged people to give $230 million to mend her faults.

The church has some repair work to do on liberty – we must do some repair work on the traditional values that make liberty possible. And I suggest to you that Liberty and the Lord’s Day go together. They are Siamese twins. If we lose one, we will lose the other. As we guard one, we must guard the other.

James P. Wesbery once stated the principle in this fashion:

“We love our country, its flag – the old red, white, and blue. We love its people, its freedom, the Declaration of Independence, our immortal Constitution, and the Bill of Rights. Our liberty has been bought with a great price – the price of blood. But to be preserved we must have the highest type of patriotism. To preserve our liberty and these valuable documents we must be a God-loving, God-fearing, God-honoring people. To secure constitutional government we need that pause with our week’s occupation in the quiet peaceful hours of the Lord’s Day. One day’s rest and worship in seven makes us better citizens. It is the Sunday cultivated character we need to give us a citizen body and an electorate fit to guard and preserve our liberty.”

Of course, we believe with every fiber of our being that every day belongs to God and that every day should be lived for Him. But we cannot read the Fourth Commandment, which in God’s economy has never been repealed, without also seeing that the Sabbath Day – the Lord’s Day is uniquely His day and must be sanctified among us. 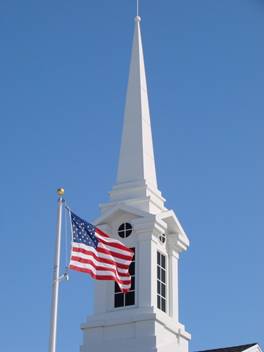 Jeremiah chapter 17 is an amazing passage of Scripture. Throughout the reading of Jeremiah, there is this continuous denunciation of Israel’s sins. The prophet chides them for the way that they had fallen far from God with their lying, their corruption in government, their adulteries, their murders and violence, their idolatries – just about any sin you can think of Jeremiah named it. But in the 17th chapter, he promises them that if they would keep the Sabbath day the Lord would restore the throne of Israel and their nation would be preserved.

Certainly, the prophet wasn’t saying that if they would just keep the Sabbath they could go on sinning with impunity. God forbid. That’s not what he meant. But what Jeremiah was saying was this: You have committed all of these crimes against heaven because you have neglected the one day one when character is built, the day on which communion with God is especially established. When you recommit yourself to observing the Sabbath right, these sins will surely lose their power over you.

He was telling them, if you want to be free again – the Sabbath is at the heart of that hope.

In 1863 Mark Hopkins, the physician who became a tremendous minister, philosopher, and the famous president of Williams College, said:

“History shows that God has joined freedom with the Sabbath, with English and American liberty. The Sabbath Day was the turning point. Freedom has always found the best name and the truest defenders in those parts of the country where the Sabbath has been most honored.”