You are here: Home / Christian Action League / The Latest on Pastor Brunson: Released from Prison and Moved to House Arrest 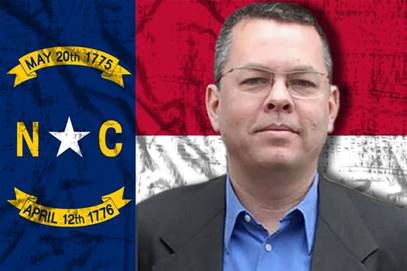 Prayers continue for an American pastor jailed by Turkish authorities for nearly two years and moved to house arrest on Thursday.

Andrew Brunson, 50, originally of Black Mountain, North Carolina, has lived in Turkey for more than 20 years and was serving as pastor of Resurrection Church in Izmir when he was arrested in the fall of 2016 and accused of helping those behind a failed coup attempt. If convicted of the trumped up charges of espionage and terrorism, he could face up to 35 years in prison.

“We rejoice with Brunson and his family that he is out of the prison, but want to urge Christians to keep praying. This nightmare is not over for this stalwart servant of God,” said the Rev. Mark Creech, executive director of the Christian Action League. “Pray for him and for others being persecuted for their faith all over the world.”

Brunson’s family told the media the father of three appears to be gaining back some of the weight he lost while jailed. They said he will not be allowed to leave his home except to attend hearings and that he is being used as a pawn in a political game between Turkey and the United States.

Stakes in that game increased sharply this week.

U.S. authorities ramped up pressure on Turkish President Recep Tayyip Erdogan to release Brunson, especially after President Trump met with him at a NATO summit earlier in the month.

North Carolina’s U.S. Senator Thom Tillis (R) had attended one of Brunson’s hearings and was hopeful the minister would be released at his next court appearance, which was July 18. To push for that outcome, Tillis helped secure a provision in the 2019 National Defense Authorization Act that would prohibit Turkey from receiving any F-35 aircraft from the United States while it continues to mistreat U.S. citizens and Turkish residents.

But on July 18, the Second High Penal Court ruled it would continue Brunson’s case and hear more testimony on Oct. 12. Trump called the ruling a “total disgrace.”

Thursday’s announcement that Brunson was being moved to house arrest was labeled a “step in the right direction” by U.S. lawmakers. Senators Tillis, Jeanne Shaheen (D-NH), and James Lankford (R-OK) issued a joint statement saying the move “will help alleviate some of the unacceptable hardship and anguish Pastor Brunson and his family have endured over the last 20 months,” but also calling for his release and return to the U.S., an action that the lawmakers say would “begin to restore the longstanding friendship between our two nations.”

At one time Erdogan had implied that Brunson would not be released unless the U.S. extradited Turkish cleric Fethullah Gulen of Pennsylvania. The Turkish government claims Gulen was the architect of the attempted coup, a charge he denies. Since the coup, Erdogan has had nearly 160,000 people detained.

When Brunson was not released as anticipated, President Trump and Vice President Pence took their anger public, threatening sanctions, which drew outrage from Turkey’s foreign minister. Political analysts have called the feud the worst political crisis between Ankara and Washington in 40 years.

Friday, My Faith Votes, CEO, Jason Yates sent an email to its friends and supporters urging them “to boycott travel to Turkey and Turkish Airlines until Andrew Brunson is freed.

“Now is the time to stand in solidarity with this American citizen who has been unjustly treated by the Turkish Government,” said Yates. The organization, with a national reach, seeks to motivate Christians to act on their faith by casting an informed vote based on a biblical worldview during election seasons. Former Presidential candidate, Ben Carson, is its honorary chairman.

“If Brunson isn’t released before November, when they are scheduled to reconvene, then I believe they ought to do it then, if not before,” said Rev. Creech.