You are here: Home / Rev. Creech's Commentary / The Christmas Bug and the Need to Get Real

During Christmas time, my father loved making this season of the year magical for children.

As children, every year Daddy would remind my sister and me to put cookies and milk out for Santa’s arrival on Christmas Eve night. On Christmas morning, I was always giddy with excitement to find an empty plate and glass under the tree next to my toys.

One Christmas morning, I was nearly beside myself to follow Santa’s tracks where he had stepped in the ashes of our wood burning fireplace after coming down the chimney and walking across the living room floor to place my gifts. I got every kid in the neighborhood to come and see it. Every one of them was in awe as they ogled over St. Nick’s very own footprints. Of course, I wasn’t old enough to recognize that those tracks were remarkably similar; in fact, even identical to my Daddy’s fireman’s boots he kept in the closet at the end of the hall.

The night Santa would come; I would desperately try to sleep, lest he should find me awake when he showed up. One Christmas eve, when sleep fled from me, I heard sleigh bells outside my bedroom window. I could hardly believe my ears as I threw the covers over my head and buried my face in the pillow. I thought, “It’s Santa!!! It’s really Santa and his reindeer and sleigh!!!” It never dawned on me the new strap of sleigh bells Daddy had hung near my stocking was intended for more than a Christmas decoration.

Out of all of these, however, nothing was as enchanting as Christmas critters. As Christmas neared, if there was an animal or perhaps even an insect of some kind nearby, Daddy would say, “Hey, hey, look over there. Do you see that squirrel on the side of that tree?” “Yes sir,” I would respond. “Do you know what that is? That’s a Christmas squirrel, and he’s spying on you to see if you are being naughty or nice, and he’s going to report back to Santa Claus. That’s how he gets a lot of his information on little children,” he would tell me.

These are such precious memories. As you might imagine, as a father, I wanted to pass this tradition along to my own children.

One year, about three weeks from Christmas, when they were still small, we took our children to visit their grandparents. That day I noticed on the big picture window of their house an unusual looking and rather large beetle. I called my son over and said to him, “Hey, hey, look what’s on the picture window. Do you see that huge beetle?” I asked. “Yes sir,” my boy said. “Do you know what that is? That’s a Christmas Bug and he’s spying on you to see if you are being naughty or nice, and he’s going to report back to Santa Claus. That’s how he gets a lot of his information on little children,” I told him. He then rushed off to play outside.

Not long thereafter, I suddenly heard a loud noise near the front of the house. BLAM!!!  I rushed to see what was happening, only to find the Christmas Bug was splattered across the picture window just like an insect on a car’s windshield. I stuck my head out the front door and called, “Son, what happened to the Christmas Bug?” He replied, “Daddy, that Christmas Bug ain’t telling Santa Claus nothing!”

Our family finds that story hilarious, but I’m sure you’ll be relieved to know I didn’t end up raising a criminal. My son turned out to be a very fine man.

But this does give me the opportunity to say, Christmas is actually about something very real. It’s not about Santa, reindeer, sleigh bells, or Christmas critters, as much fun as playing that game with children might be. It’s about Jesus Christ, the One who came to make us real. 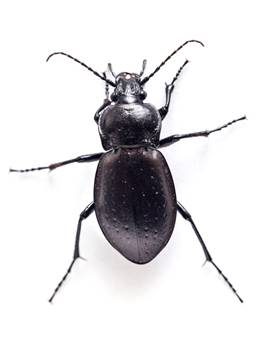 Christmas is about getting real with God. The first step, of which, is recognizing that we’re sinners, fallen, broken, rebels against God and his ways, quite adept at being double-minded, double-tongued, and double-trouble. Christ, the Son of God, the Messiah, the Savior of the world, came to transform and renew our lives with his saving power. We cannot overcome our depravity or experience redemption apart from him. He was born to identify with us that he might save to the uttermost anyone who trusts and follows his word.

It’s about getting real with ourselves and others. Unless we live authentically, we lose our souls. We mustn’t pretend and cover up, deceiving ourselves, and leading others to believe that we’re something we’re not. That’s what Adam and Eve did when they covered themselves with fig leaves after they ate the forbidden fruit in the Garden. No, we need to come clean and be real.

The Christ of Christmas is real. He’s “the way, the truth, and the life” (John 14:6). Everything we pursue outside of him, his grace, and his will, ultimately proves to be an illusion – unsatisfying to the longings of the human spirit – unreal.

Christmas is a time to get real.