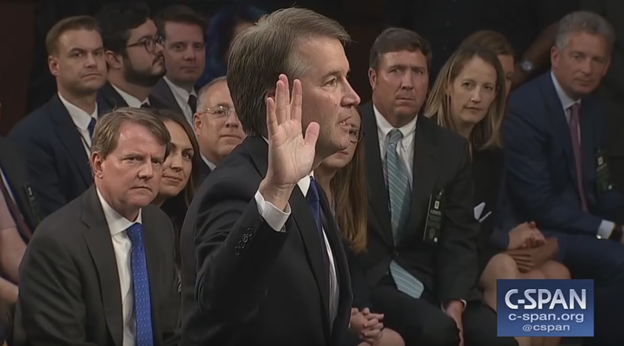 WASHINGTON, D.C. – Thursday, at the nation’s Capital Building it was a day of high-drama as Dr. Christian Blasey Ford, and Judge Brett Cavanaugh testified before the Senate Judiciary Committee.

Ford, with her voice trembling at times, said Supreme Court nominee, Judge Brett Kavanaugh, sexually assaulted her when they were both high school students in 1982. She provided some detail about what she thought at the time was an attempted rape by Kavanaugh. She admitted that there were gaps in her memory about what home she was at when the alleged sexual assault occurred, how she got there, and how she departed. Nevertheless, she insisted she was 100% certain that her attacker was Brett Kavanaugh.

Ford testified that the alleged attack had left her with anxiety, phobia, and PTSD-like symptoms, especially the four years of her life after high school. She said when she went away for college she believed that her academic struggles, her difficulty forming friendships, especially with boys, as a student at the University of North Carolina, Chapel Hill, were all related to the assault.

In an impassioned speech, sometimes doused with tears, Judge Kavanaugh categorically denied Ford’s testimony. He chided the Judiciary Committee for waiting 10 days to set up a hearing whereby he could respond expeditiously to the charges. He argued during those 10 long days, the political Left and the media, were allowed ample time to harm his impeccable reputation, his family, the Supreme Court, and the country. He charged that certain members of the committee had supplanted the Senate’s role of “advise and consent,” with “search and destroy.”

Kavanaugh said he didn’t question whether some person had sexually assaulted Dr. Ford in some place and at some time. “But I have never done this to her or anyone. That’s not who I am; it is not who I was. I am innocent of this charge. I intend no ill will to Dr. Ford and her family,” he said. “The other night, Ashley [his wife] and my daughter Liza said their prayers. Little Liza, all of 10 years old, said to Ashley, we should pray for the woman. That’s a lot of wisdom from a 10-year-old. We mean no ill will,” Kavanaugh told the committee.

Sen. Lindsey Graham (R-South Carolina) provided an emotional rebuke to Democrats. Graham contended that what was being done to Kavanaugh by Democratic members of the Judiciary Committee was the most “unethical sham” he had ever witnessed in his long political career.

With lividity, Graham faulted Democrats for sitting on Ford’s accusations until just before the vote on Kavanaugh’s confirmation. He said Sen. Dianne Feinstein (D-California) was well-aware of Ford’s allegations against Kavanaugh as far back as July. But, Graham said she and other Democrats held back until the last minute with the objective of scuttling Kavanaugh’s nomination. He said their purpose was to deny the President ample time to make another nomination before the mid-term elections, while also hoping to take control of the Senate after the election, and thereby also denying President Trump another chance to fill a seat on the Supreme Court.

“Boy, you all want power. God, I hope you never get it. I hope the American people can see through this sham. That you knew about it and you held it,” said Graham. He added Democrats never had any intention of protecting Dr. Ford either and that she was just as much a victim of their unprincipled devices as Kavanaugh.

Friday, the Senate Judiciary Committee voted along partisan lines to advance Kavanaugh’s nomination to the Senate floor by a slim margin of 11-10. But before the vote, Sen. Jeff Flake (R-Arizona) met with Democrats and afterward unexpectedly declared that he believed a full vote by the Senate should be delayed for at least a week to allow for an FBI investigation of Ford’s allegations. He said he would support Kavanaugh, but he could not vote in the affirmative to confirm the Judge without the new FBI investigation.

Republicans Flake, Senators Susan Collins (ME), and Lisa Murkowski (AK), are votes that Republicans want. Republicans can only afford to lose one vote. There are also three Democrats living in Red states that voted for the last Trump Supreme Court nominee Neil Gorsuch: Senators Joe Donnelly (IN), Heidi Heitkamp (ND), and Joe Manchin (WV). Republicans covet the vote of any or all of these Democrats for getting Kavanaugh safely over the confirmation line.

Therefore, Republican leaders agreed to the one-week delay and President Trump has ordered a supplemental FBI investigation of Ford’s allegations against Kavanaugh.

Earlier this week (Tuesday), the Christian Action League issued a call for supporters and friends of the League to pray about Kavanaugh’s nomination and its related issues.

The League is now issuing a second call.

“A conservative nominee like Judge Kavanaugh is the primary reason evangelicals voted for Trump as President,” said Creech. “The Constitution doesn’t provide the kind of authority the courts have been afforded in recent years. The High Court has erroneously overruled more than 30 states on same-sex marriage. Our nation is among at least seven countries in the world (including North Korea and China) that have the most extreme abortion laws. There are serious issues of religious liberty that are likely to be taken up shortly. Kavanaugh, admittedly, will tip the scales away from the judicial activism we’ve seen all-too-often. I don’t know if the court will overturn Roe v. Wade or Obergfell v. Hodges, but one thing is for certain, that will likely never happen without a Judge like Brett Kavanaugh. The Left understands he could change everything and that’s why they seem willing to do anything to stop his nomination. So we must earnestly persevere in our prayers until the end.”

The Christian Action League encourages times of prayer about the Kavanaugh confirmation:

The Scriptures promise, “This is the confidence we have in approaching God: that if we ask anything according to his will, he hears us (1 John 5:14).”