You are here: Home / Rev. Creech's Commentary / Something You Cannot Escape

American conservative radio commentator, someone that ABC News once said was “the most listened-to newsman in the world,” Paul Harvey, told a remarkable story about a woman trying to escape the ravages of a hurricane.

Harvey said after Hurricane Andrew devastated South Florida, Patricia Christy was waiting in line for food. She vowed to herself that she was going to get out of that state. She was leaving on the first plane out and was determined to get as far away from the horror of hurricane damage as possible – then have a restful vacation.

In his newscast, Harvey reported he had just heard from Patricia Christy. She was standing in line for fresh water on the Hawaiian island of Kauai, having just gone through Hurricane Iniki.

We can never escape what God has ordered no matter how hard we try.

Somerset Maugham used to tell a story similar to Paul Harvey’s, but one of profound consequence. He wrote about an Arabian merchant who sent one of his servants to the city of Baghdad for provisions. The servant wasted no time in returning quickly to his Master and reporting that he had seen Death in the marketplace making a threatening gesture at him. He begged for a horse that he might escape to the distant town of Samara.

That same day the merchant went to the marketplace. Seeing Death, he asked the foreboding figure why he had earlier made a threatening gesture at his servant.

Death replied, “That was no threatening gesture. That was a start of surprise. I was astonished to see him in Baghdad because I have an appointment with him tonight in Samara.”

Death and Judgment are uncomfortable topics, but we cannot escape them no matter how we deny, devise, or detract from them. They are unavoidable.

Voltaire was a renowned French philosopher and agnostic in his day. When he was in good health, he claimed that Christianity was good for chambermaids and tailors to believe in, but not for people of education and wisdom. Nevertheless, when he was sick and at death’s door, he called upon his physician, saying, “I am abandoned by God and man. I will give you half of what I am worth if you will give me six months of life. Then I shall go to hell, and you will go with me. O Christ! O Jesus!” Voltaire couldn’t escape death and judgment.

Death is around us every day, and the Scriptures teach that after death comes the Judgment of God (Hebrews 9:27).

Recently, my sister-in-law turned 60-years old. I was amused when she told my wife, “I thought it would take a lot longer than this.” Indeed, life is brief even though most of us act as if we will never die. Yet every moment of life we move closer and closer to life’s end and the moment when we will have to stand before God and account for our lives.

Nations die and experience the judgment of God too. Psalm 9:17 solemnly warns, “The wicked shall be turned into hell and all the nations that forget God.”

Sometimes I tremble for America. We seem to think that we can act in defiance of God’s order – that we can ignore his sovereignty. Although many never state it outwardly, our behavior is indicative of the erroneous notion that we are big enough to shake our fist in the face of a holy God and escape his judgment.

Rome rose to incomparable greatness in her day. People thought that magnificent Empire would be around for centuries to come, but God judged Rome for its wickedness and great was its fall. Greece was the first to attempt democracy. It became the envy of the world for its splendid architecture and its dazzling list of philosophers such as Socrates, Plato, and Aristotle. Still, God judged Greece for its sin and mighty was its collapse. The Mayan’s were known to achieve something as complex and advanced as brain surgery. They excelled in various sciences, but God judged them for their evil ways and now they are a mere shadow of themselves. 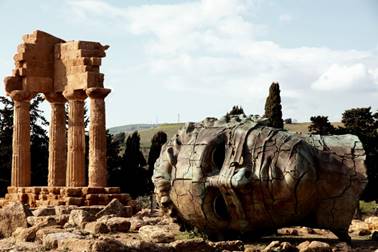 No culture can sin against God with impunity. Moreover, God always judges nations in this life, and not the next one.

Some misinterpret God not immediately responding in wrath to mean their aberrant conduct is alright. Hardly! It only means God is longsuffering and patient and is “not willing that any should perish, but that all should come to repentance” (2 Peter 3:9).

Dr. Graham has also beautifully written, “Few people have met the ruler of a kingdom or a head of state. But the power of those leaders is real and it affects all who live under their governance. Jesus Christ governs with love that demands obedience. His great love calls us to the foot of His cross so that we may receive His pardon for our transgressions. The Bible says, ‘Let the peace of God rule in your hearts’ (Colossians 3:15).”

If we repent of our sins and receive Christ as Lord, then the peace of God can rule in our hearts. This peace with God will also be extended to our nation. But outside of this, there is only death and judgment, and we will not escape it.