You are here: Home / Alcohol / Senate Poised to Take-up Tax Reform Next Week, Proposal Could Provide the Alcohol Industry with Ridiculously Low Taxes 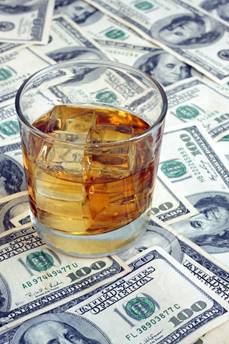 With tax reform on the table in Congress, Americans sitting down to Thanksgiving dinner may be wondering if proposed laws would leave them more or less to give thanks over next year. Whatever the case with overall reform, alcohol industry watchdogs suggest that citizens not wait until the holiday is over to urge their senators to oppose the so-called “Craft Beer Modernization and Tax Reform Act of 2017.”

“This dishonest federal measure is being portrayed as an incentive for small craft brewers,” Bruce Lee Livingston, executive director of Alcohol Justice, said via a press release. “But the real winners are the largest beer and spirits producers in a race to cut their already ridiculously low tax rates.”

If the Senate, poised to take up tax reform early next week, passes the bill with its current language, the government would lose $177 million in excise taxes to the distilled spirits industry, $126 million to brewers and $18 million to winemakers, the group reports.

“This bill is extremely bad on its face, especially when you consider all the harm that alcohol does to our society. Excessive drinking costs us an estimated $223.5 billion in the U.S. every year, and there is no way to even calculate the pain and suffering,” said the Rev. Mark Creech, executive director of the Christian Action League. “To imagine that lawmakers could, for even a moment, consider reducing alcohol taxes is ludicrous.”

Studies show the value of federal excise taxes on alcohol has dropped 43 percent since the rates were last raised in 1991, even as the costs for alcohol-related harm soars.

Creech said taxes on alcohol, across the nation and in the Tar Heel state, need to be raised not lowered.

“North Carolina has provided many new markets for alcohol, and adding taxes to these products would help curb dangerous consumption levels,” he said.

He cited an Alcohol Justice report that suggests that doubling the federal excise tax would result in a 35-percent decrease in alcohol-related mortality, an 11-percent reduction in deaths from vehicle crashes, and significant drops in sexually transmitted infections, violence and crime.

Similar to the federal alcohol taxes, North Carolina’s beer excise tax, at .62 per gallon, is also behind the times. It last changed in 2009 and has lost 9 percent of its value. If it were raised just 4 cents per gallon, to keep pace with inflation, it would increase excise tax revenue more than $7.6 million and bring in another $199,000 in sales taxes per year.

Creech said upping Tar Heel taxes by a dime per gallon across beer, wine and distilled spirits would bring in an estimated $22.4 million in additional revenue to battle alcohol-related harm. That same increase at the federal level would net $747 million.

“You will rarely see the Christian Action League support a tax increase, but alcohol is an exception because of the harm it causes, the ‘free pass’ big alcohol has gotten for years and the need to force the industry to start paying for much of the harm it causes. Perhaps we shouldn’t refer to it as a tax but instead a ‘user’s fee.’” he added.

But Creech said the most important action residents can take right now is to ask their U.S. senators not to approve an alcohol tax reduction.

“We need thousands of folks to go to the Alcohol Justice web site and click the Take Action button at the bottom of the page. They can type in their zip code to find out who represents them in Washington and then phone their lawmakers and urge them not to sign any bill that would reduce taxes on the alcohol industry.”