You are here: Home / Christian Action League / Senate-Approved ‘Brunch Bill’ Would Serve Up a Host of Harms 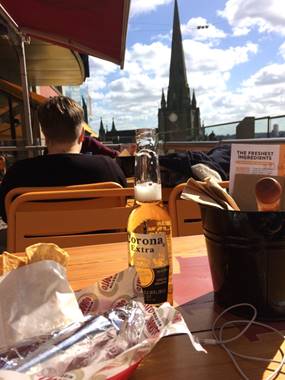 RALEIGH – The “brunch bill,” passed by the North Carolina Senate 32-13 on Thursday and now headed to the House, earned its name because it paves the way for Sunday-morning alcohol sales. But according to the Rev. Mark Creech, executive director of the Christian Action League, the seven pages of proposed legislation serves up a lot more than a Sunday mid-morning drink.

“House Bill 155 makes so many changes in alcohol policy that we believe can be dangerous to the public health,” he told lawmakers on the Senate Rules Committee Thursday, outlining how the bill could exacerbate underage drinking, undermine the Alcoholic Beverage Control system of limiting spirits sales to ABC stores and loosen distillery regulations so much that liquor is treated much the same as beer and wine.

“We have never seen them as equals. We have always seen liquor as potentially more problematic, and this is why we have ABC stores,” Dr. Creech said.

The bill, promoted by the state’s growing number of distilleries, would allow the companies to sell five bottles of their product a year to customers who tour their facilities and allow for liquor tastings at off-site events with a $200 permit. Auctioneers who purchase a $750 event permit could auction off wine and liquor, and rules on rebates for alcoholic beverages would be loosened.

Officials from distilleries — there are 45 in operation across the Tar Heel state, with 22 more in the works — say the measure, titled “Economic & Job Growth for NC Distilleries,” would increase their bottle sales 150 percent. Similarly, the N.C. Restaurant and Lodging Association says the bill would bring eateries an additional $25 million a year.

But Creech implored legislators to consider more than money in their decision. He said the provision that would allow distilleries to ship their products out of state could lead to more underage drinking.

“The June 2015 Report to Congress on the Prevention of Underage Drinking cited interstate shipments to individuals, which are mostly done online, as a significant source for underage drinkers. A study in North Carolina has confirmed the same,” Creech said.

Shipping liquor beyond state lines could lead to having more of it shipped in. The Commerce Clause of the United States Constitution and a ruling by the U.S. Supreme Court in Granholm v. Heald essentially says if distilleries in North Carolina can supply liquor to individuals outside of our state, then distilleries from other states must be allowed to send their products to North Carolina.

Potential drinkers who don’t order it online would still be more likely to encounter liquor under the new bill, which would allow for tastings at festivals or other events.

Dr. Creech said the brunch bill does a disservice to churches, which have long picked up the pieces of lives shattered by substance abuse. He said churches were once so respected that alcohol sales were not allowed during the worship hour.

“When we consider churches spend significantly of their finances and labor intensively to people whose lives have been seriously injured by alcohol abuse, when we consider the indispensable services to healing, helping, remolding and rebuilding much of what’s been lost, it’s not too much to expect that this respect might continue,” he told the Senate Finance Committee Wednesday.

“Mind you, these services by the church save taxpayer dollars that would otherwise be employed by state government in social services and public assistance programs. What the church offers is for free and quite effective.”

Creech characterized the bill as sensitive to business interests, but insensitive to churches and said that it “undercuts the kind of environment that supports their efforts to have a maximum impact for good.”

Under the proposed bill, municipalities and counties could approve alcohol sales beginning at 10 a.m. on Sunday mornings, not only at bars and restaurants, but at all retail outlets that sell alcohol. Creech said lawmakers made a good decision when they removed a provision that would have allowed for liquor tastings at ABC stores. Still, he said the measure is harmful to the public health and he is hopeful it will meet with resistance in the N.C. House.