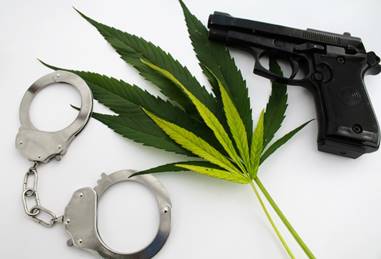 Mention marijuana and most people picture a happy and harmless stoner slumped on a couch with few cares and even less ambition. But at least two studies released in the past 18 months reveal growing evidence of links between cannabis use and violence.

Late last month, researchers from Montreal, Canada, studying the habits of 1,136 recently discharged psychiatric patients reported that those who consistently used cannabis were 2.44 times more likely to display violent behaviors than their counterparts who did not use the drug.

“The persistent use of cannabis over time showed a more constant relationship for violence than alcohol and cocaine use,” the researchers reported in the September issue of the peer-reviewed journal “Frontiers in Psychiatry.”

Knowing that substance abuse has long been associated with an exacerbation of psychiatric symptoms and that cannabis use is highly prevalent among psychiatric patients, the authors of the study set up a five-assessment system to examine the drug’s effects over time.

“These findings are particularly relevant as they suggest that the longer individuals report having used cannabis after a psychiatric discharge, the more likely they are of being violent in the following time waves,” they reported.

Further, the study showed that the association between cannabis use and violence was “unidirectional,” in other words the cannabis use predicted future violent behavior, not the other way around.

“This is significant because so often reports showing a connection between violence and drug use are explained away by those who argue that violent people are simply more apt to use drugs,” said the Rev. Mark Creech, executive director of the Christian Action League. “While that may be true, this study makes it clear that the marijuana use precipitated the violence.”

In fact, researchers involved in the study theorized that “an earlier age of chronic onset of cannabis use (more specifically before brain maturation: prior to 16 years old) could deteriorate neural structures associated with inhibition and, thus, lead to an increased risk of developing adult antisocial behaviors.”

Their results were consistent with a study reported in the “Psychological Medicine” journal early last year. That 50-year experiment concluded that continued use of cannabis causes violent behavior as a direct result of changes in brain function.

Neuroscientist Tabea Schoeler at Kings College London and her colleagues told “Psychology Today” that the results of the study, which tracked 411 boys from early childhood to middle age, “provide support for a causal relationship between exposure to cannabis and subsequent violent outcomes across a major part of the lifespan.”

Unlike the Canada study, the subjects in this experiment were not psychiatric patients, but children of two-parent households born around 1953 and living in London’s working-class urban neighborhoods.

Most of the participants in the study never used cannabis and were never reported to have violent behavior. Thirty-eight percent of them tried the drug at least once, and 20 percent of those who started using by age 18 continued to use it through middle age. More than a fifth of those pot smokers reported violent behavior that began after beginning to use cannabis. Only .3 percent reported violence before they began using the drug.

Furthermore, continued use of cannabis as the years went by led to subjects becoming seven times more likely to commit a violent crime.

“Anyone who believes that using marijuana is an effective or safe way to relax needs to think again,” said the Rev. Creech. “Sadly, this drug that has a reputation among some as a painkiller or a harmless pastime, is truly a path toward more pain, whether it’s by addiction, by damaging brain cells or by causing violent behavior.”

He said those hoping to keep their children or other loved ones away from substance abuse should acquaint themselves with the most recent studies about marijuana and other drugs and be on the lookout for violent behavior that could be a sign of an ongoing problem.

“So often, the use of illegal drugs and even some legal ones, such as alcohol, lead to a vicious cycle. Drug users are more likely to be violent and victims of violence are more likely to abuse substances,” Creech said. “As Christians, we must intervene as early and as often as possible to help those trapped in the cycle to escape.”

Dr.  Creech added, “I think it’s also interesting that at time when more states are considering the legalization of recreational marijuana, we’re seeing more studies conclusively showing the significant dangers to public health that come with the use of cannabis. North Carolina has had legislation introduced for medicinal marijuana every year since 2008. This is the wrong direction for our state. More legalized marijuana is the wrong direction for America.”