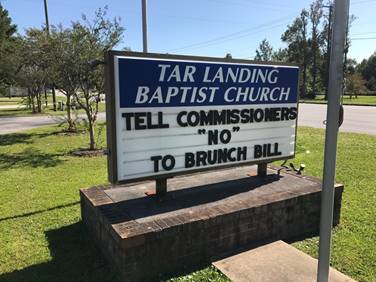 ONSLOW CO. – The Onslow County Board of Commissioners have rejected a proposed Brunch Bill Ordinance. The initiative was defeated by a 3-2 vote earlier this month, September 6th.

Commissioners Robin Knapp and Paul Buchanan voted in favor of the measure, while commissioners Royce Bennett, Mark Price, and Chairman Jack Bright voted against it.

“We are living in a time in our country where it isn’t popular to offer objections to some scheme to make alcohol more accessible. If you do, you’re treated like a member of the flat earth society. But you don’t need to be a neo-prohibitionist or even very religious to see that alcohol is not an ordinary commodity. It’s a recreational drug that presents dire consequences for communities. The science of the matter is overwhelming – scrupulous controls are necessary to protect the public’s health. The three who voted against the Brunch Ordinance in Onslow County did their jobs and protected their community’s well-being from over-zealous business interests.”

In June, the North Carolina General Assembly passed SB 155-ABC Omnibus Legislation, which the media dubbed as the “Brunch Bill.” Gov. Roy Cooper signed the bill within three days. The legislation loosened controls on the time when bars, restaurants, and retail outlets could begin alcohol sales on Sundays. It rolls back the time from 12:00 noon to 10:00 a.m., provided that Town and City Councils or County Commissioners approve an ordinance to that effect.

The Christian Action League was a primary opponent to the Brunch Bill when it was taken-up by state lawmakers, and continues its resistance by speaking out, as well as by equipping churches and other concerned citizens to do the same.

According to the Jacksonville Daily News (JDN), six people stood during the public comment period and asked commissioners not to approve the proposal.  JDN said the statements by the opposition included the following arguments:

“Tourism wouldn’t be affected because it’s unlikely someone would choose not to go somewhere just because they had to wait until noon to drink on a Sunday.”

“Alcohol can have deadly consequences.”

“Vacationers should have a good time when they come here but if they decide to have one more drink before getting on the road to drive home, they could risk others’ lives.”

“The amount of revenue it would make for the county is minuscule.”

“If one life was lost because of passing the bill it wouldn’t have been worth it.”

JDN also states that only one person stood to speak in favor of the Brunch Ordinance, Dan Whitten, who reportedly “argued that if he, like others, got off work early in the morning and wanted to have a glass of wine with his pasta at Olive Garden after on overnight shift, he should be allowed to do so.”

Commissioner Royce Bennet, who voted against the bill made a well-reasoned and passionate speech against its approval. Bennet said:

“When I voiced my opinion, one of the first people that I spoke to said; ‘You need to take off your religious hat and consider how much revenue this will mean for Onslow County.’  So, that’s what I did. I went back to my office and started researching.  I started finding studies about the dangers of alcohol, studies about the costs of alcohol abuse, dozens of studies.  Studies from the National Institute of Health, National Institute on Alcohol Abuse, National Institute of Drug Abuse and the Centers for Disease Control.  You’ve heard most of the statistics here tonight.  Alcohol abuse costs our county, state, and country billions of dollars every year – deaths, crime, drunk driving, marital discord, spousal abuse, child abuse, all resulting from alcohol.  But, do you know what I didn’t find?  Not one single study that says alcohol is good for society.  Not one single study that says selling more alcohol will benefit the citizens.  Not one single study that says selling alcohol for two more hours a week will benefit Onslow County.”

Tar Landing Baptist Church, which is located on the Richlands Highway in Jacksonville, took a public stand against the Brunch proposal. Their church had a message on the church sign urging citizens to voice their objections. The sign read, “Tell Commissioners “No” to Brunch Bill.”

Jack Marshburn, the church’s pastor, said he emailed the commissioners about his concerns. The church circulated a petition and provided it to commissioners before their meeting. The church added a CD of Marshburn’s recent sermon, “Why I am a Teetotaler.”

The JDN says the issue could resurface again.