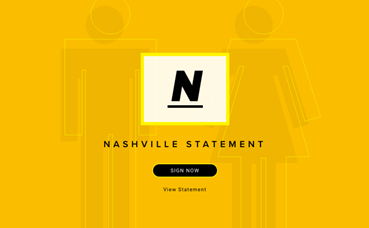 It’s called The Nashville Statement and it articulates God’s design for human sexuality. Sponsored by the Council on Biblical Manhood and Womanhood (CBMW) and the Ethics and Religious Liberty Commission, the statement was announced on Tuesday.

The Preamble to the Nashville Statement declares its primary purpose:

“Evangelical Christians at the dawn of the twenty-first century find themselves living in a period of historic transition. As Western culture has become increasingly post-Christian, it has embarked upon a massive revision of what it means to be a human being. By and large the spirit of our age no longer discerns or delights in the beauty of God’s design for human life. Many deny that God created human beings for his glory, and that his good purposes for us include our personal and physical design as male and female. It is common to think that human identity as male and female is not part of God’s beautiful plan, but is, rather, an expression of an individual’s autonomous preferences. The pathway to full and lasting joy through God’s good design for his creatures is thus replaced by the path of shortsighted alternatives that, sooner or later, ruin human life and dishonor God.”

The statement contains fourteen articles of affirmations and denials, which clarify the biblical teachings on marriage, chastity outside of marriage, fidelity within marriage, the divinely ordained differences between male and female, homosexuality, transgenderism, and that these teachings are essential to an authentic presentation of the Gospel. It also calls upon Christians to speak in love regarding these contested issues, as well as to declare that, in Jesus Christ, there is forgiveness for all sexual sin and the power to live one’s life in purity.

“The Nashville Statement is a Christian manifesto concerning issues of human sexuality,” said John Piper. “It speaks with forthright clarity, biblical conviction, gospel compassion, cultural relevance, and practical helpfulness. It will prove to be, I believe, enormously helpful for thousands of pastors and leaders hoping to give wise, biblical and gracious guidance to people.”

The statement has caused a backlash among liberal clergy.

The Raleigh News and Observer reported this week that Nancy Petty, pastor of Pullen Memorial Baptist Church, a church that the Southern Baptist Convention expelled in 1992 for its blessing of a same-sex union, was incensed.

“They call it a ‘manifesto.’ White supremacists issue manifestos. And they want to say that this is biblical, but it’s not,” she added to the N&O. “I have people in the church who are trying to heal from this stuff that they got their whole lives, growing up in these churches that just heaped this spiritual abuse on them Sunday after Sunday. And it makes me so angry that people who are good, God-loving people, who are doing everything they can to live into being who God created them to be, constantly has somebody saying to them, ‘You’re not good enough. There’s something wrong with you.’”

Dr. Mark Creech, executive director of the Christian Action League, said that Petty’s words and those like her are to be expected. “They ring more of conviction of personal sin than they do compassion for others as claimed,” he said.

“Petty, who is married to a woman, and is involved in every misguided cause from LGBTQ rights to Moral Mondays is a blind leader of the blind, a wolf in sheep’s clothing. Her argument is one of distraction, not dealing with the issue and certainly not from a biblical perspective, but instead fiercely labeling those who disagree with her as ‘White supremacists.’ How crass, as well as desperate! This is why the Nashville statement is so important. It’s critical in this age of apostasy and unsound doctrine that Christian leaders separate themselves, not in a Pharisaical manner, but in the interest of preserving the truth and saving the masses from the consequences of following such false leadership,” said Creech.

Creech added that he thought the statement was a lot like the Declaration of Independence. “I think it states the way to real sexual freedom. Liberty is always found in abiding in God’s intent, and in his will. To live otherwise is to follow a lie and live in bondage,” he said. “When I signed the Nashville statement I wish that I could have signed my name to it like John Hancock did, in a huge bold font, ever declaring ‘this is the way of the Lord, walk ye in it.’”