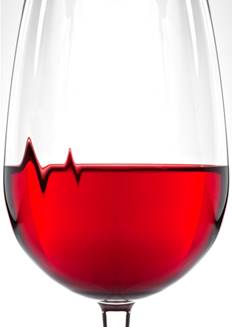 In my newly renovated neighborhood grocery store, shoppers now have access to a buffet, coffee shop, and a wine bar complete with a widescreen TV. During construction, I had asked the young man who was my cashier what was being built in the middle of the store. He said, “A wine bar. There’s nothing like shopping while under the influence!”

Serving alcohol in your local grocery store is only logical since moderate drinking has been deemed good for your health, right? So you can enjoy your wine and toss a bunch of organic carrots into your shopping cart and know you are doing the healthy thing.

But some researchers have recently begun to re-examine the data that encouraged moderate drinking as a health benefit.

In the UK, the British Broadcasting Corporation reported on May 23 that more evidence has emerged concerning the link between alcohol use by women and an increased risk of breast cancer. They said that according to a report from the World Cancer Research Fund, half a glass of wine or a small beer a day increases the risk.  The analysis of more than 100 studies that examined the medical histories of 12 million women reinforces the current advice to be aware of alcohol consumption. Evidence in the research indicated that drinking an extra small glass of wine every day (10g of alcohol) increases a woman’s risk of breast cancer after menopause by 9%.

New guidelines were announced in the UK in 2016 recommending men and women should drink no more than what they call 14 units a week. That is the equivalent to six pints of beer or seven glasses of wine. They also recommend that some days should be free of alcohol altogether. And of course, pregnant women are advised not to drink at all. The BBC said the UK’s chief medical officer’s recommendation was based on research which showed that any amount of alcohol can increase the risk of cancer. Even so, many experts in Britain felt the research does not warrant total abstinence from alcohol.

Here in the US, CNN also announced the findings of the same report. CNN stated, “Now, a new report from the World Cancer Research Fund and the American Institute for Cancer Research reveals just how much of a risk daily drinking might pose for both premenopausal and postmenopausal women.”

They quoted Dr. Anne McTiernan, a lead author of the new report and a cancer prevention researcher at the Fred Hutchinson Cancer Research Center in Seattle. “…an average of 10 grams of alcohol a day — equivalent to a small glass of wine, an 8-ounce beer or 1 ounce of hard liquor — is associated with a 5% increased breast cancer risk in premenopausal women and 9% increase in postmenopausal women.

“I was most surprised by the alcohol result, that risk increases at just one drink a day, on average,” McTiernan said. “The increase with one drink a day was small … but the risk goes up from there. So that’s why AICR recommends no more than one alcohol drink a day for women to reduce risk for cancer.”

CNN also quoted a researcher at the University of Houston’s Center for Nuclear Receptors and Cell Signaling, Chin-Yo Lin, who says the explanation of the link between alcohol use and breast cancer may be explained that “in exposed tissues, alcohol is converted into acetaldehyde, a chemical that can cause mutations in DNA, which can potentially lead to cancer.”

He also noted that “Alcohol consumption is also associated with elevated levels of the female sex hormone estrogen. Excessive cumulative exposure to estrogen is a major risk factor in breast cancer. A number of studies have shown that alcohol can enhance the actions of estrogen in breast cancer cells.”

As a cancer patient myself, I can say that many women who have been diagnosed with breast cancer know that some breast cancer cells do test positive for hormone receptors and as a result have to take anti-hormonal drugs.

With all this information available, I am amazed that any breast cancer patient or survivor would consider consuming alcohol, yet I have been to social functions involving breast cancer survivors and seminars on breast cancer where the wine and beer flowed freely. Hopefully this new report will get the attention of the medical and health professionals who are advising cancer patients on the best strategy for combating their disease, and bring the issue of alcohol consumption into the discussion of cancer prevention.