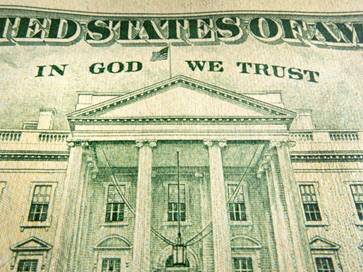 RALEIGH – Thursday, the North Carolina House overwhelmingly approved legislation that would require the display of the National and State Mottos in a prominent location in North Carolina public schools.

The National Motto, which was approved by Congress in 1956 reads, “In God We Trust.” North Carolina’s motto, “Esse Quam Videri”, was approved by the state legislature in 1893 and means, “To Be Rather than to Seem.”

The bill calls for the State Motto to be posted in both Latin and English.

The legislation, HB 965 – National and State Mottos in Schools Act, precipitated a spirited debate on the House floor.

The champion of the initiative, Rep. Bert Jones (R-Rockingham) said that he strongly believed that young people in the state should know the patriotic history of their country.

In the interest of transparency, he informed members of the House that the American Civil Liberties Union (ACLU) was opposed to the measure. The ACLU believes, argued Jones and quoting them, “This is a divisive and unnecessary display that sends a message to students that they are second-class citizens and not welcome.”

Jones added, “If you believe that, then don’t vote for this bill. But I believe most North Carolinians would agree this is a reasonable expectation that should be taught to our students.”

Jones contended that anytime the name of God is mentioned, it’s divisive. “I would just remind us that this is the Natioal Motto of the United States,” he said. “It does not compel anyone to worship God.”

Rep. Verla Insko (D-Orange) was the primary voice of opposition to the bill. Insko noted that E Pluribus Unum, which means “Out of Many, One,” was considered the first motto of the United States, but was not codified by law. She said she thought this motto was better than “In God We Trust” because “we need to respect our diversity and still get along.”

“The God I worship is just fine with that because God speaks many languages and has presented Himself or Herself to people in different ways. And that spiritual life is real. So for us to indicate that there is only one way to communicate with God is, I think, very narrow,” Insko maintained.

But Rep. Dean Arp (R-Union) rose to say he didn’t believe Insko’s contentions were germane to the bill. “We’re talking about displaying the Motto that exist,” said Arp, “not the one that Rep. Insko wishes would be displayed.”

Arp also pointed out that displaying the National Motto has been upheld in several federal court decisions. He cited the 1970 U.S. Ninth Circuit Court of Appeals case, Aronow v. United States, which ruled the United States Motto is constitutional.

In that case, the Court ruled:

“It is quite obvious that the national motto and the slogan on coinage and currency ‘In God We Trust’ has nothing whatsoever to do with the establishment of religion. Its use is of patriotic or ceremonial character and bears no true resemblance to a governmental sponsorship of a religious exercise. …it is excluded from First Amendment significance because the motto has no theological or ritualistic impact. As stated by the Congressional report, it has ‘spiritual and psychological value’ and ‘inspirational quality.’”

Rep. Larry Pittman (R-Cabarrus) said the Establishment Clause of the First Amendment doesn’t prohibit God from being mentioned in the public square. Instead, it says that no particular religion is to be established by Congress as the one to which everyone must adhere.

“Our children need to know the history of our nation and state,” concluded Pittman.

Dr. Mark Creech, executive director of the Christian Action League said that “In God, We Trust” appeared for the first time in 1864 and received formal Congressional approval the following year. In 1865 Congress enacted legislation authorizing the motto be placed on our nation’s coinage. There was a lot of interest in doing this because of the events of the Civil War when repentance and trust in God were major themes. The Motto was temporarily dropped in 1907 when President Theodore Roosevelt authorized new coins be designed without the Motto. But Congress responded the following year to restore the Motto. In 1955 Congress extended the act by requiring it not only be placed on all coins but paper money too. The following year, Congress officially made “In God We Trust” the National Motto.

“Our National Motto is inscribed in the House and Senate chambers in Washington,” said Dr. Creech. “It’s on the walls of the Capitol Dome. The National Motto’s declaration should be engraved not simply in stone but on the hearts and minds of our citizens, signifying our true strength and heritage as a people.”