You are here: Home / Christian Action League / How the Loud Left Hijacked Hate 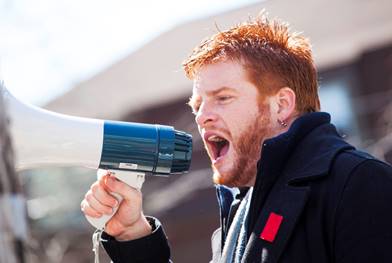 One of the most insidious impacts of the “progressive” movement of the last 20 years is the way the voices of the liberal left have imposed politically correct language on the American public by creating new meanings for old words.

For example, in an attempt to quash reasoned dialogue on important cultural and moral issues, the misuse of the word “hate” has worked very well for the left against conservative Christians. Most Americans – especially Christians – recoil at the idea of hating people. Rightfully so. Therefore, if one can establish hate as the motive for opposing a particular issue or behavior, it sabotages any real debate. End of discussion.

The progressive parade is crowded with societal movers and shakers. They control much of our culture – media, education, entertainment, business, and government. The legions are led by a fervent few, religious zealots in their own right.

Their religion is called secular humanism. For them, man is god, and there is no higher power to answer to. They reject Christianity and the morality of the Bible unless they can co-opt and twist it to further their own agenda. Their goal? To crush Christianity and rob it of its historical and traditional impact on our nation.

And it is working within and without the church.

Let’s look at how progressives use the concept of hate against Christians. Think about this for a moment. The idea of hate has no meaningful context outside a biblical one. In other words, if God doesn’t exist to reward and punish, what difference does it make if I hate someone? Why is it wrong? It’s wrong because there is a God, and He defines love and hate.

In fact, God has charged His followers to spread the word that He loves all people and calls them to turn away from their sin and seek Him. When we do this, however, we almost always run into conflict with the progressives’ rejection of God and His standards.

For example, when it comes to human sexuality, progressives have done a masterful job of seemingly turning Christianity against Christians. How? By convincing the general public – and even many Christians – that to speak against homosexuality or transgenderism is in fact hateful. Thus, Christians must be haters, even though their Bible and their creeds teach love. It’s akin to saying that because Christians believe drunkenness is a sin, we, therefore, hate the person who is drunk. The teaching of “hate the sin but love the sinner” is not allowed by the progressives.

One illustration of this is North Carolina’s HB 2, which simply states that on government property, one must use the restrooms, showers, and changing areas that match one’s biological sex. Progressives immediately denounced and declared it a hate bill. End of debate.

Then there are many stories of businesses owned by Christians being told they must participate in homosexual wedding ceremonies or be closed down. Those Christian business owners were motivated by hate, said the progressives. End of discussion.

In Mississippi, where I live, the legislature passed, and the governor signed, a law protecting people of faith from being forced to participate in homosexual weddings. That law, according to the progressives, is a sign of hatred toward lesbians and gays.

It’s hard to fight back against a barrage of lies when they’re repeated 24/7 by the liberal media, and when well-funded LGBTQ activist groups pound on the doors of politicians and corporate executives demanding support and promising punishment if they dare side with those hate-filled Christians.

Unfortunately, many weak-kneed Christians quickly fold on this issue. They either distance themselves from their fellow Christians or they go silent. In either case, it’s shameful and cowardly.

The Bible is clear that the act of homosexuality is a sin. That has been the teaching of the church for 2,000 years. But subscribing to this teaching today, according to progressives, is unacceptable in this new world they are attempting to create. A world without the Christian God, but rather man, as supreme.

The truth: Christians do not hate lesbians, gays, or transgendered people. God loves sinners and calls us all to repentance. But true Christianity refuses to call right wrong or wrong right, and stands on the Word of God, proclaiming the truth therein.

This article was slightly edited and posted with permission from the American Family Association.