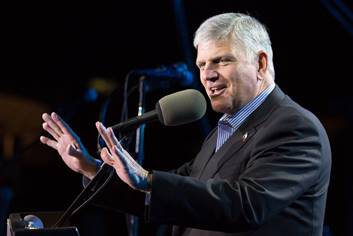 Leading evangelist Franklin Graham and other social conservative leaders are speaking out against North Carolina Gov. Roy Cooper’s signing of an executive order that critics say will force some businesses and state entities to allow biological men into women’s restrooms and changing facilities.

“North Carolinians have been betrayed by Governor Roy Cooper,” Graham, a North Carolinian and the son of famed evangelist Billy Graham, wrote in a Facebook post on Monday, commenting on the non-discrimination executive order that Cooper signed last Wednesday.

Executive Order No. 24 requires that state agencies under control of the governor to adopt policies that do not block, deter, or impede or prohibit “any individual who lawfully uses public facilities under their control or supervision, in accordance with that individual’s gender identity.”

Additionally, the order calls for companies who contract with the state to adopt an LGBT nondiscrimination policy that prohibits discrimination on the basis of gender identity and sexual orientation among other identifiers. Read the rest of this entry