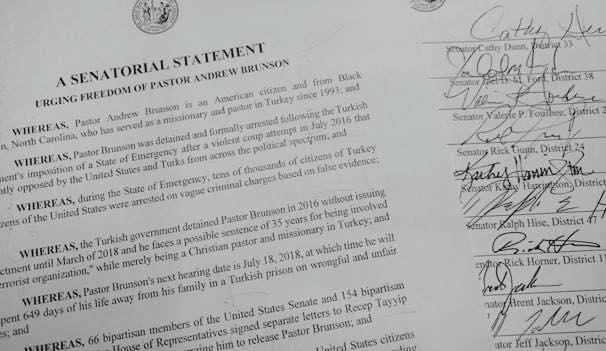 RALEIGH – Thursday, Forty-eight out of fifty members of the North Carolina Senate signed onto a Senatorial Statement urging the Turkish government to release Pastor Andrew Brunson. Brunson, a Presbyterian minister from Black Mountain, North Carolina, has been unjustly imprisoned in that country since October 7, 2016.

Pastor Brunson, a missionary who serves as a pastor to a small Christian church in Turkey, was wrongly arrested and associated with a group that Turkish authorities say was responsible for a coup attempt against President Tayyip Erdogan. Brunson denies all the charges against him, saying at trial, “I’ve never done anything against Turkey. I love Turkey. I’ve been praying for Turkey for 25 years. I want the truth to come out.”

The accusations against Pastor Brunson are solely based on three secret witness accounts.

The U.S. Department of State says there is “no credible evidence” to justly convict Brunson of any crime. The United States Commission on International Freedom “strongly condemns” the charges.

Rev. Mark Creech, executive director of the Christian Action League, lobbied Senate members to sign the document. In addition to speaking directly with most of them, he also sent an email to certain members explaining that Brunson is a victim of hostage diplomacy.

“Turkey wants a Muslim cleric in the United States that it claims played a role in the coup attempt,” wrote Creech. “In other words, extradite the Muslim cleric and we’ll give you back the Christian preacher.”

But Creech adds the case against Brunson is fundamentally about religious liberty in the world. “The accusation against him claims he is ‘dividing and separating [Turkey], by means of Christianization,’ and that his ministry is considered ‘an agent of unconventional warfare’ beneath the ‘mask of an evangelical church pastor.’ This is no different than when the Emperor Nero claimed Christians burned Rome,” said Creech.

Senators Chuck Edwards (R-Buncombe) and Terry Van Duyn (D-Buncombe), which both represent Buncombe County where Brunson and his family reside, presented the Senatorial Statement on the Senate floor.

Edwards told Senate members he was making a plea to “all North Carolinians, and to all this Senatorial statement may ultimately reach – to pray for the family of Pastor Brunson – and to reach out to comfort them by whatever means possible.”

“I can only imagine the fear, the anxiety, and the sorrow they must now be experiencing given the current uncertainty of their beloved. Let us please work to let them know that they are not alone,” Edwards added.

The North Carolina House unanimously approved a resolution on June 12th asking that Brunson “be released from prison immediately.” The Senatorial Statement is nearly identical in its content.

Current Senate Rules do not allow for resolutions, but only Senatorial Statements.

Senators Van Duyn (D-Buncombe), Don Davis (D-Pitt), and others spoke from the Senate floor in favor of the statement.

Remarks by Senator Paul Newton (R-Cabarrus) were perhaps the most eloquent. Newton read from I Corinthians 12:26, which says, “If one part suffers, every part suffers with it; if one part is honored, every part rejoices with it.”

“Far too often, the right, we as American have, to practice and express our religious beliefs, openly and freely, is taken for granted. Pastor Brunson’s imprisonment is a harrowing example of the religious persecution that continues to persist around the world.

“Pastor Brunson is languishing in a prison cell meant to hold 8 people, but currently holding 28. Kristina Arriaga, vice chairwoman of the U.S. Commission on International Religious Freedom says that he can never leave his cell, ever, not to eat, not to go to the restroom, not to get some fresh air. She adds, ‘It is so incredibly unjust for this man – whose only crime is to believe in God and tell other people about it…

“Pastor Brunson himself has written, ‘Let it be clear, I am in prison, not for anything that I have done wrong, but because of who I am – a Christian pastor. I desperately miss my wife and children. (His wife is Norine and they have three children). Yet, I believe this to be true – it is an honor to suffer for Jesus Christ as many have before me. My deepest thanks to all those around the world who are standing with me and praying for me.’

“It is now our duty to act on this man’s behalf. The Book of Proverbs, chapter 31, verses 8-9 call on us to ‘Speak up for those who cannot speak for themselves; ensure justice for those being crushed. Yes, speak up for the poor and helpless and see that they get justice.’

“We cannot simply standby waiting for this man to be freed. In addition to prayer, we must, with all the authority we have been given, condemn the actions of the Turkish government and implore that Pastor Andrew Brunson be set free. I further request that this senatorial statement be spread upon the journal.”

Creech said that he was thankful to members of the North Carolina Senate for the senatorial statement.

“It’s impossible to really know how much good a House resolution and a senatorial statement will do if it will have any significant effect on securing Brunson’s release,” said Creech. “But we have to try. These are official declarations from North Carolina state governing bodies insisting that an innocent North Carolinian be releases. Who knows in what way God may use them to set our Christian brother free.”

Creech also said he hoped that if Brunson’s release is not resolved that North Carolina will consider stronger words and take action.

“I think absent Brunson’s release, state lawmakers ought to urge the state Treasurer to review our state government’s economic relationship with and investments in Turkey and make such recommendations as may be appropriate to the circumstances,” he said.