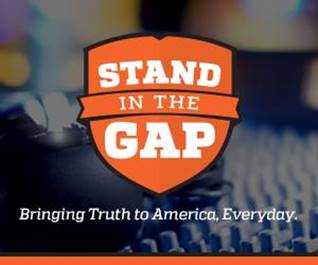 Gun ownership = idolatry. That’s the message of a North Carolina Council of Churches billboard near Mebane and the assertion debunked by the Rev. Mark Creech on a nationwide radio show this week.

“On Monday, I was glad to welcome to our daily ‘Stand In The Gap Today’ radio program Dr. Mark Creech, executive director of the Christian Action League. Mark is a great apologist and articulate spokesman for the truth.” said Dave Kistler, show host and president of the North Carolina Pastors Network.

“His comments on Monday’s program went right to the heart of why both he and I vehemently disagree with the billboard recently posted by the North Carolina Council of Churches, implying that all gun owners are idolators.”

Creech told Kistler and the show’s listeners that the I-85/I-40 billboard, which features a pile of guns on a bed of bullets and references the Second Commandment, immediately disturbed him because of its misuse of scripture.

“The billboard seeks to impose a false sense of guilt,” Creech said. “While it accuses people who believe in the Second Amendment of breaking the Second Commandment, I’m convinced the authors of the billboard are in violation of the Third Commandment: Thou shalt not take the name of the Lord thy God in vain.”

He said part of that admonition requires that we not attribute something to God that He hasn’t said.

“We can no more prevent a bad person from getting a gun than we can prevent a bad clergymen from misusing Scripture,” Creech quipped, asking if we should therefore consider laws that would prevent those who twist God’s words from owning a Bible.

Creech told Kistler he was not surprised that the NC Council of Churches, a left-leaning ecumenical organization involving 6,200 congregations from 18 denominations, was not adhering to a Biblical worldview.

“They were opposed to the Marriage Amendement and were opponents of HB 2,” he said. “Everything from the size and role of government to immigration, they get it wrong.”

To show the billboard’s theological and ideological shortcomings, Kistler cited Creech’s recent article on the CAL website, including statistics showing that cities and states with some of the most restrictive gun laws also have some of the highest crime rates:

When asked why he thought the NC Council of Churches was pushing the gun control message, Creech said it could be that they believe their pacifistic approach is more “Christian” or that guns are best left only in the hands of those in authority, such as law enforcement.

“I think it may also be true that there could be some nefarious forces at work in some of these churches,” he added, citing the growth of Marxist ideology in America.

While Creech was clear that he could not judge a person’s motives, he was adamant that it would be dangerous and ill-advised to trust claims by Council of Churches Executive Director Jennifer Copeland that the organization does not want to repeal the Second Amendment.

As for the theological defense of gun ownership, Creech pointed out that after the first murder, when Cain killed Abel with a rock, God did not command that rocks be banned. In Nehemiah, because of their need for self-defense, God’s people rebuilt the wall around Jerusalem with a sword in one hand and a trowel in the other. And Jesus, in Luke 22, tells his disciples, if they are unarmed, to sell their cloaks to buy swords.

“Another argument is that we do good, we are virtuous when we oppose a violent, unjust attack, and are derelict in our duty to God when we don’t do that,” Creech said. He reminded listeners that even when Peter used his sword impetuously in the Garden of Gethsemane, Jesus simply told him to put it back in its sheath, not that he should relinquish it.

Kistler added his own biblical example of the honorable —and in no way idolatrous — use of weapons, citing David’s use of a sling and a sword to kill Goliath.

“David’s confidence was in the Lord, but he used the implements,” Kistler said.

“Scripture puts the responsibility on us because of our love of other people … we ought to attempt to save the life of others when the time comes,” he said. Rohrer cited Paul’s writing in 1 Timothy 5, regarding those who do not provide for their families.

“If I don’t protect my family. If I don’t stand up and use whatever I have to do so, I will be considered a denier of the faith,” he said.

In closing, Rev. Creech made it clear to listeners that guns, just like anything, can be an idol.

“For instance, if in this country we continue to defy God and believe our military can protect us and that we don’t need God, that is idolatry,” he said. “But it is not an either/or argument. Using a gun can also be an act of obedience.”

Gary Dull, executive director of the Pennsylvania Pastors Network, also commented on the broadcast, urging listeners to diligently seek God’s will on the issue by reading His word for themselves.

“Stand In The Gap Today” airs on more than 425 stations nationwide and is heard by approximately 3 million to 5 million listeners daily.