You are here: Home / Christian Action League / Could the Mention of ‘God’ in Court Cause a Mistrial 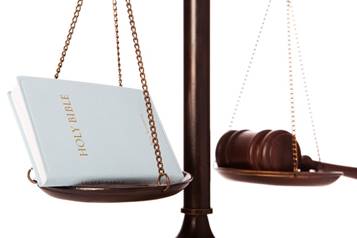 Could the mere mention of “God” in an American courtroom serve as the basis of a mistrial? A case that recently came before the North Carolina Court of Appeals raises the question.

As I was reviewing a long list of legal rulings filed by the Court of Appeals yesterday afternoon, I came across an opinion issued in a driving while impaired (DWI) case, State v. Calabrese. A notation in the description of the case mentioned “references to religion,” so I thought I would take a look.

Without going into too much detail, the case appears to deal with a fairly standard DWI conviction. What caught my eye, however, was an attempt by the defense attorney to compel the trial court to declare a mistrial in the case, in large part, because the prosecuting attorney mentioned the word “God” in his closing arguments.

According to the opinion, here’s a synopsis of what the prosecuting attorney said:

“Thank God laws like this help stop the drunks like our defendant to stay off our roads. Thank God we have laws in place to help keep these kinds of people off the roads and to keep our families safe. God help those who drive on a highway after the defendant is out there after having something to drink. It is the jury’s duty to find the defendant guilty to prevent such things from happening again.”

The mentions of “God” in this context are so broad and culturally commonplace that they were more likely used as emphasis rather than an attempt to appeal to the jury’s religious sentiment.

In fact, the Court of Appeals acknowledged the following in its opinion:

“The Supreme Court of North Carolina has cautioned against the use of arguments based upon religion and has ‘in the past disapproved of prosecutorial arguments that made improper use of religious sentiment.’ However, the Supreme Court concluded an argument, which does not ‘contain . . . extensive references to religion[,]’ and is more appropriately characterized ‘as a request that the jury fulfill its duty to render a verdict in accordance with the dictates of justice and [is] not a direct appeal by the prosecutor to take religion into account[,]’ is not improper. In this case, the prosecutor’s references to God included the phrases ‘Thank God’ and ‘God help those . . . .’ Such appeals are unlikely to ‘pose a danger of distracting the jury from its sole and exclusive duty of applying secular law.’ As the State argues, such appeals and phrases are common idioms in standard usage. Moreover, four references to ‘God’ do not rise to the level of ‘extensive references to religion.’”

Whether for judicial expediency, which was likely the intent in this case, or for a more diabolical purpose, some individuals seem bent on removing God—and any reference to God—from the American justice system.

Fortunately, in this case, the trial court and the North Carolina Court of Appeals denied the call for a mistrial. The case does, however, demonstrate how severely limited the courtroom is when it comes to making “references to religion” or seeking truth from a higher authority.

How sad and ironic that a system designed to seek “justice” would so readily turn a blind eye to the only One who can render true justice. As the psalmist says of God in Psalm 89:14, “Righteousness and justice are the foundation of your throne; love and faithfulness go before you.”

This article was posted with permission from the author of the NC Family Policy Council.