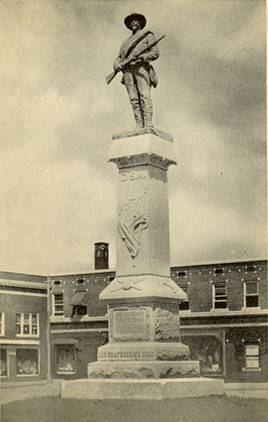 RALEIGH-DURHAM – The saga for removing Confederate Memorials in North Carolina continues with new leftist actions meant to ramp up the pressure.

In 2015, The North Carolina General Assembly passed a measure that then Governor Pat McCrory signed. Senate Bill 22 stated, “a monument, memorial, or work of art owned by the State may not be removed, relocated, or altered in any way without the approval of the North Carolina Historical Commission.”

Recently Governor Cooper called for the removal of all Confederate monuments and for lawmakers to repeal SB 22. He contended such monuments would be better in museums and historical sites.

The Cooper administration in its petition to the State Historical Commission contends removal of the three Confederate Memorials from the Capitol grounds to Bentonville Battlefield would meet the current law’s criteria.

The three Confederate Memorials on the Capitol grounds include:

The Henry Lawson Wyatt Memorial – Wyatt was the first Confederate soldier killed in action from the Tar Heel state during the Civil War.

The 1895 Confederate Soldiers Monument – Unveiled in May of 1895, this memorial commemorates the North Carolinians who gave their lives in the War Between the States. It is the oldest of the monuments, having been on the Capitol grounds for more than 122 years.

Tuesday of this week, American Lens reported that communists gathered in Durham “to announce a ‘national movement’ to criminally remove Confederate monuments and statues they find offensive. The collection of activists included Antifa, Black Lives Matter, communists, anarchists, and socialists. The event’s theme was ‘do it like Durham’ and consisted of encouraging other cities to tear down statues and destroy public property.”

American Lens revealed the event invitation was posted on Facebook by the group calling themselves, ‘Defend Durham.’ It hailed those who lawlessly toppled the Confederate statue that once stood on the grounds of the old Courthouse in Durham, and promised more of the same.

“We will also honor the resistance in Charlottesville, VA on the one month anniversary of the murder of Heather Heyer, and the struggle across the South to tear down the vestiges of the Confederacy and white supremacy – from monuments, to the school to prison pipeline, police brutality, the prison industrial complex, and more,” the invitation reportedly said.

Wednesday, a New York Law Firm, Boies, Schiller & Flexner, threatened to sue the University of North Carolina at Chapel Hill if the University did not remove from its campus ground the Civil War statue widely known as Silent Sam.

ABC 11 reported that Hampton Dellinger, an attorney for the law firm, is representing 12 UNC students, a professor, and the Black Law Students Association.

In a letter to the University, Dellinger claimed “the statue violates federal anti-discrimination laws by fostering a racially hostile learning environment.”

Dellinger’s letter further echoed the claims that Silent Sam is a “method of white supremacists intimidation” and a celebration of racism.

Dr. Mark Creech, executive director of the Christian Action League, said he sees the removal of Confederate Memorials as a matter of concern and is skeptical of the movement’s real motives.

“I fly no Confederate flag at my house, nor would I do so. As a Christ-follower, I feel no compulsion to zealously defend a Confederate Memorial, even though I would prefer to see them stay. Furthermore, I have spent my 38 years of ministry repudiating racism. But it’s the motives behind the removal of these monuments that are of great concern to me,” said Dr. Creech.

Dr. Creech contended, “Governor Cooper, during his entire political career has never given a flip about these monuments, not mouthing the first objection, until he saw a political opportunity to capitalize on the energy and resources of the far left. I suggest this is the new HB 2. You can count on Cooper and his ilk to use this issue to make every lawmaker that doesn’t support repealing SB 22 look like a racist or bigot.”

“Moreover, it is the caliber of people leading this campaign which concerns me the most. Antifa is an organization that claims to be antifascist, yet it acts as fascists do. There are those in this movement who embrace communism and socialism, a system of government that is the enemy of freedom and the author of untold death and mayhem. The movement’s associations include people that advocate for lawlessness and anarchy. I feel quite certain it’s not just statues that these activists want to replace; it’s a government that preserves the virtues of liberty and free speech. This is what tyrants do. This is what terrorists do. Today it’s Robert E. Lee, Stonewall Jackson, tomorrow it’s Washington, Jefferson, and ultimately the Constitution. The people out front in this campaign are sons of Belial, those who would induce us to forsake our heritage and come away with them to worship the god of state – a god who promises full equality but would only make us equally impoverished,” Dr. Creech further added.

No one has yet to suggest what should replace the removed Confederate Memorials.