You are here: Home / Christian Action League / Churches and Nonprofits Must Now Pay Taxes. This is Not a False Alarm 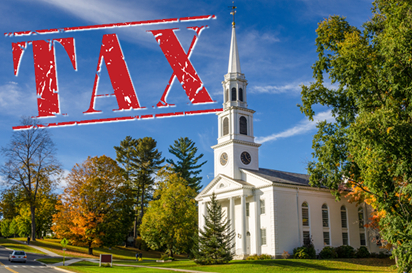 Last year ended with a flurry of news analyses regarding the nation’s first major tax overhaul since 1986. As most Americans struggled to figure out how the new rules would affect their personal finances, few realized the legislation would strike a blow against churches and other nonprofits, causing many of the organizations to deal with taxes for the first time in history.

The obscure provision tucked deep within a massive budget bill requires nonprofit organizations to pay a 21-percent tax on some benefits they provide their employees, such as parking, transportation and other perks. Analysts now say the tax could cost nonprofits millions of dollars if not more.

“There are nearly 15 million employees that work in the United States for nonprofits – nearly 10 percent of the workforce – so that’s 15 million parking places,” explained Dan Busby, president of the Evangelical Council for Financial Accountability (ECFA). “And conservatively, it’s going to cost the non-profit community as a whole up to a billion dollars.”

According to a national organization called Independent Sector, the United States is home to nearly 1.6 million tax-exempt organizations including roughly 40,000 in North Carolina that employ at least 400,000 people.

How much each of those organizations will have to pay for providing employee parking spaces is still unclear. Some lawmakers in Washington contend that the provision applies only to parking benefits that the church or other nonprofits must purchase. Examples would include parking privileges in urban parking decks or transit passes provided to workers to offset commuting costs. But ECFA experts and other analysts say that, according to the law’s verbiage, a nonprofit that simply allows its employees to park in a parking lot or garage that is part of the organization’s facilities would be subject to a tax on the cost of that parking.

Because of the new tax that took effect Jan. 1, many formerly tax‐exempt employers, including churches, hospitals, charities and schools will be forced to file federal Form 990‐T, and in some cases, they will also have to file state corporate income returns.

Beyond the costs incurred, the Rev. Mark Creech, executive director of the Christian Action League, says he is greatly concerned about the precedent being set by the new law.

“If the government is allowed to tax nonprofits, including churches, for such matters, it is inevitable that further attempts will be made to tax churches altogether just like businesses and other entities,” Creech said. “Every church ought to be deeply concerned and expressing to Congress that this provision in the law must be repealed.”

House Ways and Means Committee Chairman Kevin Brady told the media that he supported the provision because it creates “greater parity” between for-profit and nonprofit organizations. But ECFA Chairman Michael Batts questions Brady’s logic and his understanding of why nonprofits have been granted exempt status in the first place.

“The whole idea of tax exemption for nonprofit organizations that are doing charitable, religious, and educational work is for them not to be on the same playing field as for-profit businesses when it comes to taxes, in order to incentivize the good work they do to make our society better,” Batts said.

Rep. Michael Conway (R-Texas) introduced legislation to kill the tax in June. And the ECFA has had more than 2,600 churches and other nonprofit organizations to sign a Position Statement opposing the tax. Approximately 100 of those signers are from North Carolina.

Rev. Creech urged church administrators, nonprofit leaders and others to sign onto the ECFA petition opposing the tax.