You are here: Home / Christian Action League / Billy Graham Spoke to America, Its Social Issues and Told Us How to be Free 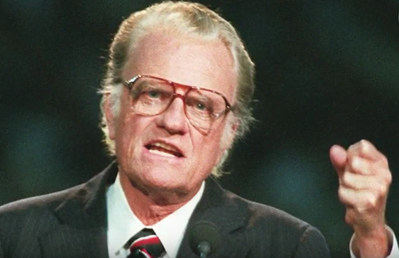 Among the dozens of things written about Billy Graham, after his passing earlier this week, was something I found on the Freedom from Religion Foundation (FFRF) website.

In a statement about the world-renowned evangelist’s death, FFRF noted a time when Christopher Hitchens, who has been hailed as an antitheist, was once asked if he believed Billy Graham was an evil man. Hitchens replied, “Yes, disgustingly evil man.”

The article then went on to argue that Graham worked to destroy America’s secular government.

“Graham helped corrupt America’s secular foundations by riding the wave of religious fervor in the 1950s, which brought with it ‘under God’ into the Pledge of Allegiance, the Capitol prayer room, and ‘In God We Trust’ as a national motto,” said FFRF. “Graham leaves behind a legacy that has severely damaged our Constitution and the wall of separation between state and church. FFRF will continue to work to undo this legacy.”

Interestingly, opinions about Graham and his impact on politics vary. Groups on the far Left, like FFRF, think that he was too involved. Many argue that he was neutral. While others claim he should have done more.

One thing is for certain, however, Billy Graham had a lot to say about America and its many social issues. Moreover, he told Americans how to be free and to stay free. Here are some powerful remarks he made:

“America has probably been the most successful experiment in history. The American Dream was a glorious attempt. It was built on a religious foundation. Its earliest concepts came from Holy Scripture.”

“You can put a public school and university in the middle of every block of every city in America – but you will never keep America from rotting morally by mere intellectual education.”

“I believe America has gone a long way down the wrong road. If we ever needed God’s help, it is now.”

“God honored and blessed America as few nations in history. However, in recent years the nation has been moving away from its religious heritage.”

“A terrifying spiritual and moral tide of evil has already loosed us from our spiritual moorings. Monstrous new ideas that could easily destroy our freedoms are rushing into the vacuum.”

“Spiritually, we have wandered far from the faith of our fathers…no nation that relegates the Bible to the background, which disregards the love of God and flouts the claims of the Man of Galilee, can long survive.”

“Our government is certainly going to fall like a rope of sand if unsupported by the moral fabric of God’s Word. The moral structure in our country grew from Judeo-Christian roots. When those values are applied, they produce moral fruits. But if that structure disappears, the moral sentiment that shape’s our nation’s goals will disappear with it.”

Graham also spoke out prophetically about the social issues of our day.

Regarding the issue of race, Graham said:

In Christ, the middle wall of partition has been broken down. There is no Jew, no Gentile – no black, white, yellow, or red. We could be one great brotherhood in Jesus Christ. However, until we come to recognize Him as the Prince of Peace and receive His love in our hearts, the racial tensions will increase, racial demands will become more militant, and a great deal of blood will be shed. The race problem could become another flame out of control!”

“Only God can break down the national and racial barriers that divide men today. Only God can supply that love that we must have for our fellow man. We will never build the brotherhood of man upon earth until we are believers in Jesus Christ.”

Regarding the issue of abortion, Graham said:

“The Bible does not support the indiscriminate practice of abortion. Many of the great characters of the Bible, such as Jeremiah or John the Baptist, were chosen by God before they were born. Many people feel that an exception might be made in the case of incest, rape or when the mother’s life is in danger. I think in these instances the decisions must be based on individual cases and the serious moral and spiritual implications must be carefully considered. For example, some of the greatest people whom I have ever met were born as a result of rape. I am thinking, for example, of Ethel Waters, who did more than almost any person to pave the way in Hollywood and New York for black people to be in show business. She was the queen of black stars. Later, when she gave her life wholly to Christ, she joined our team. Ethel stayed with us for many years and was loved by people all over the world. Suppose her thirteen-year-old mother, who had been raped, had chosen abortion? The world would have never known Ethel Waters. And I could name many like her.”

Regarding the issue of religious freedom, Graham said:

“The framers of our Constitution meant that we were to have freedom of religion, not freedom from religion.”

Regarding the issue of same-sex marriage, Graham took out full-page ads in the larger daily papers in North Carolina supporting a state constitutional amendment that would define marriage as one man and one woman, which read:

It could be argued that Graham spoke to the issue of transgenderism when he said:

“Ancient historians tell us that one of the symptoms of a declining civilization is a desexualization of the human race, with men becoming more effeminate and women becoming more masculine, not only in physical [appearance] but in their basic characters.

Regarding the issue of gambling, Graham said:

“It is the sin of avarice which causes gamblers to have fever in their blood and drives them on, recklessly hardening their hearts until they have lost not only their money but their souls.

Regarding the issue of alcohol, Graham said:

“Liquor is not necessary either for health or for so-called gracious living…It is the cause of untold sorrow, suffering, and material loss, not to mention the spiritual implications of drinking.”

It could rightly be contended that Graham spoke to the current opioid crisis, although not directly. Graham once said:

“Volumes could be written on the problem of [drug] addiction. Millions of barbiturates are swallowed every night to help the nation sleep. Millions of tranquilizers keep us calm during the day; Millions of pep pills wake us up in the morning. The Bible warns that these flights from reality bring no lasting satisfaction.”

Graham obviously understood something that FFRF and much of the nation still doesn’t understand today: Our freedom is bound up in our relationship to the Creator.

We were made by God in His image. Unlike any other part of the creation, we possess superior intellectual, moral, and spiritual faculties. Most importantly, mankind has been given a will to make or mar his destiny, to climb in life or to sink to the depths.

Graham repeatedly reminded us that liberty and its maintenance is a profound spiritual matter. It is deeply rooted in divine sonship, and the image of God in man is defaced whenever our relationship to God is forgotten and we see ourselves only as children of this earth.

Graham said it over and again, if we would live free both personally and corporately, we must repent of our sins, receive Christ as Savior, and embrace His Lordship.

Such is not evil. It’s the opposite contention that’s “disgustingly evil.” We have seen it played out thousands of times throughout history in murder and mayhem.

Whenever we choose something other than what a loving God intended, in comes the strong man, in comes the despot, whether literally or figuratively, to fill the vacuum and bind us to misery.