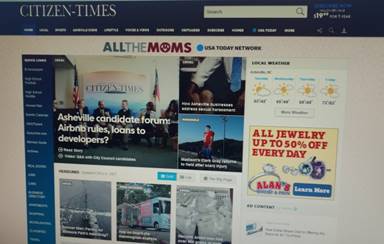 It seemed like a simple request: “Please be fair and let the readers decide.” But the editors of one of North Carolina’s major daily newspapers instead practiced media bias, censorship and discrimination by allowing a columnist to label Bible-believers as “bigots,” while refusing to print an opposing viewpoint without inserting subjective language to undermine its arguments.

“The Asheville Citizen-Times has essentially said, ‘We will let you make your claims but only if you allow us to censor your remarks accordingly,’” said the Rev. Mark Creech, executive director of the Christian Action League, after exchanging close to a dozen e-mails with editors over a proposed guest column he had submitted.

The ordeal began on Oct. 17, when weekly advice columnist N. John Shore Jr. called people who believe that homosexuality is a sin “bigots.”

Seeing how the roughly 600-word piece defamed Christians, Dr. Creech asked the newspaper management if he could respond with an op-ed piece of the same length. He pointed out that Shore’s column, which included a veiled association between people who hold a Biblical view of homosexuality and groups like the KKK, unjustly disparaged a large portion of readers, and he promised to use kinder words than the columnist had employed.

By Oct. 27, the newspaper’s opinions editor Casey Blake had reviewed Dr. Creech’s column, available here, and scheduled it for publication the following Saturday, but not before inserting qualifiers such as “I believe” and “we believe” prior to at least four of the document’s core statements and thereby weakening its arguments.

When, in the column, Creech referenced North Carolina’s approval of a constitutional marriage amendment saying that voters did not act out of bigotry, “but because thousands of years of evidence shows that heterosexual relationships of one man and one woman committed to marriage for life is superior in providing society with the most benefits,” the editor once again added the “we believe” qualifier.

When Creech asked why, he was told via email that “There simply is no science to suggest that opposite-sex marriages are ‘better for society’ than same-sex marriages.”

“Quite the contrary, the evidence is voluminous,” Creech said, challenging the publication to apply the same standard to its own columnist and therefore provide “the scientific and empirical evidence that conservative Christians who believe same sex marriage is wrong are bigots.”

“Shore’s argument was entirely subjective, but treated as factual,” Creech said, once again asking the newspaper to publish his piece without the weakening statements so as to allow the reader to determine, on his own, the merit of the argument.

“N. John Shore’s argument that conservative Catholics, Baptists, Presbyterians, Methodists, Wesleyans, Pentecostals, etc. as well as others who voted for the marriage amendment and believe that same-sex marriage is wrong are bigots was quite demonstrative,” Creech said. “He didn’t qualify his remarks with ‘I believe,’ and obviously no one required that he qualify his contentions with, “I believe.”

When the newspaper refused to publish the column without adding the qualifiers, he asked that it not go into the newspaper at all and be pulled from the website, which the Citizen-Times did.

Creech said some people may dismiss the issue with a shrug or question why the small qualifying clause “I believe,” even matters.

“This may be ‘par for the course’ in these days of flagrant media bias, but that doesn’t make it right,” Creech said. “May God hasten the day for a return to true journalism and newspapers that diligently seek the truth. Our liberty depends on it.”