You are here: Home / Christian Action League / What Would You Say to Someone on the Ledge? 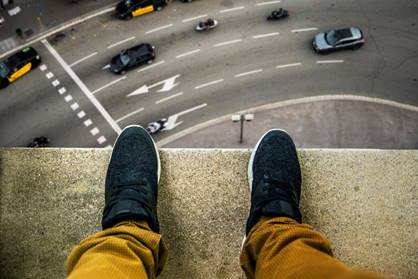 Suicide has certainly been in the headlines lately. First was the death of American fashion designer and businesswoman, Kate Spade. Quickly on the heels of her death came that of Anthony Bourdain, the celebrity chef, author and travel documentarian, who took his own life.

Last Sunday, I pulled into the parking lot of a church where I was scheduled to speak. As I got out of the car, I noticed two men relaxing on the tailgate of a pick-up truck. I went over to greet them and realized when I got closer that one of them had tears in his eyes. The other fellow was trying to comfort him. The man crying had just learned in his Sunday School class that a good friend had committed suicide. The heartbreak was especially intense for him because his brother had also committed suicide two years earlier.

I was in shock to learn this week that suicide rates in London, England, are up by 107% – more than 4 times the national rate.

Suicide rates are up in America too – way up!

Writing for the North Carolina Policy Council, Julie Tisdale noted on June 8th the Center for Disease Control (CDC) reported that in 2016 45,000 Americans took their own lives. Suicide has risen by 30% from 1999 to 2016. In at least 25 states the increase was more than 30%, and in every state there was a rise, except for Nevada, which was already high.

Tisdale speculated that loneliness could be a driving factor in the rise of suicide. She cited a Cigna and Ipsos study published in May, which surveyed 20,000 American adults concerning loneliness. She writes, “They found that: 27 percent rarely or never feel that there are people who understand them; 24 percent rarely or never feel they can find companionship when they want it, and 19 percent don’t feel there are people they can turn to.”

Mother Teresa, who emptied her life in helping the poorest of the world’s poor in Calcutta, India, once said, “Loneliness and the feeling of being unwanted is the most terrible poverty.” She said something on another occasion, I think, that speaks to the upsurge of suicide in America and other Western nations. She claimed, “The spiritual poverty of the Western world is much greater than the physical poverty of our people. You in the West have millions of people who suffer such terrible loneliness and emptiness.”

I once read a news story about a young secretary in London who climbed onto a window ledge of a high rise building. Fear was written across her face as she threatened to jump to her death. A man was able to lean from the window and carry on a conversation with her. She sobbed about her life as she shared her feelings of hopelessness. The man spoke gently as he tried to convince her that life was worthwhile and she should come away from the ledge. He pleaded with her for at least an hour, but to no avail. She leaped from the building anyway.

Suppose you were in the same situation as that man. For one hour you would have the opportunity to share from your heart and out of your own experience the reason life is worth living and should never be aborted by suicide. What would you say?

There are no quick, easy answers for every situation. Still, I think there are some helpful things that could be shared with someone in this state of mind.

One of which is that life can be exceedingly difficult, but it doesn’t have to defeat us. Life is always of inestimable value!

Put your hand on your chest and feel the beating of your heart. That’s life and it’s a miracle in itself. It’s a sacred gift from God. No matter what the circumstances, you can trust God to take your life and mold it into something meaningful, purposeful, and impart it with his peace.

Christ can fill the emptiness and his constant presence takes away the loneliness. God is near, even though you may not realize it. He understands you and your situation better than anyone. He will meet you at the point of faith if you will turn to him.

Furthermore, one message to be gleaned from the Cross of Christ is that no matter how discouraging the scene, God can turn tragedy into triumph. Was there anything more dreadful, more unjust, than the killing of the Son of God? Yet God, the mighty alchemist, turned it into gold. He turned it into our soul redemption and exalted Christ at the right hand of his throne.

Many times our extremities are opportunities for us to know God and experience his grace in ways impossible otherwise. You’ve heard the principle stated before, “No pain, no gain.” God specializes in making something out of nothing. His Word in the Bible, his promises, are always true. They provide hope and light to navigate the darkness.

Second, whatever your failures or achievements, the connections you have with the people you love are much more important. Suicide is an intense self-preoccupation that blurs one’s vision of their parents, siblings, spouse, children, and friends. There is nothing one could do to exact more pain on them than a self-inflicted murder.

Lastly, suicide is never God’s will. And though God deeply loves us, it’s a terrible sin. What could possibly be more presumptuous than for a person to enter the literal and eternal presence of Almighty God without an invitation?

This is what I think I might say to the person on the window’s ledge.