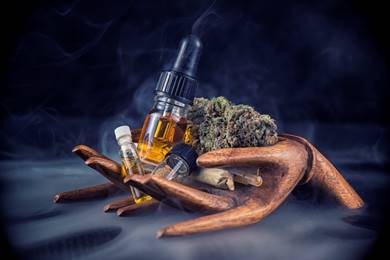 Within the last twelve weeks, there has been a significant spike in the number of users who have ended up in emergency rooms suffering from serious symptoms such as hallucinations, seizures, altered mental state, rapid heartbeat, and loss of consciousness.

State Health Director, Betsey Tilson, reported that the number had doubled from anything DHHS had seen in the past, with more than 30 cases being investigated by DHHS and the Carolina Poison Center. That number doesn’t include the uptick which has also been seen at military bases like Fort Bragg and Camp Lejeune.

Tilson said, “CBD Oil is supposed to be less than .3 percent of THC and therefore not having the psychoactive effects. It is technically illegal from a federal standpoint, and, in North Carolina, in general, it is not legal, but it’s not really enforced.”

CBD oils are derived from hemp plants and used in various ways.  A recent news story in the Asheville Citizen-Times reported on the way CBD oils are cropping up in Asheville businesses as lattes and teas. They are sometimes mixed with foods and even beauty products. Vaping is also a very popular method of use.

The allure for many is its calming effect. One user in the Asheville Citizen-Times report claims, “I like to say CBD makes you feel like you’re lying in a Lazy Boy: totally comfortable, but totally focused and completely mentally available.” Another proponent says, “As anxious as a lot of Americans are right now, this is the medicine to help them.”

Dr. Mark Creech, executive director of the Christian Action League, said the news of CBD oil use and the warning issued by DHHS took him by surprise. “Quite frankly, I didn’t realize the use of CBD oil was legal in the state. I knew that legislation had passed in 2014 allowing CBD oil as a treatment for children suffering from serious, even life-threatening issues with seizures, but that legislation was crafted very narrowly. I had no idea it could be legally sold in lattes or vaped in a vaping device.”

The state legislation that passed in 2014 was HB 1220 – Hope for Haley and Friends, which created a CBD oil compassionate use registry for those with intractable seizure disorders like Haley Ward of Newport, North Carolina. The law protects patients and caregivers from drug charges related to the product. It also offers immunity to neurologists who oversee the use of the extract for their patients and requires them to meet a number of strict criteria.

Dr. Creech said he didn’t believe “Hope for Haley and Friends,” had anything to do with the current problem of CBD oil use in North Carolina.

But He contends, “The US Farm Act of 2014 did allow for CBD oil to be sold in various forms as long as it didn’t have a THC concentration level greater than .3 percent. Such products would be devoid of any psychoactive effect. The North Carolina legislation allowed children with seizure disorders to use CBD oil in a concentration of up to .9 percent. You could drink the whole bottle at once and not get high with it at the .3% or even the .9 percent levels. Still, the problem is that the U.S. Farm Act allows CBD to be sold in every state at the .3 percent level, but the production and sale of it is unregulated. Apparently, there are those who are either providing CBD oils under the radar with higher THC levels than allowed, or they’ve contaminated the product with other substances. It’s the contamination that is putting so many people in the Emergency Rooms, and most likely the reason for the arrests in Tennessee.”

Tilson warns that people using a product labeled as CBD oil could be getting more than they bargained for.

“Although there have been no reports of deaths from CBD oils that have been contaminated,” said Dr. Creech, “the use of CBD oils should still be a matter of grave concern, because in an industry with no regulation as this one, you could get a substance that could permanently impair or kill you.”

The Christian Action League believes the sale of CBD oil in North Carolina needs greater regulation to protect the public’s health. “Perhaps state legislation that requires the industry to prove its purity before being sold in North Carolina might be in order,” said Dr. Creech.