There is a great story that I heard many years ago which I believe speaks quite profoundly to parents.

Brooks Adams from his earliest days as a child kept a diary.  On one very special day while still the tender age of eight, Adams recorded in his journal, “Went fishing with my father; the most glorious day of my life.” Adams never forgot that day. He referenced it repeatedly in his writings for the next forty years. He said it had a powerful influence on his entire life.

Interestingly, Brooks’ father was a very important man; Charles Francis Adams, United States Ambassador to Great Britain during the Lincoln administration. He too made reference to the fishing trip in his own diary. It reads, “Went fishing with my son; a day wasted.”

I suppose some might see the story as showing the need for spending quality time with one’s children. Certainly, that’s one legitimate application. However, I see it more as an illustration of the manner in which we have influence over our children’s lives by completely insensible means.

We typically think of the extraordinary to be more influential in life than the ordinary. Yet I suggest it is in the insignificant events – the ones where we are the least aware – that display our true characters and make their mark on others around us.

W.H. Griffith Thomas, the marvelous Anglican cleric and scholar of the late 19th and early 20th Centuries, has beautifully written:

“It is comparatively easy to shine on great occasions when we are conscious of the eyes of others are upon us; it is not by any means so easy to shine when we are free from the constraint of other people, when we are alone in our room doing the duty of the moment with equal need of faithfulness to God. Still more, we are being tested most thoroughly by those around us in our ordinary life when we are absolutely unconscious of anything of the kind.”

Horace Bushnell, a renowned Congregational minister and theologian of the 19th Century, who also taught at Yale, wrote insightfully on this same principle in a sermon titled, Unconscious Influence.

Bushnell said there are two sorts of influence, “active or voluntary, and that which is unconscious.” He argued there was a need for “a more thorough appreciation of the influence which is insensibly exerted.”

He cited that in nature it is those things of which we least take note that hold the earth together. The lightning with its incredible “glares and thunders and blasts,” he said, “is a mere firefly spark” in comparison to the “vastly more potent agent” of gravity – something we never notice.

Natural light, said Bushnell, fills “the world unconsciously with its beams.” It may seem “a very tame and feeble instrument, because it is noiseless,” unlike the earthquake that shakes the earth. Natural light “would not wake an infant in its cradle. And yet it perpetually new creates the world, rescuing it each morning as a prey from night and chaos. [T]he insensible influences of good men,” adds Bushnell, are “much more potent” than their voluntary acts, “as the great silent powers of nature are of greater consequence than her little disturbances and tumults.”

How true! And perhaps this is never better illustrated than in the way unconscious influence molds our children.

“The child’s soul is purely receptive, and for a considerable period without choice or selection. A little further on, he begins voluntarily to copy everything he sees. And thus we have a whole generation of future men [and women] receiving from us their very beginnings, and the deepest impulses of their life and immortality; and when we are meaning them no good or evil, they are drawing from us molds of habit, which, if wrong, no heavenly discipline can wholly remove; or, if right, no bad associations utterly dissipate. It may be doubted whether, in all the active influence of our lives we do as much to shape the destiny of our fellow-men, as we do in this single article of unconscious influence over children.”

You’re the little fellow’s idol, you’re the
Wisest of the wise;
In his little mind about you no suspicions
Ever rise;
He believes in you devoutly, holds that
All you say and do
He will say and do in your way when
He’s grown up like you.

There’s a wide-eyed little fellow who
Believes you’re always right,
And his ears are always open and he
Watches day and night,
You are setting an example every day in
All you do,
For the little boy who’s waiting to grow
Up to be just like you.

I think it was humorist Josh Billings who wisely admonished, “Train up a child in the way he should go; and walk there yourself once in a while!” 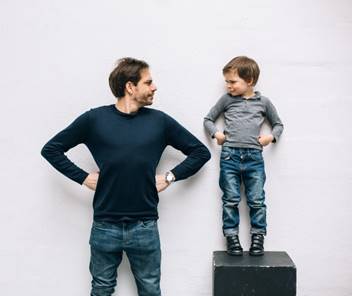 Of course, no parent is always morally consistent. What is more, as our children mature, I think they come to understand better our humanity – our brokenness. But even so, when we recognize that we’ve taken the wrong path before them, we should admit it. When we need to apologize for a poor example, we can show them something critical about sin, God’s grace, and forgiveness if we humble ourselves and take responsibility.

I’m convinced we don’t usually lose our children for the mistakes we make. We lose them more often for failing to admit our mistakes and seek their pardon.

It is not the lightening that has the most effect on our children, it is the light shed in everyday life and in ordinary occurrences.