You are here: Home / Christian Action League / Two Assaults on HB 2 at the Legislature This Week 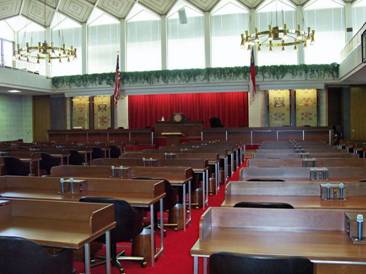 RALEIGH – “Concerned citizen Christians who believe HB 2 needs to stay on the books can’t afford to let their guard down or be uninformed about the continuous assaults on this common sense law,” said Dr. Mark Creech, executive director of the Christian Action League.

Creech was speaking in reference to the two assaults made on the “bathroom law” this week via the Governor’s State of the State speech, and a failed attempt to repeal the measure initiated on the House floor by Democrats.

Gov. Cooper gave his State of the State speech to a joint session of the NC House and Senate on Monday evening. At the very beginning of his remarks, the Governor said, “I’m going to say this first thing…I call on the legislature once again to repeal House Bill 2.”

The Governor added that if the General Assembly would pass a clean repeal of the measure, he would “sign it the same day.”

He said passing a repeal of HB 2 would bring back jobs, sports, and entertainment. “HB 2 is the dark cloud hanging over our state of promise,” he said. He called on legislators to pass a repeal by the end of the week.

But Dr. Creech said the Governor’s words were disingenuous. “I remind you that he supported the ordinance passed by the city of Charlotte that started this whole mess. Some suspect he actually colluded with the Mayor of Charlotte, as well as businesses, sports, and entertainment entities at the state’s expense for his own political gain. He’s got a lot of nerve calling upon the legislature to repeal it,” said Creech. “We don’t need to repeal HB 2. But even if we did consider repeal, a straight-up repeal would leave the state vulnerable to Charlotte and other cities doing the same thing all over again, and the compromise that was recently introduced isn’t really satisfactory for either side.”

Creech added HB 2 had not significantly injured North Carolina’s economy, citing its effect on the state’s GDP was less than one-tenth of one percent.

He also said in a Facebook post that for lawmakers to set aside social issues, as the Governor suggested, would be to neglect those matters that relate to the very heart and soul of North Carolina.

By Tuesday, Democrat House Minority Leader, Darren Jackson (D-Wake) proposed tacking on an amendment for the repeal of HB 2 to a measure related to the state Banking Commission. Rep. David Lewis (R-Harnett), who was presiding in the Speaker’s absence, ruled Jackson’s amendment was not germane to the bill.

Jackson appealed the ruling and Lewis gave Jackson the floor to make the case for why the Chair’s ruling was wrong and why he thought his amendment was germane.

During his speech Jackson just essentially railed against HB 2, saying that this was the week to either repeal HB 2 or to let it stand until after the next election – a veiled threat that failing to repeal the measure would result in Democrats regaining power.

Jackson said the NCAA, NBA, business groups, equality groups, tourism groups, wanted repeal, and he claimed the people of North Carolina wanted it too. “They know House Bill 2 should have never happened. Now they just want all of this to go away…The best fix for House Bill 2 has always been straight-up repeal,” he said.

But Rep. Jeff Collins (R-Nash) interrupted Jackson’s speech to rise for a point of order. When recognized by the Chair, Collins asked what arguments Jackson had made that actually related to the reason his amendment should be considered germane to the Banking Commission legislation.

Lewis then allowed Jackson to continue but encouraged him to make his case for the way his amendment was related to the measure under consideration.

Jackson argued that banks like Bank of America, as well as others, were calling for HB 2’s repeal.

Immediately after making those remarks, however, Jackson resumed his rapid-fire accusations against HB 2, to which, Rep. Bert Jones, (R-Rockingham) called for a point of order, saying Jackson’s criticisms of HB 2 still had nothing to do with the germaneness of his amendment.

Jackson doubled down saying, “I understand you don’t think this is germane, but I do!”

At that point, the Chair obviously decided to suffer Jackson’s belligerence, allowing him to continue despite the Chair’s instructions to speak to the relevance of his amendment.

No member of the House offered a counter argument to Jackson’s assertions, but when the vote was taken, his amendment miserably failed by a 74-44 margin.

“I am deeply appreciative for every lawmaker who has been resolute and not backed down to the intense pressure for repeal,” said Dr. Creech. “I trust Christian Action League supporters will pray earnestly that HB 2 will survive these unjust attacks. Prayer is the key to this fight,” he said. “I’m confident that this fight must be won for the sake of our children and children’s children – for the sake of our nation. God will part the sea as he did for Moses and the Israelites if we will but have faith and continue to do what’s right.”