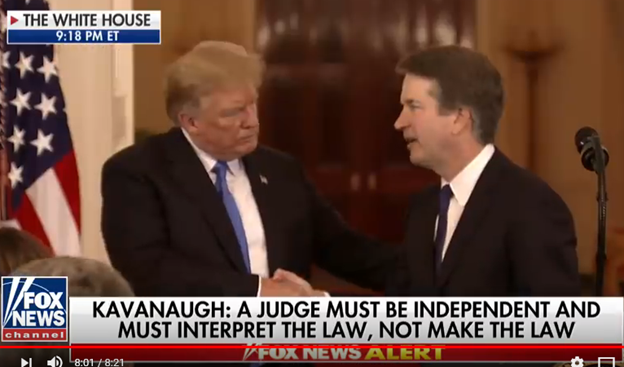 WASHINGTON, D.C. – Monday evening, President Donald J. Trump announced his pick to fill the seat on the U.S. Supreme Court vacated by retiring Justice Anthony Kennedy. President Trump chose Brett M. Kavanaugh, whom he touted as “a judge’s judge.” The President said that Kavanaugh has “impeccable credentials, unsurpassed qualifications and a proven commitment to equal justice under the law. There is no one in America more qualified for this position, and no one more deserving.”

After this, he served a one-year fellowship with U.S. Solicitor General, Kenneth Starr, followed by clerking for Justice Kennedy. After completing the clerkship with Kennedy, he joined the Office of Independent Counsel, under Starr, which investigated grounds for the impeachment of then-President Bill Clinton.

His legal experience also includes a partnership at the law firm of Kirkland and Ellis, where he worked on appellate advocacy. After George W. Bush was elected President, Kavanaugh served as White House counsel to President Bush, and later as his staff secretary.

In his acceptance speech, Kavanaugh described his judicial responsibility as one that “must be independent and must interpret the law, not make it.”

Various pro-life and religious liberty organizations have confirmed that they believe Kavanaugh, unlike other federal judges, would demonstrate judicial constraint and bind himself to the text and original meaning of the Constitution when considering cases.

On the national level, The Family Research Council, Focus on the Family, Liberty Council, National Right to Life, Susan B. Anthony List and Concerned Women of America have provided high praise for Kavanaugh as the President’s choice. The Ethics and Religious Liberty Commission of the Southern Baptist Convention sponsored a document that contained the signatures of the SBC’s current president, J.D. Grear, along with former Convention presidents, who are backing Kavanaugh. Prominent national evangelical figures such as Jack Graham, Franklin Graham, Greg Laurie, Samuel Rodriguez, and David Jeremiah have expressed their pleasure in the President’s decision to nominate Kavanaugh.

Numerous conservative organizations on the state level have also signaled their support for Kavanaugh, Ohio Right to Life and Wisconsin Right to Life, to name just a couple.

In a statement released on Monday evening, Tami Fitzgerald, executive director of the North Carolina Values Coalition, said, “The NC Values Coalition celebrates President Trump’s nomination tonight of Judge Brett Kavanaugh to the Supreme Court to replace the retiring Justice Anthony Kennedy. Many North Carolinians voted on the promise that President Trump would appoint strong originalists to the Supreme Court, and Judge Kavanaugh’s record reflects that commitment. We commend President Trump for this excellent pick, and we look forward to seeing Senators Tillis and Burr vote with their colleagues to confirm him.”

John Rustin, president of the North Carolina Family Policy Council, claims that “Judge Kavanaugh appears to be a strong choice for the U.S. Supreme Court. He has impeccable qualifications and is known to be a man of great integrity, high intellect, judicial restraint, and a commitment to the original intent of the Constitution. We anticipate the U.S. Senate will confirm the nomination of Judge Kavanaugh to our nation’s highest court.”

Rev. Mark Creech, executive director of the Christian Action League of North Carolina, said “I recognize the significance of this moment. I hope other Christians recognize it for what it is too. Kavanaugh’s nomination is monumental. I believe it may indeed be the answer to many prayers and, in part, the culmination of 30 years of political advocacy by conservative Christians to turn this nation around. I don’t mean it’s a fix for our spiritual poverty. But it could mean the death knell of judicial tyranny, at least by a court that has acted more as an oligarchy. If Kavanaugh is confirmed, it should tip the scales of the Court back to the right for a generation or more. May God have mercy on us!”

Cases that demonstrate Kavanaugh’s commitment to religious liberty, the sanctity of human life, and marriage and the family include Priests for Life v. U.S. Department of Health & Human Services, where Kavanaugh voted to prevent the Obama administration from enforcing its contraceptive mandate against religious groups.

Kavanaugh dissented in the case of Garza v. Hargan, a case in which the ACLU argued for abortion on demand for illegal immigrant minors seized at the border. Kavanaugh concluded that the D.C. Circuit Court’s decision was “based on a constitutional principle as novel as it is wrong: a new right for unlawful immigrant minors in U.S. government detention to obtain immediate abortion on demand. …The majority’s decision represents a radical extension of the Supreme Court’s abortion jurisprudence.”

In Newdow v. Roberts, a case that challenged the prayers prayed at the Presidential inauguration and use of the phrase “So help me God” in the oath of office, Kavanaugh argued that these did not violate the establishment clause of the First Amendment.

Arguably, Kavanaugh addressed an issue surrounding the Fourth Circuit Court of Appeals judgment in Gavin Grimm v. Gloucester County School Board. In this case, concerning a transgender teenager, the Fourth Circuit agreed with the Obama administration’s interpretation of Title IX, which passed in 1972, and said the word “sex” included the subjective expression of “gender identity.” Kavanaugh expressed his position on such matters while on the D.C. Court. In a case involving net neutrality, he argued that when statutes are found to be “ambiguous,” then, quoting the late Justice Scalia, “We expect Congress to speak clearly if it wishes to assign to an agency decisions of vast economic and political significance.” In other words, Kavanaugh refused to define the meaning of certain words in unclear laws, but argued this was the responsibility of Congress, not the courts. 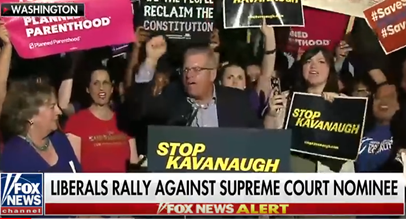 Rev. Creech said he expects the fight to confirm Kavanaugh in the Senate to be intense.

“Protests have already started in many places around the nation. Most Democrats will oppose Kavanaugh because they hate Trump and anything he does. They’ll also oppose him because they desperately need a sizeable political win, such as defeating a Supreme Court nominee, as they move further into the mid-term elections. Many Progressives and Leftists will oppose him because they understand that having Kavanaugh on the Supreme Court will complicate their ability to get their agenda through. They’ll need to build a national consensus and get approval by the legislative process, rather than looking to the courts to accomplish their goals via judicial fiat,” said Rev. Creech.

“This is truly a momentous time in our nation’s history. We must pray, and pray earnestly,” added Rev. Creech.