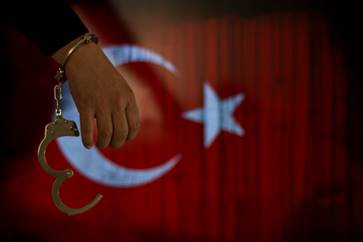 The trial of Andrew Brunson, the American evangelical pastor from Black Mountain, North Carolina, began in Izmir, Turkey, on Monday. Brunson has been accused of the “crime” of “Christianization,” which Turkey equates with an act of terror. If convicted of the crime, Brunson would face at least 35 years in a Turkish prison.

During the trial, the imprisoned pastor who has served the Turkish people for more than twenty years as a Christian missionary claimed he was completely innocent of all the charges against him. The Hurriyet Daily News reports Brunson telling the court, “I want the whole truth to be revealed. I reject all the accusations in the indictment. I haven’t been involved in any illegal activity.”

He added that he had never done anything against Turkey. “On the contrary, I love Turkey,” he said. “I have been praying for Turkey for 25 years.”

Anadolu Agency, a state-run news agency of the Turkish government says Brunson also told the court, “I am a Christian pastor. I did not join an Islamic movement. Their aims and mine are different.”

The Asheville Citizen-Times notes that the pastor’s plight has weighed heavily on Brunson’s family and friends in Black Mountain and Montreat. Members of the Christ Community Church in Montreat have been praying earnestly for his release since he was arrested in the aftermath of a 2016 coup attempt in Turkey. Brunson has been accused of “links to the outlawed Kurdistan Worker’s Party, or PKK, as well as a network led by U.S.-based Muslim cleric Fethullah Gulen, who is blamed by Turkey for the coup attempt.” The indictment essentially contends that “the pastor worked to convert Kurds to Christianity to sow discord.”

Turkey wants the U.S. to extradite Gulen to Turkey in return for Brunson. But Gulen denies any involvement in the attempted coup. Brunson appears to be just a political pawn for leverage by Turkish authorities that are determined to get to Gulen by any means necessary.

North Carolina Senator Thom Tillis, who visited with Brunson last month in Turkey, attended the trial on Monday, along with the U.S. Ambassador at Large for International Religious Freedom, Sam Brownback.

According to the American Center for Law and Justice, both Tillis and Brownback were “infuriated” by the trial.

Tillis said the proceedings were “truly a kangaroo court…Not fair at all,” reports the Raleigh News and Observer. The N&O also reports that Tillis met with Brunson’s wife, Norine, who remains in Turkey to be near her husband. She’s being supported by the 50 or more members of the church her husband founded. Tillis says that the idea of an exchange of Gulen for Brunson is “absurd.” Furthermore, he contends that Turkey would do better to be having trade talks with the U.S. and finding ways the two countries might strengthen their relationship as allies. But Tillis, who is the co-leader of the Senate’s NATO Observer Group declared, “I’m not going to facilitate those discussions, as long as pastor Brunson is in prison.”

The trial consisted of almost 13 hours of secret witnesses that testified by video link with their faces and voices obscured. The judge ordered that the trial continue on May 7th, and Brunson was sent back to a cell that is supposed to house only 8 prisoners but currently contains more than 20.

Jay Sekulow, head of the American Center for Law and Justice said, “We must increase the diplomatic pressure on Turkey to release this innocent U.S. citizen. The fact that Senator Tillis – Pastor Andrew’s home state Senator – and Ambassador at Large for International Religious Freedom Sam Brownback were present at today’s trial is an important step. Turkey must understand that as a NATO ally it cannot be allowed to continue wrongfully imprisoning an innocent U.S. citizen.”

On Tuesday, President Trump tweeted out his support for Pastor Brunson, saying, “Pastor Andrew Brunson, a fine gentlemen and Christian leader in the United States, is on trial and being persecuted in Turkey for no reason. They call him a Spy, but I am more a Spy than he is. Hopefully, he will be allowed to come home to his beautiful family where he belongs!”

The President’s tweet was followed by a tweet from Vice President Pence on Wednesday, which said, “Spoke to Pastor Brunson’s wife this week. Assured her of our prayers & POTUS & I are monitoring his trial in Turkey. Pastor Brunson is a good & godly man who should be reunited w/his family, friends & congregation. It’s time the Turkish govt release him. #FreeAndrewBrunson.”

“There is power in prayer,” said Creech. “Turkish authorities may spurn our government’s request and actions for Pastor Brunson’s release, but there isn’t the first thing that they can do about our prayers.”

“God told Abraham that he would bless those that bless him and his descendants. I suggest that not only applies to the Jewish people, but it is also just as applicable to the children of Abraham by faith – every born-again believer in Jesus Christ. So may God richly bless Sen. Thom Tillis!” declared Creech.