You are here: Home / Christian Action League / The Ten Commandments: A Challenge to Churches on Giving Tuesday 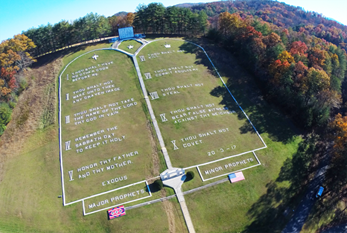 There is a place in Murphy, North Carolina, which showcases a gigantic display of the Ten Commandments on Burger Mountain. The lettering that spells out each of God’s rules for right living is five feet in height and at least four feet wide. You can actually see this marker from five thousand feet in the air. It’s an awesome sight.

Such monuments are just as important, I think, as the Statue of Liberty, the Washington Monument, or Mount Rushmore. Why? Because the Ten Commandments at Fields of the Wood in Murphy, N.C. reminds us of the source of our freedom.

When Moses came down from Mount Sinai with the Ten Commandments in his hands, written by the finger of God, he was giving to the nation of Israel God’s ten principles for sustaining liberty. The Lord had delivered the Israelites from Egyptian slavery. For hundreds of years, the government had been in complete control of their “life, liberty, and the pursuit of happiness.” Now, God was saying that if they would follow these commandments, they could stay free.

The Scripture tells us, “Righteousness will exalt the people and sin diminishes a people” (Prov. 14:34).

Samuel Adams, the father of the American Revolution, admonished, “While the people are virtuous they cannot be subdued; but when once they lose their virtue they will be ready to surrender their liberties to the first external or internal invader.”

The Christian Action League of North Carolina exists to provide for our state, nation, as well as local legislators and policymakers; a moral compass based on God’s true North – His Ten Commandments. Lawmakers must constantly be reminded of these principles, lest they forget them and write immorality into our statutes.

This is our objective, although admittedly, it is not always the reality. But the fault is not so much the Christian Action League. I suggest the ineffectiveness at times in getting lawmakers and other public officials to make the right choices has more to do with our churches. There desperately needs to be more participation by the churches in holding up these standards [The Ten Commandments] to the country, rather than acquiescing to unrighteous cultural pressures.

Alexis de Tocqueville, the famous 19th-century French statesman, who traveled to America during the 1830s to discover the reason for our nation’s incredible success, said:

“I sought for the key to the greatness and genius of America in her harbors…; in her fertile fields and boundless forests; in her rich mines and vast world commerce; in her public school system and institutions of learning. I sought for it in her democratic Congress and in her matchless Constitution. Not until I went into the churches of America and heard her pulpits aflame with righteousness did I understand the secret of her genius and power.”

As a part of Giving Tuesday, I call upon conservative evangelical churches across North Carolina to give more to turn our state and nation back to its religious moorings.

More specifically, let me call upon churches to do more to partner with the Christian Action League in providing our elected officials a prophetic witness. One that says, “Thus saith the Lord,” whenever they take up a legislative initiative.

This is what the Christian Action League is all about and it’s an incredible responsibility.

Won’t you help us? Or will you leave us to go up to the battle alone?

You can go to this link and make a secure gift online to this ministry:
https://give.cornerstone.cc/christianactionleague

You can also send your donation to: