You are here: Home / Christian Action League / The Solar Eclipse: A Sign of Judgment for America? 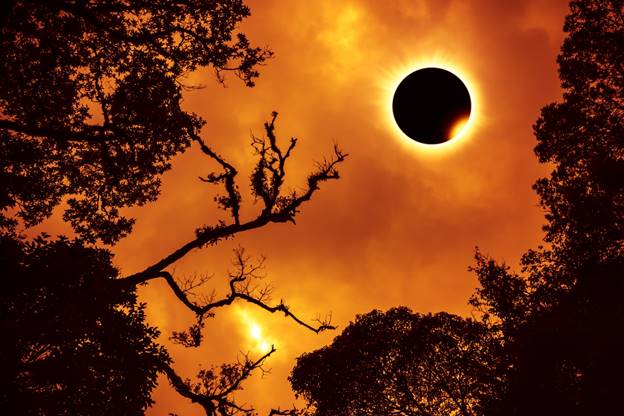 Harry was a caretaker of a recreation lodge on Spirit Lake about five miles north of Mt. Saint Helens. For two months there had been a series of small earthquakes and steam venting episodes on the volcano located in Skamania County in Washington State. All the evidence predicted that the great mountain would erupt with a fury and leave the forests flattened.

The Rangers urged Harry to evacuate, but he wouldn’t listen. Some of his neighbors begged him to join them in their exodus. His sister pleaded with him to be sensible. But Harry ignored every warning.

“Nobody knows more about this mountain than Harry and it don’t dare blow up on him,” Harry said.

One can only wonder in that millisecond after Mt. Saint Helen’s mega-nuclear type explosion occurred on May 18, 1980, with its eruption column reaching 80,000 feet into the air, if Harry regretted his decision. Harry, along with 56 other people like himself, was not only caught in the blast that leveled the glorious woodlands around him into toothpicks for hundreds of square miles but also created a Tsunami of mud and ash that buried him, his cabin, his cats, and his freshly mowed lawn. It was the worst volcanic eruption in United States history.

Harry had all the signs to escape the wrath of the mountain, but he stubbornly ignored them.

There has been much ado lately about the solar eclipse expected on August 21st. No eclipse of this kind has occurred in the continental U.S. observable from coast to coast since 1918. It is a big deal and people across the nation are planning to watch the phenomenon in celebratory ways.

But could the eclipse be a sign from God?

Anne Graham Lotz, daughter of world-renowned evangelist, Dr. Billy Graham, thinks that it might be a warning. In a blog on her website titled, Is God’s Judgment Coming on America? Lotz recently said, “People are preparing to mark this significant event with viewing parties at exclusive prime sites. The celebratory nature regarding the eclipse brings to my mind the Babylonian King Belshazzar who threw a drunken feast the night the Medes and Persians crept under the city gate. While Belshazzar and his friends partied, they were oblivious to the impending danger.  Belshazzar wound up dead the next day, and the Babylonian empire was destroyed.”

Lotz added, “While no one can know for sure if judgment is coming on America, it does seem that God is signaling us about something.”

I’m inclined to agree with her, as well as a number of other Christian leaders, who’ve made similar remarks.

Although solar eclipses are not always a sign of God’s coming judgment, in Scripture the darkening of the sun is associated with forthcoming calamities at the hand of God.

The prophet Ezekiel foretold the destruction of Pharaoh and Egypt saying, “And when I extinguish you, I will cover the heavens and darken their stars; I will cover the sun with a cloud and the moon will not give its light” (Ezekiel 32:7). Joel, in his prophecy of the terrible day of the Lord, says, “The sun will be turned into darkness and the moon into blood before the great and awesome day of the Lord comes” (Joel 2:31). The Apostle John in his depiction of earth’s last days writes, “I looked when He broke the sixth seal, and there was a great earthquake, and the sun became black as sackcloth made of hair, and the whole moon became like blood” (Revelation 6:12).

Certainly, the most significant mention of a solar eclipse in the Bible was recorded as having occurred during the crucifixion of Christ. The New American Bible rightly translates Luke 23:44-45, saying that while Christ was upon the cross of Calvary, “It was now about noon and darkness came over the whole land until three in the afternoon because of an eclipse of the sun.”

In Christ’s death on the cross, when the sun was eclipsed, God was judging the sins of the world. Moreover, Jerusalem’s destruction was also imminent because of her sin, which was a figure of the general judgment of all the nations that reject the Lord’s Christ.

It’s significant, I think, that the coming solar eclipse on August 21st is called the Great American Eclipse. It will arch the country from Oregon to South Carolina. This total eclipse will touch only one country: the United States. A century ago, the total eclipse of 1918 swept from the west coast to the east coast too, but it also visited the Bahamas. This one, with its possible implications of a coming judgment, seems strictly for America.

America is definitely ripe for judgment. This nation has become a fountainhead of moral putridity, and its influence is global. Judgment is always an act of God’s justice against sin, but it can also be an act of his mercy. When God judged Adam and Eve for their sin, sentencing them to death and casting them out of Eden, it was an act of mercy lest they should live in an eternal state of depravity. When God judged the world with a universal deluge in Noah’s day, it was an act of mercy lest mankind in his wickedness and rampant violence destroy the human race. Perhaps God’s judgment of America’s great evils would be an act of mercy, saving much of the rest of the world from the spread of her transgressions, and making us an example of the need to repent and believe.

In just a few days, the sun will turn black across our land. Is it a sign from the heavens calling upon our nation to turn from its sins and to Christ or suffer the consequences? I don’t really know. What I do know, however, is that we would be wise to treat it as though this very well may be the case.

Think about the matter carefully. Many dangers seem to be on the horizon for our country. Figuratively speaking, only the most stubborn and unreasonable could feel the rumblings and witness the steam venting of current events and not abandon their sin. Perhaps the darkened sun bespeaks the need to flee from being buried beneath the concussion, mud, and ash of God’s mighty wrath.