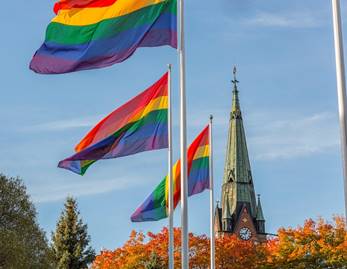 Religious progressives filed an amicus brief with the U.S. Supreme Court in the blockbuster religious freedom case involving Masterpiece Cakeshop. The brief featured prime examples of the polemic so often employed by the Religious Left. It also promoted at least seven myths about the debate over same-sex marriage and religious freedom.

“Amici accordingly urge the Court to reject Petitioners’ plea for a First Amendment-premised exemption,” they argued.

The brief surely served to project the Religious Left values of its authors. It also promoted some erroneous lines of argument. Here are seven myths implicitly and explicitly promoted in the brief:

Human dignity serves as a point of connection between the crux of this dispute – namely, prohibited discrimination by a business open to the public – and religious perspectives on LGBT persons and same-sex.

The clear implication is that Jack Phillips, along with anyone else declining to participate in same-sex weddings, fails to respect LGBTQ people and denies their inherent dignity. But this is simply false.

As discussed in greater detail in my previous post, Jack Phillips has made clear that he has no objection to LGBTQ customers or employees. He only refuses to participate in same-sex weddings and other celebrations (like Halloween) that violate his conscience. The same is also true for many other religious individuals.

Myth #2: The First Amendment Does Not Protect People of Faith in the Public Square. The brief included this troubling statement:

Petitioner Jack Phillips has every right to his religious beliefs concerning marriage and to lawfully act on those beliefs in his personal and religious life. But once he held himself out as a baker marketing wedding cakes to the general public, he became subject to public accommodation laws like CADA.

No one should be forced to confine practicing their faith to their home or place of worship. Constructing a partition between publicly and privately expressing one’s convictions lays the groundwork for widespread curtailing of religious freedom in the United States.

Myth #3: Allowing Exemptions to Anti-Discrimination Laws Will Lead to “Blanket Discrimination.” Amici stated that is was “morally wrong and not constitutionally required to permit blanket discrimination in the public marketplace.” It’s one matter to debate whether anti-discrimination laws regarding sexual behavior should exist. It’s entirely separate to grant exceptions to rules for legitimate conscientious objectors. Allowing sincere people of faith to decline to participate in same-sex weddings does not equal allowing “blanket discrimination” across the country.

Myth #4: It’s Morally Okay to Bring Fellow Christians to Court over Political Disagreements. Although this was not explicitly stated, this premise is implicitly affirmed by the involvement of “Episcopalians, Lutherans, Methodists, Presbyterians, and Unitarians” in authoring and filing the brief with America’s highest secular court.  These ostensibly Christian organizations and individuals apparently forgot or chose to ignore 1 Corinthians 6:1-11. The Apostle Paul wrote that it was to the “shame” of the Corinthians for bringing legal cases before civil courts:

“When one of you has a grievance against another, does he dare go to law before the unrighteous instead of the saints? … To have lawsuits at all with one another is already a defeat for you.” (ESV, 1 Cor 6:1,7a)

This biblical dictum should give pause to anyone claiming to serve Jesus Christ but brings their Christian brothers and sisters to court to achieve political ends.

If he refused to bake a cake for an interracial couple on the ground that his religion taught him that marriages can properly exist only between persons of the same race, we respectfully submit that few would give this objection much credence.

But this is not what Phillips asserted. He declined to participate in same-sex weddings to avoid affirming homosexual behavior, a practice which his religious beliefs qualify as immoral. It would be completely different to refuse to participate in interracial marriages because of racist beliefs about the inherent inferiority of other ethnicities, which no mainstream religion affirms.

Myth #6: There is a Legitimate Christian Argument for Same-Sex Marriage. No serious interpretation of the Bible concludes that Scripture requires Christians to affirm homosexual behavior. However, amici attempted to convince the Supreme Court of exactly that: “some leaders from unquestionably ‘traditional’ religious groups deem the embrace of civil nondiscrimination to be required by foundational religious tenets.”

However, these facts don’t stop religious progressives from speculating that the Bible actually does support homosexual practice. (For example, one activist identified biblical patriarch Joseph as transgender because his multicolor coat was actually a “princess dress.”) Thus they continue lobbying to make civil and ecclesiastical law more accommodating of same-sex marriage.

Myth #7: The Supreme Court’s Decision Won’t Undermine Religious Freedom. It would make the Supreme Court’s decision easy if siding against Jack Phillips and Masterpiece Cakeshop actually made no difference on the question of religious freedom, as religious progressives argued in their brief:

Affirmance poses no threat to religious liberty, either on the facts of this dispute or in general. To the contrary, reversal would upend longstanding Free Exercise jurisprudence by granting Phillips the unilateral right to excuse himself from generally applicable legal duties having little or nothing to do with his actual religious exercise.

But the truth is that countless other business owners and artists will be affected by this decision.