You are here: Home / Rev. Creech's Commentary / The Real Motive behind the Opposition to Judge Roy Moore

It was this principle at the forefront of my thinking while watching CNN’s Anderson Cooper grill Janet Porter in an interview on Wednesday. Porter is the spokesperson for Alabama Senate candidate Roy Moore’s campaign.

Although the liberal Huffington Post described the interview as a take-down of Porter by Cooper, I was struck with just the opposite impression. I thought Porter sufficiently addressed Cooper’s questions. It was Cooper’s questions, I believe, that were telling, revealing the actual motive behind the left’s zealous opposition to Roy Moore.

They hate and oppose Roy Moore because of his faith. It’s not that the left hates faith in general; it’s that they hate conservative evangelicals and what they represent. The left despises them so badly they are willing to run them out of public life at any cost.

After fielding a number of queries about alleged sexual misconduct by Moore, Cooper, who is openly gay, asked Porter, “Does Judge Moore still believe homosexual conduct should be illegal and homosexuality is still the same as bestiality?”

After struggling to regain her footing from being blindsided by the question (and for good reason), Porter finally said, “I believe he believes the Bible and what the Bible has to say.”

Certainly, homosexuality and bestiality are separate issues, but the two are listed in the Scriptures as acts of sexual deviance. Times may have changed. God hasn’t. Moreover, the Bible nowhere speaks of homosexual practice in a positive light, and a biblical economy does make it illegal.

Despite the fact that throughout our history most Americans have believed this, it would be terrible if anyone who now believes this way should be elected to the United States Senate. Right?

This is really why the left hates Moore and will do whatever it takes to diminish or discredit him. He’s an affront to the new guard – the new morality meant to supplant biblical values. For the left, your religion is okay, your Bible is okay, your Jesus is okay, as long as each is reinterpreted to reflect leftists’ values – as long as you believe politics is a domain to be kept from the influence of Christian orthodoxy.

Cooper also asked Porter, “Does he [Judge Roy Moore] still believe that 911 may have happened because we distanced ourselves from God?” Porter said she didn’t know the answer to that question.

A lot of Christians actually believe 911 may have happened because our nation has distanced itself from God. It’s a legitimate concern.

The Bible is replete with examples of the way God warned civilizations to turn from their rebellion and ultimately judged them when they didn’t. There are historical accounts about nations in the land of Canaan, Sodom and Gomorrah, Nineveh, and Israel.

Thomas Jefferson, the third President of the United States, possessed this same belief and once declared, “I tremble for my country when I reflect that God is just; that his justice cannot sleep forever.”

In a letter to Albert G. Hodges, President Lincoln alluded to the Civil War as a cause for God’s judgment on America for slavery. Lincoln wrote, “I claim not to have controlled events, but confess plainly that events have controlled me. Now, at the end of three years struggle, the nation’s condition is not what either party, or any man devised, or expected. God alone can claim it. Whither it is tending seems plain. If God now wills the removal of a great wrong, and wills also that we of the North as well as you of the South, shall pay fairly for our complicity in that wrong, impartial history will find therein new cause to attest and revere the justice and goodness of God.”

But who would want a United States Senator that believes something so extreme? Right?

Do you see? This is why they hate Moore. He makes God a part of the equation.

Finally, Cooper asked Porter, “Does he [Roy Moore] still believe an America citizen who’s a Muslim should not be able to serve in Congress?”

Porter responded, “I think what he’s getting at there is we believe in the rule of law by the Constitution, not Sharia law.”

Cooper then cited a past statement by Moore in which he said he didn’t think it was proper for Minnesota Congressman, Keith Ellison, to swear his oath on the Quran.

Cooper and his ilk, obviously fall in the same category spoken of by Dr. David Miller with Apologetics Press. Miller wrote, “The multi-culturalism, pluralism, ‘diversity,’ and political correctness that now blanket American culture mean that many are oblivious to and unconcerned about the threat that Islam poses to the American (and Christian) way of life. The Founders of the American Republic were not so dispossessed. They were well-studied in the ebb and flow of human history, and the international circumstances that could potentially impact America adversely. They, in fact, spoke openly and pointedly about the anti-American, anti-Christian nature of the religion of Islam.”

John Quincy Adams said, “The fundamental doctrine of the Christian religion is the extirpation of hatred from the human heart…The Ottoman lays it down as the foundation of his discourse.”

In other words, although in times past, some Christians have behaved with animus, when doing so they were in violation of Christian teaching. However, Islam’s all-encompassing, predominant, so-called moral principle is ‘whatever advances Islam, by whatever means, is right.’ Islam allows for stealing, pillaging, killing, destroying, and lying (even lying while taking an oath to the Constitution) if it furthers the expansion and domination of Islam.” 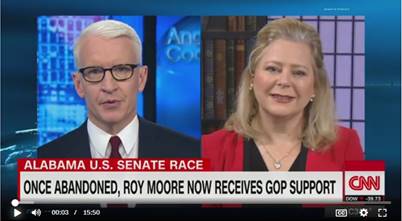 There indeed may be no religious test for serving in Congress. Nevertheless, why shouldn’t Moore, as well as every American have concerns about the ascendancy of Islam?

Yet who would want a United States Senator that was not bewitched by uninformed political bias and has a firm grip on what is true religion and history? Right?

This is why the left despises Roy Moore. They are even willing to sacrifice one of their own, Sen. Al Franken, if it strengthens their case against the Judge.

Although sexual misconduct is serious, whether Moore is actually guilty of the sexual allegations against him is not what’s fueling the current effort to destroy him. The real issue is leftists hate conservative evangelicals and what they represent. Biblical convictions are anathema to the political left. They want them in the back of the bus and nowhere near the political process.