You are here: Home / Christian Action League / The Floods Have Lifted Up Their Voice 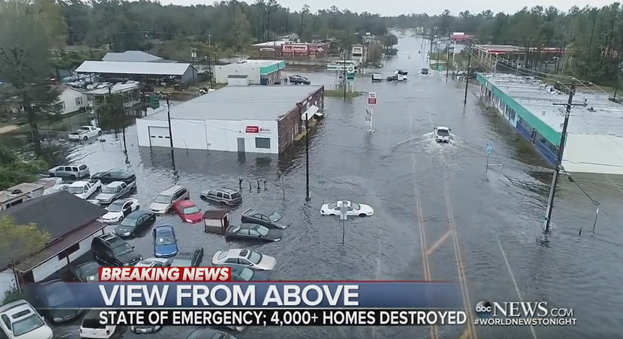 While the winds of Hurricane Florence howled and the torrents of rain fell, I happened upon Psalm 93:3-4 in my daily reading of Scripture.

The aftermath of Florence is extraordinary. Thirty-three have died. Nearly 300,000 people are still without power, but that’s down from 1.4 million. The Cape Fear River is set to crest at 62 feet. There are 1,100 state roads that remain closed because of the flooding. Eighteen counties have major federal disaster declarations, and still, others are expected to follow. There are 73 states of emergency still active. Seventy-seven shelters remain open with about 10,000 people. Over 5,500 pigs and 3.4 million chickens have been lost to the flood waters. Four hog lagoons have been compromised, while 13 are overflowing and 55 are close to spilling over. Crops of peanuts, cotton, and tobacco have been lost. In some cities, thousands and thousands of gallons of wastewater have spilled into various tributaries, streams, and rivers. Damages have been estimated at around $17 billion. North Carolina’s Governor, Roy Cooper, warns that 16 major rivers are at flood stage and that even though the storm has passed, it’s far from over.

Indeed, the flood waters are lifted up, way up! But, adds the Psalmist, “The Lord on high is mightier than the noise of many waters, than the mighty waves of the sea.”

It was by his mighty power that the Lord, after the great universal deluge of Noah’s day, commanded the waters to go back to their places. It was the Lord who rebuked the Red Sea, and it became dry land. It was the Lord who effortlessly drove back the waters of the Jordan for the Israelites to pass through, and with equal ease can do the same again.

What we have witnessed reminds us that after our many achievements, after our incredible advances in technology, medicine, transportation, communication, and other human endeavors, we are still merely mortals subject to the basest of earth’s elements. We are exceedingly small and vulnerable in creation’s scheme.

Governor Cooper was right when he recently told the news media, “We’ll get through this. North Carolinians are a resilient people.”

Nevertheless, let us guard against this becoming an occasion for pride. It is the Lord, and the Lord alone, who “is mightier than the noise of many waters, than the mighty waves of the sea.” The monstrous whirlwind ought to teach us humility and lead us to acknowledge that not only is he sovereign over the lash of the storm, the rush of the prodigious rivers, the immense waves that roar, but that he should also be sovereign over our hearts.

In his commentary on Psalm 93 in “The Treasury of David,” Charles Spurgeon said that our sin, our rebellion, our unwillingness to submit to Christ’s Lordship is also much like a tempest. He eloquently wrote:

“The ungodly are all foam and fury, noise and bluster, during their little hour, and then the tide turns or the storm is hushed, and we hear no more of them; while the Kingdom of the eternal abides in the grandeur of its power.”

Pastor Browning Ware once said, “Our worst circumstances may be God’s best opportunity to bring new meaning to our lives.” God can literally and figuratively calm the storm and flood waters of life, if we will look to him in faith.

We may pass through the stom safely. The sun comes out again and eventually we may recover everything lost in the hurricane. But, if we miss the opportunity the storm gives for seeing the hand of God and experiencing his grace and mercy, failing to recognize his right to benevolently rule over us, we will suffer a loss on the Day of Judgment which can never be recovered, even the loss of our own souls. Natural disasters are only for a season. Death beyond death, cut-off from God forever by the treacherous waters of his wrath, is disastrous beyond compare.

If you will listen carefully, you can hear “the floods have lifted up their voice.” There may be many messages in their sound. One message, however, is dominant. The voices from the wind and water instruct:

“You desperately need God. He reigns over everything. All power in heaven and earth belongs to him. Therefore, humble yourself before him. Turn away from your sins. Believe with your whole heart in Christ and follow the Lord. Christ will calm the troubled waters of your spirit, deliver you from the Evil One’s temptations when they come in like a flood, and command the waters of affliction not to overwhelm you in this life or the mighty winds of his justice to blow you away like chaff in the next.”