You are here: Home / Christian Action League / The Child Playing in the High Window 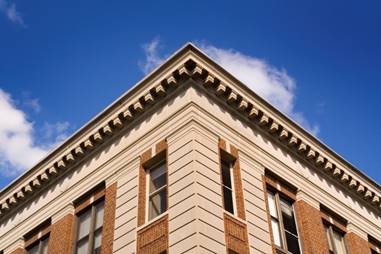 There are some luxury apartments not far from my office with about five floors to each building. Not long ago, I looked up from my computer where I was writing and spied a small child playing in a window high on the fourth floor. The youngster wasn’t simply gazing out of it but had her whole body dangerously inside the frame.

Alarmed that she might plummet to her death at any minute, I rushed outside and hurried toward the building, waving my arms and shouting, “Sweetheart, go back! Go back! Go back!” When she didn’t heed my warnings, I alerted a young couple standing nearby of her peril. They quickly made their way beneath the window to spot what was happening. When they could see the child clearly, they sought to allay my fears by telling me that there was a screen in the window. I suppose realizing the commotion was about her, the child moved away at that point, and the danger seemed abated.

But I dropped the matter until a few days later I looked up from my computer to witness the same frightening scenario taking place again. This time I walked straight over to the apartment complex and firmly asked for the person in charge. He greeted me, and I swiftly escorted him outside and pointed out the problem.

I said to him, “Can you guarantee the screen in that window will keep that little girl from falling out?” He responded, “No, in fact, I don’t think that screen can protect her.” I replied, “Well, you better address this issue with the tenant in that particular apartment before that child’s blood is splattered on the sidewalk and onto your hands.”

Since that time I haven’t seen that precious little one playing in the window again.

This harrowing experience made me think of something I had once read by William Barclay in his book, Ethics in a Permissive Society. Barclay said:

“One of the outstanding features of the Jewish law [Old Testament law] is its stress on responsibility. A man is not only responsible for what he does; he is responsible for the wrong thing he might have prevented and the damage for which he is to blame because of his carelessness or thoughtlessness. If an ox gores someone, if the ox was not known to be dangerous, then the ox is killed and the owner goes free; but if it was known that the ox was dangerous, then not only is the ox killed, but its owner too is liable to the death penalty (Exodus 21:28-32). Palestinian houses were flat-roofed and the flat roof was often used as a place of rest and meditation. So it was laid down by the law that if a man built a house he must build a parapet round the roof, ‘that you may not bring the guilt of blood on your house, if anyone fall from it’ (Deuteronomy 22:8).

The prophet Ezekiel spoke about this same principle but gave it an additional application. Speaking for the Lord as a prophet would, he declared, “When I say to a wicked person, ‘You will surely die,’ and you do not warn them or speak out to dissuade them from their evil ways in order to save their life, that wicked person will die for their sin, and I will hold you accountable for their blood” (Ezekiel 3:18).

Several years ago my wife and I visited Niagara Falls with some friends who didn’t live far from there. While we walked among the many tourists, one of our friends passed along a Gospel Tract to a man standing near her. The man looked at the Tract with disdain and then flung it back at our friend along with some strong language. I will never forget my friend’s response later. She sadly shrugged her shoulders and with disappointment said, “Well, his blood is not on my hands.”

These are dark days we are living in and are seemingly getting darker by the minute. Lives are at great risk. This is no time for Christians to be silent in word or good deeds. People desperately need to know Christ. They need to hear of His power to save from sin. They also need to be able to observe His transforming power in our own lives. Furthermore, they need to be warned of those matters that could cost them their health, their home, and their hope for a meaningful life. Salvation is not just for the soul, but for the whole man.

If Christians are silent, if we choose to treat our faith as though it were little more than fire insurance to save one’s soul from perdition, then we betray the Christ who sacrificed everything to redeem us. If we are unwilling to face the subtle as well as obvious intimidations of those who would silence us, if we confine our utterances or actions simply to that which garners the public’s favor, then we betray our calling to let God speak through us. Moreover, we will have blood on our hands.

We have to point out that child hazardously playing in the high window.