You are here: Home / Rev. Creech's Commentary / ‘The Angelic Fallacy:’ Do You Suffer from It?

It was back in the early seventies that I first fully surrendered to Christ. When I joined the fellowship of believers whose influence had made a profound impact on my spirituality, I remember it wasn’t uncommon to hear someone witnessing of their newfound faith, saying, “I got saved.” It’s an expression you don’t hear much anymore.

When was the last time you heard a Christian ask an unbeliever, “Have you been saved?”

In fact, the last time I heard the term used, it was in a comical, almost mocking context, in the 2000 adventure movie, Oh Brother, Where Art Thou? A certain scene depicts the film’s main characters Everett, Pete, and Delmar, unwittingly coming upon a baptismal service at a river. Everett, the skeptic, looks on the gathering with criticism, while Delmar and Pete join in by being baptized themselves and claim to be “saved.”

For a lot of people, the phrase, even the concept itself, is beneath them.

The late Southern Baptist preacher extraordinaire, Frank Pollard, used to say that the erroneous shame in rejecting or being unwilling to employ such an expression was based on what he called “the angelic fallacy.”

“The angelic fallacy is probably the most damaging sin of modern Christendom. It blinds us to our sinful weakness and leads us to a spiritually defeating self-confidence.

“My favorite newspaper reading is a column of Roddy Stinson. One day I carelessly put a quarter in the wrong machine and soon found myself reading another writer’s daily offering. This journalist was decrying the fact that a murderer had professed faith in Christ and declared that he had been ‘saved.’ The journalist said she didn’t like the word ‘saved.’ She preferred the term ‘enlightened.’ Ah, the angelic fallacy. We don’t need to be ‘saved.’ We only need to be ‘enlightened.’  To be saved means you know that you are hopelessly lost. To be enlightened only calls for a little instruction.

One must come to the end of himself/herself before experiencing the transformation of life Christ gives and the eternal life he promises to everyone who believes.  We must admit that we are sinners – dirty, rotten, filthy, and hopelessly unable to live in the manner God requires – hopelessly unable to earn his favor – hopelessly incapable of being good enough to win the prize of a place in heaven.  It is then and only then that we will reach out to God in Christ and trust his grace – his unmerited favor – and be SAVED.

The most powerful prayer anyone ever prays is something akin to, “Lord Jesus Christ forgive me of my sins and SAVE me. SAVE me from my waywardness. SAVE my life, turn it around, and give to me your free gift of eternal life. Lord, SAVE me.” 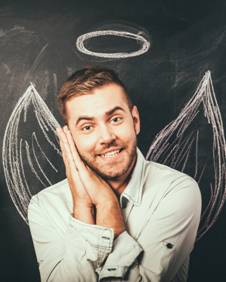 Do you suffer from “the angelic fallacy?”  In other words, do you think more of yourself than you ought – thinking that seeming spark of goodness in you is going to be enough to garner eternal life?  I have news for you. From God’s perspective, no matter how kind, philanthropic, decent and respectable you may see yourself, you are actually corrupt and worthy of his wrath. You’re not the angel you think you are.

The Scriptures warn us, “All of us have become like one who is unclean, and all our righteous acts are like filthy rags; we all shrivel up like a leaf, and like the wind our sins sweep us away” (Isaiah 64:6 NIV).

You need to be “saved.” It may be beneath the sensibilities of some to acknowledge it, but the fact of the matter is every one of us needs to be saved.

I GOT SAVED! What about you? Have you been saved?