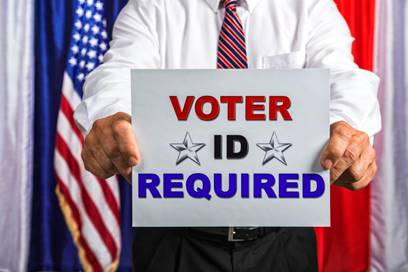 RALEIGH – Thursday, the House Rules Committee, approved a bill calling for a state constitutional amendment that would require a person to show a photo ID before voting.

The measure, HB 1092 – Constitutional Amendment – Require Photo ID to Vote, would make North Carolina the 35th state mandating some form of voter ID be shown at the polls. The Committee passed the bill largely along Party lines and by a margin of 21-9.

HB 1092 is being championed by House Speaker Tim Moore (R-Cleveland), along with other primary sponsors Rep. David Lewis (R-Harnett), Rep. Michelle Presnell (R-Yancey), and Rep. John Sauls (R-Lee). There are also more than 40 cosponsors from the House on the proposal.

Speaker Moore told the Rules Committee, “The overwhelming majority of North Carolinians support and believe that Voter ID is a common-sense measure we can do to ensure election integrity.”

Moore added that “North Carolina is the last state, the only state – in the Southeast that has not adopted some form of Voter ID already. We’re outside the mainstream…”

North Carolina’s neighbor’s Virginia, Tennessee, and Georgia have strict Voter ID requirements. All three states require voter identification at the polls and require that people without acceptable IDs to cast a provisional ballot and present a valid ID after Election Day.

“Voter ID protects the rights of all voters,” Moore admonished the committee. “It provides all voters the right to cast a secure ballot. Let’s be clear – concern for the security of our elections is bipartisan.”

But groups like the NC NAACP, the League of Women Voters, Common Cause North Carolina, and Democracy North Carolina disagreed, arguing during the public comments period that requiring Voter ID would make it harder for many in the state to vote.

The President of the NC NAACP, T. Anthony Spearman, told the committee that Voter ID mostly hurts black and poor voters and that the legislation was meant to suppress the vote of these people groups. While Dan Berry of Union County and Jerry Reinhold of Fayetteville insisted the electorate should be ensured of fair and honest elections.

The North Carolina General Assembly passed a Voter ID law in 2013, but the U.S. Department of Justice under the Obama administration, the NC NAACP under the direction of Rev. William Barber, named voters, and four churches filed suit against the law.

U.S. District Judge Thomas Schroeder, appointed by George W. Bush, upheld the measure as constitutional in April of 2016. But the very liberal Fourth Circuit Court of Appeals overturned the Schroeder decision and struck down the law in July of the same year.

U.S. Attorney General, Loretta Lynch, praised the Fourth Circuit’s ruling, claiming the law had contradicted some of the nation’s most basic principles of democracy.

Then Governor Pat McCrory, however, said the decision was a partisan one by three Democratic Justices who were undermining the integrity of North Carolina’s elections and also maligning the state.

In May of 2017, the U.S. Supreme Court refused to hear North Carolina’s appeal to the Fourth Circuit’s decision.

Rev. Mark Creech, executive director of the Christian Action League, wrote in defense of the controversial Voter ID Law in 2014. Creech said that voter fraud is real and always plausible.”

Creech cited the voter fraud that occurred when Lyndon Johnson was elected to the U.S. Senate in 1948 and his election was proven to be rigged in 1977, four years after Johnson’s death. He also cited Pasquotank County’s successful removal of more than 60 voters from their rolls after the 2012 election, when it became clear they didn’t live at the addresses on their voter registration.

Rep. David Lewis (R-Harnett), chairman of the House Rules Committee, said during debate on HB 1092 that he believed this provision for Voter ID would bring back the 2013 rules and would meet “federal [constitutional] muster.”

A full vote by the House is expected on Monday night