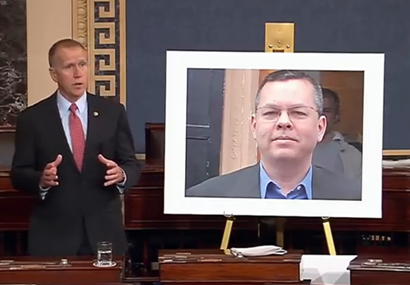 WASHINGTON, D.C. – Wednesday, North Carolina U.S. Senator Thom Tillis took to the floor of the Senate to speak about Black Mountain native, Andrew Brunson, who has been wrongfully imprisoned by the Turkish Government for his faith.

Brunson has ministered for more than twenty years in Izmir. He was arrested in October of 2016 on bogus charges related to espionage and terrorism and he faces up to 35 years in prison if convicted.

Brunson had his day in court last week in the city of Aliaga. Supporters had hoped the charges against him might be dropped, and that he would be released. Instead, he was sent back to prison until another court date set for May 7th.

Senator Tillis has visited with Brunson twice, including attending his trial on Monday of last week. Tillis says Brunson has now been in prison for more than 565 days.

The Tar Heel Senator solemnly vowed, “I heard from some people that Pastor Brunson was afraid, with the charges levied against him, that the American people would read the charges and forget about him and turn their backs. That’s why I decided to travel to Turkey and meet him in prison about a month ago to let him know that I have no intention of forgetting him, and have every intention of letting Americans know what is going on in this case.”

Last week, the State Department released a statement arguing that there was no “credible evidence” to justly convict Brunson of any crime. “We believe that Turkey is a state bound by the rule of law, and we have faith in the Turkish people’s commitment to justice. We hope that the judicial system in Turkey will resolve his case in a timely, fair, and transparent manner.”

Senator Tillis argued on the Senate floor that when he was North Carolina’s Speaker of the House, he lead a delegation from North Carolina to Turkey to strengthen economic and cultural ties. But he said now he seriously doubts if the Turkey he visited about six years ago is the same place today. Drawing from concerns about the way Brunson was being treated, Tillis said he was deeply troubled about whether it was safe for Americans to even visit Turkey and expect to be trusted justly.

Tillis said Brunson’s imprisonment is senseless. Referencing the attempted coup that occurred in 2016, Tillis said that Brunson and his wife Norine were back in North Carolina visiting with family while the president of Turkey was rounding up thousands of people, even those loosely suspected in the coup attempt and putting them in prison.

“During this time, Pastor Brunson and his wife traveled back to Turkey at a time when people were being rounded up and when they got back they rounded him up too. Why would any reasonable person who saw what was happening in Turkey go back if they were guilty? Tillis asked.”

Tillis also said that he had led in the formulation and sending of a bipartisan letter signed by 66 Senators to President Erdogan calling for Brunson’s release.

Tillis declared to the President of the Senate, “[Y]ou should know better than anybody, getting 66 Senators to sign-up on a letter that you spent three or four months doing it is uncommon. But to get 66 Senators to sign this letter together in a couple of weeks is extraordinary.” He also said the number 66 was to send a clear message to Turkey that there are already enough votes in the Senate to move in ways against Turkey that the United States would prefer not to do.

In the letter, the 66 signatories say they “are deeply disturbed that the Turkish government has gone beyond legitimate action against the coup plotters to undermine Turkey’s own rule of law and democratic traditions.  Under the State of Emergency, tens of thousands of Turkey’s own citizens, as well as some citizens of the United States and other countries, have been arrested, dismissed from employment or otherwise seen their lives destroyed on vague charges and dubious evidence.  These actions by the government of Turkey are inconsistent with the commitment to law and justice that have historically been hallmarks of Turkish democracy.”

The letter adds, “That the Turkish government has consistently ignored bipartisan expressions of concern from the Congress has also been a cause for concern.  Nonetheless, we chose to respect the working of the Turkish judicial system and await a just outcome.

The United States Government and millions of Americans deeply concerned by the Brunson case have been patient, in the hope that justice would be done and Pastor Brunson would be reunited with his family.  The signatories of this letter have concluded that other measures will be necessary to ensure that the Government of Turkey respects the right of law-abiding citizens and employees of the United States to travel to, reside in, and work in Turkey without fear of persecution.”

Tillis promised in his floor speech that he would keep the matter before the U.S. Senate on a weekly basis until the matter of Brunson’s imprisonment is sufficiently resolved. 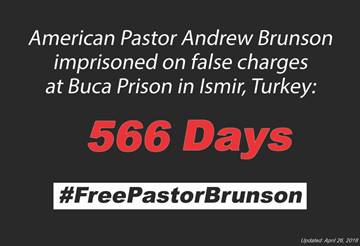 Dr. Mark Creech, executive director of the Christian Action League, renewed his call for Christians across the country to pray earnestly for Brunson’s release, especially Christians in North Carolina.

Creech also said Tillis is demonstrating what it really means to follow the biblical admonition in Proverbs 21 to “‘Open your mouth for the mute, for the rights of all who are destitute…to judge righteously and defend the rights of the poor and needy. He’s living out the real meaning of Jesus’ words, ‘I was in prison, and you visited me.’ My heart is full of gratitude to God for our Senator and the character he’s showing by championing for liberty, more specifically, for religious liberty.”

The Christian Action League is regularly in contact with Senator Tillis’ office in monitoring progress for Brunson’s release. “We stand ready to do whatever we can in North Carolina to contribute to our brother’s freedom,” said Rev. Creech.