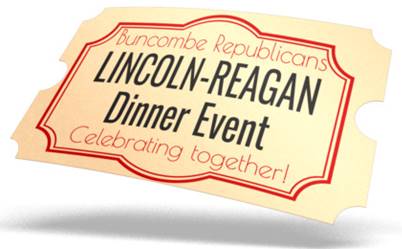 The Rev. Mark Creech had a special message for those gathered at the Buncombe County GOP’s annual Lincoln-Reagan Dinner on April 8: “God is not dead. He’s not even sick. And he will not only restore us to former splendors, but he will give us a new birth of freedom if we will return fully to him.”

The executive director of the Christian Action League was among a handful of speakers at the event, which also featured Lt. Gov. Dan Forest. The two men’s speeches called on members of the audience to uphold Judeo-Christian values and work to preserve the culture that is at risk of slipping away.

“It is alarming to witness to what degree Americans have been casting off the religious moorings which tie us to the blessings of liberty,” Dr. Creech warned. He opened his talk by relating the story of a missionary who encountered a sun-worshipping tribal chief whose people had become alarmed by a solar eclipse, believing God had died.

“It is a bad thing for a country when God dies – when God fades out – when he is but largely just a memory – when his person, his moral law, his mercies, his grace, his power, his authority – doesn’t seem to matter anymore – when he is no longer a vital part of the equation but just a vague shadow of an afterglow – when his name is bandied about ceremoniously but with no real substance of devotion – when it seems he is only a part of the glorious past but now in total eclipse,” Creech said. He went on to  explain the connection between Christianity and liberty and said that the many troubles that we now see in our nation make it clearer day by day “what a profoundly spiritual thing freedom is – the way its deeply rooted in our relationship to God.”

Because so many in our nation have determined to live as if they have no need of God, Creech said we are now enduring a time of great testing, “a dark period when so much of what we value is under assault and threatened to be lost.”

Returning to his story of the tribe and the sun, he said, “One thing about an eclipse, its light will return. But in our case, we must make the choice.”

Keynote speaker Dan Forest, North Carolina’s lieutenant governor since 2013, had a similar message for those at the Buncombe County event, challenging them to the Biblical call to be salt and light in a culture that has become increasingly politicized.

“Today we demand political solutions for things that used to be values-driven,” Forest said. “A lot of issues can be solved without politics.”

He said that sadly too many people have rejected Judeo-Christian and western-civilization values and have instead made politics their religion, relying on an ever-growing government and sacrificing liberty in the process.

Rather than putting “policy band-aids on top of policy band-aids,” for problems such as hunger, crime, overpopulation of prisons and recidivism, he said conservatives must work to address the heart of the issue.

Forest said John Winthrop’s 1630 “City Upon a Hill” sermon that echoed Jesus’ characterization of his followers as “the salt of the earth and the light of the world” was a call to individuals, not nations or cities or governments.

“Light doesn’t shine in the darkness; light eliminates the darkness,” Forest said. “We are called to be that shining city on the hill.”

Buncombe County Republicans also heard from Chad Connelly, founder of Faith Wins, a 501(c)3 that seeks to engage Christians in the public arena; and from Caleb Burnette, a high school senior and winner of the BCGOP’s recent essay contest.

The Lincoln-Reagan dinner was hosted by the group’s chairman Carl Mumpower, who said it honored two men who were not perfect, but who reached for truth, courage and love.

“Tonight we have affirmed their mission and re-embraced it as our own,” Mumpower said.