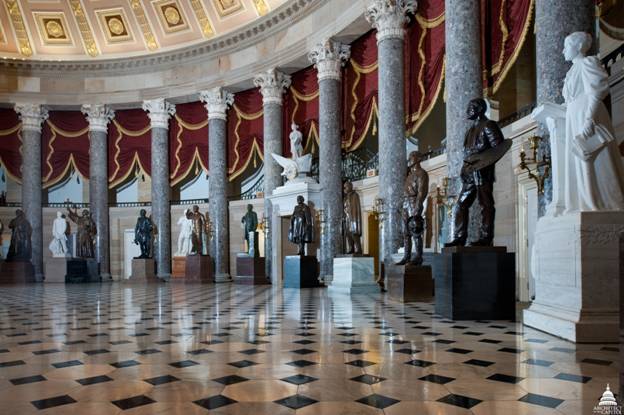 RALEIGH – Thursday, N.C. House Speaker Tim Moore (R-Cleveland) named three members of the Statuary Hall Selection Committee who will oversee the placement of a sculpture of the late Rev. Billy Graham in the U.S. Capitol Building.

Sen. Phil Berger (R-Rockingham), pro-tempore of the N.C. Senate, appointed four members back in May of this year.

These appointments now complete the seven-member committee, which will pick a sculptor and secure funds for the project.

In 2015, the North Carolina General Assembly passed legislation for a statue of Rev. Graham to replace that of former Gov. Charles B. Aycock currently in Statuary Hall.

Two statues of prominent individuals represent each state in the U.S. Capitol. A statue of former Gov. Zebulon Vance, along with Aycock’s statue, currently stands for North Carolina.

Dr. Mark Creech, executive director of the Christian Action League, said the League supported and lobbied for the measure that made the statue possible.

Creech recalled, “The Senate passed the initiative unanimously, but it wasn’t without controversy in the House. Democrats charged Republicans were circumventing the normal process for vetting legislation by not giving the bill a hearing in committee. Republicans, however, argued the real issue wasn’t the process but that Democrats didn’t want Graham as the one to replace Aycock.”

Some of the alternative names mentioned by Democrats during the angry debate on the House floor were furniture maker Thomas Day, U.S. Army Gen. William C. Lee, UNC basketball coach Dean Smith, former Governors Jim Holshouser, Jim Hunt, and Terry Sanford. Rep. Marvin Lucas (D-Cumberland) argued that he had concerns about the “separation of church and state” and whether Graham as a religious figure was a proper candidate. Rep. Mickey Michaux (D-Durham) introduced an amendment that would have replaced Graham with civil rights leader, Julius Chambers. But Speaker Tim Moore (R-Cleveland) ruled Micheux’s amendment was “not germane to the bill,” and out of order.

“Back in 2015, I felt the complaint by House Democrats about the process was a smoke-screen for either one of two real motives: either the opposition had an animus to the Religious Right with which Graham, and more specifically his son, Franklin, were associated or opponents suffered from common misconceptions about ‘separation of church and state,’” said Creech.

“I can think of no one, absolutely no one, from our state who had a greater impact for good, not simply on our nation but globally, than Billy Graham. He was on the top ten lists of the most admired persons for several decades. He provided spiritual counsel to Presidents since the days of Harry Truman. His crusades over 50 years changed the lives of millions internationally. In my estimation, it’s difficult to understand how the choice to replace Aycock with Graham would have ever been opposed,” Creech added.

Speaker Moore noted in his press release: “The spiritual guidance of Rev. Billy Graham lives on in the hearts of North Carolinians after his passing. Placing a monument of Rev. Graham in the U.S. Capitol will serve as solemn memorial to his lasting impact on the faith of millions in our state and around the world.”

Former Governor Pat McCrory (R) signed the legislation authorizing the statue. In February of this year, Graham’s death at the age of 99 prompted Lt. Gov. Dan Forest (R) and Gov. Roy Cooper (D) to ask Congress to grant the state’s request for Graham’s statue to replace the one of Aycock’s.

The Statuary Hall Selection Committee is expected to meet and begin its work this Fall.