You are here: Home / Christian Action League / Public Will Get Chance to Speak about Fate of Confederate Monuments 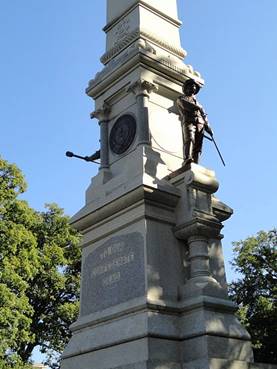 North Carolinians will get a chance to speak out about the fate of three Confederate monuments currently located on the Capitol grounds in Raleigh, but targeted by the governor for removal.

Although a hearing date has not been set, a five-member ad hoc committee chosen by the North Carolina Historical Commission to address the issue met Jan. 22 via conference call and announced its intent to hear from the public after first soliciting input from history experts, the UNC School of Government and faculty members at the state’s six law schools.

Already, a website portal is available for the public to submit comments and an address is provided for responses via traditional U.S. mail.

Early last September, Gov. Roy Cooper’s administration petitioned the Historical Commission to move the Henry Lawson Wyatt Memorial, the Monument to the North Carolina Women of the Confederacy and the 1895 Confederate Soldiers Monument to the Bentonville Battlefield, located in Johnston County, about 45 miles from the Capitol. The Commission met two weeks later, but postponed a vote on the matter, instead opting to name a study committee.

The decision on whether to relocate the monuments rests with the Historical Commission following the General Assembly’s passage of Senate Bill 22 in 2015, which states that, “a monument, memorial, or work of art owned by the State may not be removed, relocated, or altered in any way without the approval of the North Carolina Historical Commission.”

Whether the Bentonville Battlefield, site of the last battle between the armies of Union Maj. Gen. William Tecumseh Sherman and Confederate Gen. Joseph E. Johnston, would qualify is debatable and could easily land the issue in court should the Commission approve the move.

The Rev. Mark Creech, executive director of the Christian Action League, has followed the controversy over the Civil War monuments from the get-go and questions the motives behind the push to take them down.

“I fly no Confederate flag at my house, nor would I do so. As a Christ-follower, I feel no compulsion to zealously defend a Confederate Memorial, even though I would prefer to see them stay. Furthermore, I have spent my 38 years of ministry repudiating racism. But it’s the motives behind the removal of these monuments that are of great concern to me,” said Dr. Creech.

“Governor Cooper, during his entire political career has never given a flip about these monuments, not mouthing the first objection, until he saw a political opportunity to capitalize on the energy and resources of the far left,” he added. “You can count on Cooper and his ilk to use this issue to make every lawmaker that doesn’t support repealing SB 22 look like a racist or bigot.”

Controversy over Confederate monuments across the nation came to a head following a deadly protest in Charlottesville, Va., last August. A “Unite the Right” rally staged to protest plans to remove a statue were met by counter-protesters. Clashes broke out between the groups and a woman was killed when a driver sped through the crowd.

Virginia has more Confederate monuments than any other state in the country, and in the aftermath of the violence, bills that would allow municipalities to remove them have been introduced in the Virginia House of Delegates. But as of this week, all were voted down by subcommittees.

Democrat Steve Heretick of Portsmouth, Va., one of the lawmakers who opposed the most recent bill, told the media he understands Confederate statues are a “highly charged issue,” but that allowing cities to purge them is not the answer.

“I don’t think that moving or tearing down statues or trying to cover up the vestiges of that history, good or bad, helps us carry forward what we’re here to do,” Heretick said.

Creech said he was concerned with the caliber of people leading the campaign to erase Confederate history from the landscape.

“The movement’s associations include people that advocate for lawlessness and anarchy. I feel quite certain it’s not just statues that these activists want to replace; it’s a government that preserves the virtues of liberty and free speech. This is what tyrants do. This is what terrorists do,” he said. “Today it’s Robert E. Lee, Stonewall Jackson, tomorrow it’s Washington, Jefferson, and ultimately the Constitution.”

Creech said he agrees with a 2010 op-ed from Russell Moore, who is now president of the Ethics & Religious Liberty Commission of the Southern Baptist Convention.

In reference to a reader’s question as to whether it was wrong to display a picture of Robert E. Lee, Moore wrote, in part, “None of us is free from a sketchy background, and none of our backgrounds are wholly evil. The blood of Jesus has ransomed us all ‘from the futile ways inherited from your forefathers’ (1 Pet. 1:18), whether your forefathers were Yankees, Rebels, Vikings, or whatever. The gospel also then frees us to give honor to whom honor is due (Rom. 13:7), without the pretense that any human being is without sin or dishonor.”

Creech said that includes Henry Lawson Wyatt, the first Confederate soldier from the Tar Heel state to be killed in action, as well as all the soldiers honored by the 1895 monument and the women who supported the cause of the Confederacy.

To share your view on whether North Carolina should remove the three Confederate statues from the Capitol Grounds, visit the website link to the Historical Commission’s Study Committee on the Relocation of Monuments and stay tuned for an announcement about a public hearing expected to be scheduled between now and April. You may listen to a recording of the committee’s Jan. 22 meeting here.