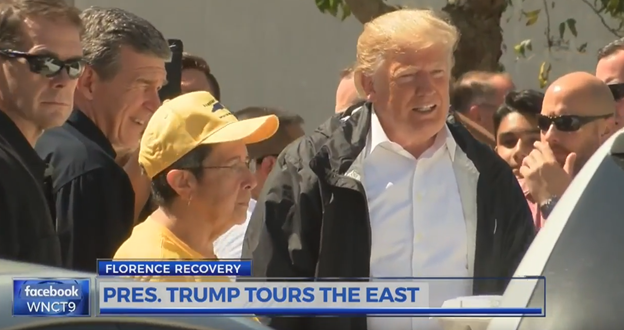 NEW BERN – Tuesday, President Donald Trump posted to his Twitter account that Hurricane Florence had been “a tough hurricane.” He said it was “[o]ne of the wettest we’ve ever seen from the standpoint of water.”

“Florence has been a nasty one,” added the President, “A big one like that area certainly has never seen before.”

On Wednesday, President Trump boarded Air Force One and came to North Carolina to survey the devastation first hand. With him for the trip were North Carolina’s two U.S. Senators, Thom Tillis, and Richard Burr.

During the briefing, Gov. Cooper told the President that progress had been made, but many in the state were still in danger, and federal funding would be necessary for relief efforts. The President responded by pledging the federal government would leave nothing undone. “You will have everything you need,” promised the President.

After the briefing, the President and Gov. Cooper made a quick stop at Temple Baptist Church in New Bern where Baptist On Mission (Baptist Men, North Carolina Baptist Disaster Relief) were serving that community with more than 20,000 meals a day. The President pitched in himself by handing out free Styrofoam plates of hot dinners to people in cars, while also offering words of comfort and encouragement.

Craven County was hit hard by Hurricane Florence. The storm negatively impacted more than 4,000 homes and 300 businesses. The downtown section of New Bern was decimated. It could be months before the community can recover.

The President was in New Bern for about twenty minutes before departing via his motorcade to drive through storm-damaged neighborhoods, and then onto to visit other areas struggling in the Palmetto state, South Carolina.

The same morning of the President’s visit, U.S. Rep. Mark Walker of High Point, spoke with Bill Hemmer on Fox’s America’s Newsroom about some of the relief efforts going on across the state.

Hemmer asked Walker if he thought FEMA was responding sufficiently to the aftermath of the storm. Walker said he was satisfied with FEMA’s response at this point.

Walker said the situation reminded him of when a tornado touched down in Moore, Oklahoma, about five years ago. He said at that time journalists Harry Smith, and Brian Williams said that if the people of Oklahoma were waiting for federal assistance they might be waiting for several days, but the Baptist Men were already there.

Walker added, “The Red Cross, the Baptist Men, neighbor helping neighbor, from the coast to the mountains, North Carolina has this spirit, this attitude, we want the federal government to come in, we need the federal government, but hey fellows, we’re not waiting for you. We’re going to get this job done now. We’ve seen that kind of spirit throughout North Carolina, on the state and local level.” 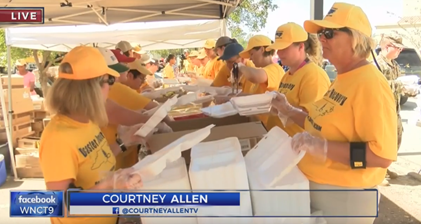 According to the website of Baptists on Mission, North Carolina Baptist Men (NCBM) and their disaster relief units are providing hot meals for tens of thousands daily in Wilmington, Washington, and New Bern. They are also joined by Baptist Disaster Relief units from Kentucky, Tennessee, Florida, and Mississippi that are serving in other North Carolina cities and towns.

NCBM says they are going to need hundreds of disaster recovery volunteers for many weeks to come. Volunteers are not only involved in providing meals, but also clean-up efforts that require removing mud from people’s homes, tearing out damaged walls, and using chainsaws to get rid of fallen trees, etc.

Samaritan’s Purse staff and disaster relief units are also on the scene across Eastern North Carolina and have been since Saturday of last week when torrential rains poured onto already devastated communities, says its President, Franklin Graham.

Graham said in a mass email from the organization, “Many homeowners along the North Carolina coast are facing devastating losses, and they need our help. Most importantly, they need to know that God loves them and hasn’t forgotten them. Every time I go out to a wrecked home where our volunteers are helping begin the recovery process, I am privileged to see God’s love shared and human dignity affirmed, often through tears, smiles, and sweaty hugs among hardworking people from all over the country.”

The Billy Graham Rapid Response Team chaplains are also working alongside volunteers from Samaritan’s Purse, bringing the hope of the Gospel to troubled minds and hearts.

Forest said the most important work that’s being done is not just helping someone clean-out their home where flood waters have invaded, but its helping people spiritually and emotionally.

“You are introducing people to a relationship with the Lord and giving them hope for eternity, not just hope for their house to be rebuilt,” Forest said.

These groups, as well as other ministries, are looking for additional volunteers.

To see if you might help in some manner, check out these links:

Volunteer with Baptists on Missions: https://baptistsonmission.org/Mission-Projects/By-Mission-Type/Disaster-Relief/Hurricane-Florence/Get-Involved

Please remember to pray for President Trump, North Carolina’s Governor and Lieutenant Governor, public officials both state and local, the many faithful ministries helping those in need like Baptists on Mission and Samaritan’s Purse, and the hundreds of thousands of people suffering in the aftermath of Hurricane Florence. Moreover, pray that through these difficult circumstances many would come to know Christ as their Savior.