You are here: Home / Alcohol / Opening Days of the ‘Short Session’ include Teacher Protest, ‘In God We Trust,’ Gambling, Alcohol Reform, and School Safety 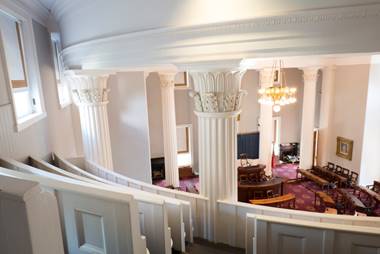 RALEIGH – North Carolina lawmakers returned to Raleigh on Wednesday for the end of the 2017-2018 Legislative Biennium. Commonly referred to as the “short session,” legislators between May and the middle of July spend most of their time making adjustments to the state’s budget.

This year’s opening day was possibly one the most eventful in the state’s history. Anywhere from 15,000 to 20,000 teachers from across the state marched on the Legislative Building to protest for higher salaries and more education funding. The protest, which was called a “March for Students” and “Rally for Respect” forced the closing of at least 40 School Districts.

But legislative leadership contends that since the Republicans have been in the majority, education has been more of a priority than when under the previous Democratic leadership.

Joseph Kyzer, a spokesman for House Speaker Tim Moore, told NBC News that the state is now climbing up the rankings because Republican leaders have provided five consecutive teacher pay raises since 2014.

“Our state dropped in these rankings due to the poor management of the state’s finances by our Democrat predecessors – teacher pay was cut, teachers were furloughed, and the salary schedule was frozen under Democrat control. But the state is back on track today with the fastest rising teacher pay in the country under Republican leadership,” said Kyzer.

Others claim that the NCAE and the National Education Association (NEA) have always overwhelmingly supported Democratic candidates. Since Republicans have ascended in power in recent years, these educators feel that their influence has waned. Drawing inspiration from protests held in Arizona, Oklahoma, and West Virginia, they hope to energize and mobilize their membership for the 2020 elections.

NCAE President Mark Jewell told WRAL, “We don’t anticipate much change from this group. So, we’re going to change the players in the game.”

Dr. Mark Creech, executive director of the Christian Action League, provided his own assessment, saying, “I don’t believe most of the teachers that came to Raleigh were part of some political objective to remove Republicans. I think many of them, if not most, are really more concerned for their students than they are their salaries. But they are earnest about the need for additional funding to be effective at what they love – teaching. What may not be so apparent to the teachers,” he added, “is the way they are being pimped out by political operatives who are unfairly misrepresenting the current leadership and their genuine commitment to make education a priority. Bold steps are being taken for education, but everything can’t be done right away. It just can’t!”

Other Matters Straight Out of the Chute

Other matters straight out of the chute were items many concerned citizen Christians will find of significance. During the first couple of days, lawmakers filed the following measures:

In God We Trust

HB 965 – National and State Mottos in Schools Act is a measure that would “require the display of the national motto, ‘In God We Trust’ and the state motto, ‘To Be Rather Than to Seem,’ in at least one prominent location of each school, such as an entryway, cafeteria, or other common area.” As expected, the American Civil Liberties Union” has already stated their opposition to the bill. Similar legislation recently passed in both Louisiana and Tennessee. “In God We Trust” was adopted by Congress as the National Motto in 1956.

The sponsors of HB 965, Representatives Bert Jones, Linda Johnson, Dean Arp, and Philip Shephard, all Republicans, have also filed HB 964 – National/State Mottos Plate, which would provide for a new specialty license plate with both the National and State Mottos on it. All proceeds from the plate would be distributed to the Soldiers and Airmen Assistance Fund, a non-profit group that provides assistance to the members of the North Carolina National Guard and their families coping with unusual or unpreventable hardships.

The Christian Action League has always been an ardent supporter of such legislation.

HB 952 – Lottery – JLOC Recommendations is a measure that reflects the findings and recommendations of the Joint Legislative Oversight Commission. It calls for a doubling of money spent for advertising the lottery from 1% to 2%. This would raise the lottery’s advertising budget from its current level of around $20 million annually to $40 million. A companion bill SB 716 has also been filed in the Senate.

The Christian Action maintains its position from the day that North Carolina’s so-called Education Lottery was enacted – State-operated lotteries are a public-policy failure and cannot be defended ethically. For the state to continue, even double-down in its support for the lottery, is both unwise and unethical.

Earlier this year [March], the Christian Action League reported on the NC House’s formation of the House Select Committee on School Safety. The bipartisan committee has met twice, heard from the public, and received numerous recommendations that lawmakers can be expected to act on this session.

In an interview with WBTV [Charlotte] that took place on the opening day of the “Short Session,” Representatives David Lewis and John Torbett, who chair the committee, said that school safety budget priorities would include: (1) $5 million for a School Safety App, (2) $12 million for a School Resources Officers grant program, (3) $4 million for School Facility Improvements, and, (4) Funding for Nurses, Psychologists, Counselors, and Social Workers.

HB 944 – ABC Regulation and Reform is a bill meant to strengthen the permitting enforcement authority of the ABC Commission, while making a few other changes to ABC Laws, as recommended by the Joint Legislative Oversight Commission on Justice and Public Safety. It raises the fines for the violation of certain ABC laws. It raises the age requirement from 21-25 for a person to hold an ABC permit. These are good provisions.

The Christian Action League, however, is still studying the remainder of the measure for possible negative impacts.

Dr. Creech said that it’s critical this year that citizen Christians be engaged in the legislative process. There are fundamentally three ways to do this:

To make a secure contribution online, click on the blue donate rectangle below.

You can also send your gift by mail to:

Please forward this information along to others on your email list or social media pages.