You are here: Home / Christian Action League / North Carolina Students Protest for Gun Control, While Others Reject that as a Solution and Call for a Spiritual Response 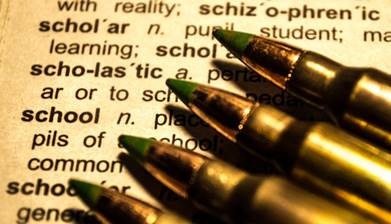 RALEIGH – Thousands of students in North Carolina walked out of their classrooms on Wednesday in honor of the 17 victims of a high school shooting in Parkland, Florida, last month. The students were also protesting school gun violence as part of a national movement that urges the United States Congress, as well as state lawmakers to take action to make schools safer.

According to the Raleigh News and Observer (N&O), Whinter Collin, a senior and organizer of the protests at Apex Friendship High School said, “It’s up to governments, primarily the North Carolina government, to change something so this will never happen again.”

The N&O also reports that Democratic legislators, State Senator Mike Woodard and Rep. Marcia Morey participated in the protest of the students at Northern High School in Durham. Woodard led the students in a chant of “Not One More!,” while Morey called for stricter gun laws.

The primary theme of the protests were advocating for stricter gun control laws. But some smaller groups that participated in various protests rejected that demand as a viable solution.

Adam Cascone, also a senior at Apex Friendship said, “I don’t see a problem with guns, I see a problem with people,” reported the N&O. Other students, said the N&O, showed their support for gun rights by holding signs that read, “Don’t tread on me.”

One North Carolina student chose not to participate at his school and gave his reason for not doing so in a Facebook post. Connor Groce, a student who goes to West Forsyth High School and lives in Clemmons, raised a number of compelling questions. He wrote:

“I am a high school student who also happens to be a Christian and a conservative. Why are teachers forbidden from praying, but free to lead their class in protest for the advancement of a political agenda? Why are Christian students discouraged from praying at the flagpole before school, but students are free to storm out of the middle of class when it is in support of a ‘Progressive’ agenda? Today at 10:00 a.m., I will remain at my seat in class amongst others who walk-out. I will spend the 17 minutes in prayer for the families of the victims of senseless violence and for our nation as a whole.”

Although not based in North Carolina, students at Catholic High Schools in Denver, Colorado, also left class on Wednesday, but not to protest. Instead, they dropped to their knees in prayer on their schoolhouse lawns and held 17-minute prayer services in lieu of a 17-minute walk-out protest.

The Dailywire reports that Superintendent of Denver’s Catholic Schools, Elias Moo said, “We believe the first and most important response can and should be to unite in prayer. At the core of what our country is confronted with today is a great spiritual battle, a battle for the soul of our society and nation.”

Father McLagan of Holy Family High School, one of the schools that participated in the Catholic prayer event in Denver, said that at the heart of the problem is our nation’s lack of respect for human life. The Dailywire reported, “‘Our dignity contains such a reality to it that we need to learn how to forgive, we need to learn how to grow in holiness and learn that our salvation doesn’t come from policy but from the Lord,’” said Father McLagan. “‘A policy is only as good as the virtues in the people. If you don’t have a virtuous people, what expects your policy to be virtuous? It starts with being on our knees and then going into action, not acting without going to our knees,’” he said.

Governor Roy Cooper was quick to capitalize on the student protests Wednesday, calling for a state ban on bump stocks, raising the minimum age for buying certain firearms, and requiring a purchase permit for assault rifles and handguns.

Last month, NC House Speaker Tim Moore, announced that he was forming a new school safety committee that would be tasked with examining safety standards and procedures throughout the state’s elementary, middle, and high schools. Moore said the committee would consult with local governments, school systems and policy experts in a range of fields to address violence prevention, emergency management, and security in North Carolina classrooms.

“I certainly support the right of students to protest,” said Dr. Mark Creech, executive director of the Christian Action League, “but I fear that so many of these students, in fact, I dare say most of them, are being used by Leftists on this extremely complicated and delicate issue to push for the most radical means of gun control.”

“This is the way progressive groups work on a host of issues. They push lawmakers to act out of pressures not based in good common sense but raw emotion, and they’ll even use our children to do it. Moreover, liberals always look to other causes outside of man – everything outside of human responsibility – believing that if we can just change man’s environment then people will behave and live right. It’s a terrible fallacy,” said Dr. Creech. “The killing of our children in the schools isn’t a reflection of our need for gun control. It’s not reflective of an immoral White House as one of the students claimed at a protest in Washington. It’s reflective of the loss of our national soul. It’s reflective of the need of a great spiritual awakening. We have become a dark and murderous people – something that will only change when we turn back to the light and love our neighbor who is also made in the image of God.”

April 20th marks the anniversary of the Columbine High School shooting in 1999 and more student protests are expected on that day.