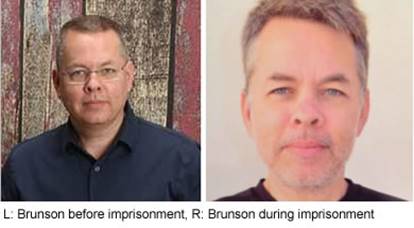 A pastor from Black Mountain, North Carolina, who has been imprisoned in Turkey for almost a year and a half, has been indicted with a charge that could result in a life sentence.

Andrew Brunson, a Presbyterian pastor, served the people of Turkey for more than 20 years as a missionary in the city of Izmir. According to the United States Commission on International Religious Freedom (USCIRF), Brunson was detained on October 7, 2016, and accused by Turkish officials of having ties to an American-based cleric, Fetullah Gulen, who allegedly made a coup attempt against the Turkish government in July of 2016.

The USCIRF says it “strongly condemns” the indictment against Brunson.

Jordan Sekulow, executive director of the American Center for Law and Justice (ACLJ), a Christian organization that is representing Brunson’s family, has said the government of Turkey, which is led by an Islamic-based party, has exercised increased crack-downs on Christians. The ACLJ says “the indictment against Pastor Andrew is a 62-page document which claims that his crime is ‘Christianization’ acting as ‘an agent of unconventional warfare’ under the ‘mask of an evangelical church pastor.’”

From his prison cell in Turkey, Brunson has written, “Let it be clear, I am in prison, not for anything that I have done wrong, but because of who I am – a Christian pastor. I desperately miss my wife and children. Yet, I believe this to be true – it is an honor to suffer for Jesus Christ, as many have before me. My deepest thanks to all those around the world who are standing with and praying for me.”

Numerous appeals have been made for Brunson’s release.

This month, Brunson’s daughter, Jacqueline, addressed the Human Rights Council in Geneva, arguing the allegations against her father were “absurd.” She said she visited her father last August in prison and they sobbed the whole time they were together. She said Turkey should not be allowed to get away with holding her father even one more day. She asked the Council to “make any and all efforts” to secure her father’s release.

The letter states: “The United States and Turkey have benefited from a close partnership for decades, and we hope to be in a position to continue strengthening these ties. Now is the time for our countries to reaffirm respect for fundamental freedoms and the rule of law while reasserting our shared commitment to addressing security challenges through partnerships and cooperation. In this spirit of partnership, we respectfully ask you to consider Mr. Brunson’s case and how the recent treatment of Mr. Brunson places significant strain not only on him and his family, but also on the robust bilateral relationship between the United States and Turkey.”

According to CNN, President Trump has raised the issue of Brunson’s unjust imprisonment with the Turkish President three times during his visit to Washington last year. It was the first time the two had met since Trump took office. In exchange, President Erdogan wants the extradition of the Islamic preacher, Fetullah Gulen, from the U.S. to Turkey.

Vice President Pence has also stated that he has a “deep interest” in the case and has discussed the matter with senior Turkish officials.

“Pastor Brunson is strengthened by his love for his family and his faith in God, but his health has deteriorated. He has lost 50 pounds and spends 24 hours a day in a cell with limited human contact.  He is attempting to visit a doctor this week, which involves him being handcuffed and transported with several armed guards. He fears the possibility that the American government accepts the indictment and forgets about him, which we will not allow to happen.


“There should be no mistake that Pastor Brunson is the victim of false accusations, and we call upon the Turkish authorities to honestly and transparently review his indictment. Pastor Brunson is being used as a political pawn by some elements of the Turkish government. These elements seek to undercut the longstanding partnership between the United States and Turkey, in which our two nations have enjoyed close diplomatic, economic, and military ties. It is vital that our nations continue this partnership and continue to work together to pursue our common interests.

“I would also note the continued detention of multiple other U.S. citizens, as well as several Turkish staff of the U.S. Diplomatic Mission, on scant evidence under the state of emergency, which continues to undermine the partnership between our two countries. It is time for Pastor Brunson and these individuals to be reunited with their families. We look forward to Pastor Brunson’s return home to America.”

Dr. Mark Creech, executive director of the Christian Action League, said he especially appreciates Sen. Thom Tillis for his extra efforts to get Brunson released. “I’ve known Sen. Tillis for a number of years and can tell you that he’s always been concerned with what’s on the heart of evangelicals. I love the man and consider him a friend,” said Creech. Creech added that other public officials from North Carolina and other states, as well as the ACLJ and the USCIRF also deserve many thanks for what they’re earnestly doing to resolves this situation.

“But I believe even the best of these efforts are likely to fail without earnest prayer for Brunson’s release,” said Creech, “I want to ask every Christian who is a part of the network of the Christian Action League, every born-again believer from North Carolina that reads about this case, to commit to praying regularly for Brunson and his family. Moreover, let’s not forget that God is allowing this for some reason pertaining to the spread of the Gospel. Let’s pray God’s purposes in this regard are also accomplished. The land of Turkey needs Christ. Although religious liberty has made some ground there, it’s largely suppressed.”

Brunson’s trial date has been set for April 16th.

The Christian Action League will seek to keep its readers informed about this ongoing case.