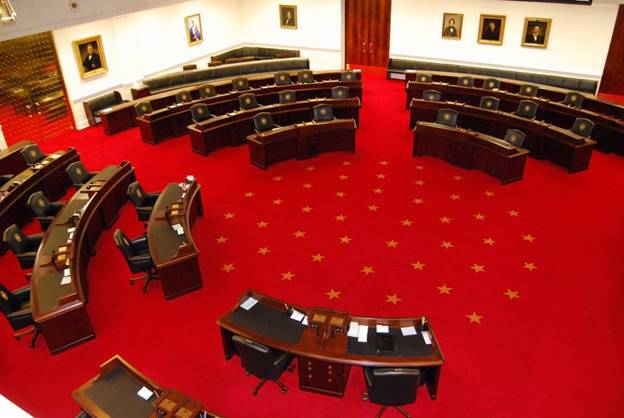 Farewell speeches can be extraordinary moments for public servants leaving office. In a farewell address, the person giving it usually speaks about something closest to his or her heart.

George Washington warned about the dangers of partisan politics in his farewell address. Dwight D. Eisenhower expressed his concern with the military-industrial complex. And who can forget General Douglas MacArthur’s farewell, saying, “old soldiers never die, they just fade away,” and “duty, honor, and country”?

The day before the North Carolina General Assembly adjourned last month, lawmakers who had either decided not to run again or had failed to win re-election were formally saying goodbye to their colleagues on their respective chamber’s floor. Among the many speeches given, one stood out and proved extraordinary.

Senator Tommy Tucker (R-Union) rose to speak and the President of the Senate, Lieutenant Governor Dan Forest, recognized him for “a moment of personal privilege.”

Tucker said that he had not prepared his remarks and would be extemporaneous.

He began by acknowledging his affection for his fellow Senators. He named several of them, referring to a few humorous experiences with certain ones, which drew hearty laughter. He said, “We have laughed and argued and gotten mad with each other. But this is an exclusive club – exclusive in that we represent North Carolina. And it is truly an honor and a privilege to have served with you. I care deeply about all of you. I owe a lot to a lot of people.”

The sincerity of his words was most evident from his struggle to keep his emotions in check. At times, the burly Tucker, well-known for his blustery manner, choked back the tears, especially as he described his past as a youth.

He said that he never dreamed he would come so far in life. His “Granny,” as he affectionately referred to her, used to call him a “roughian.”

“I had to go off to military school after my parents died,” he lamented. But before their death, he said, “My mother used to march me off to Sunday School every Sunday. So I got the foundation under me.”

Here’s most of the rest of what Tucker said. I’ve edited it a little for clarity and brevity, but the substance remains unchanged.

“There are some things that I see that I wish I could change. When I make these statements, I don’t mean to elicit any argument. It’s just my opinion, and I don’t mean to offend anyone at all.

“When I went to school, public school, we used to have a Bible verse and say the pledge of allegiance. And we have done everything we can it seems in our country to eliminate God from everything – because we will offend somebody. I can tell you that I wouldn’t be standing here, the people in Union County wouldn’t have voted for me, I wouldn’t even be alive if Jesus hadn’t gotten a hold of me. But he did.

“This country was founded on Christian principles, and I believe that. If you know history, you can’t deny it. So I stand before you a sinner saved by grace.

“The other thing I see wrong with this country is with men. Fathers who impregnate women and leave those women to take care of those children and some of them become wards of the state. We have over 11,000 children (North Carolina) in the foster care system. Something is wrong!

“Churches need to take their Family Life Centers that sit with air conditioning and heat all week with nobody in them and put homeless folks in them. We need to get our hands dirty for the poor, instead of sending our tithe checks or money off for taxes so somebody else on a state level can do it. I’ve seen it from HHS, you can throw all the money in the world at it, and you’re not going to fix the fact that we don’t have fathers at home – that their children don’t have love…

“I also see…and I also understand it’s the law of the land…But I do know that since 1973, we have removed 55 million children from the safest place in the world, which should be their mother’s womb. We have removed them, and I think to myself, did we abort the next Booker T. Washington, the next Martin Luther King, the next Malcolm X, the next John Kennedy, the next President, the one that God had a plan for that child to have cured cancer. I can tell you today; we have no regard for life or death in this country in a lot of ways.

“Something that I didn’t know until I heard a sermon on Father’s Day – 26 out of the 28 mass shooters were from fatherless homes.

“So men, if you are listening, wherever you are in this country, you need to stand up (unlike my father) and take care of your youngins and be there for them and love them, and we can change it – one life at a time.

Senate members, legislative staff, and people in the gallery were fixed on Tucker with a gaze. Men and women alike were wiping their eyes with handkerchiefs and Kleenexes. There was something divine in his words, and I believe everyone recognized it. His speech garnered a prolonged standing ovation.

I’ve been a lobbyist in the North Carolina General Assembly for nearly 19 years, and it was one of the most powerful moments I’ve ever witnessed on the House or Senate floor.

It’s disconcerting we haven’t even heard a peep from the press about Tucker’s extraordinary speech.

In his earlier remarks, the Senator also said he was leaving after eight years because of his strong belief in term limits. I have never taken a position on term limits. Still, I can’t help thinking Tucker himself, might be the strongest argument against it. In these perilous times of confusion, even despair, our state, and nation dreadfully needs strong men and women of Christian conviction. If America is to be great again, they must fill the halls of power. Their influence must become enduring and pervasive.

So may God give us thousands of Tommy Tuckers to serve in public life. May his tribe ever increase!

O Lord God, be gracious to us. Forgive us of our many sins. Do not punish us according to our works. And hasten the day when godly leaders abound! For Christ’s sake, Amen.