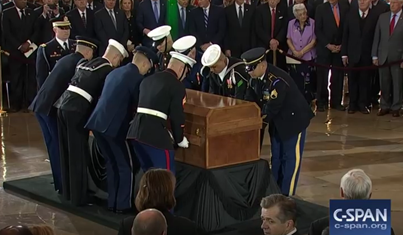 WASHINGTON, D.C. – Native North Carolinian, Billy Graham, was given the rare tribute of lying in honor in the Rotunda of the U.S. Capitol Building on Wednesday.

Graham, who preached the Gospel of Jesus Christ to millions around the globe, counseled US Presidents, authored 33 books, received the Congressional Gold Medal, and was regularly listed as one of the ten most admired men in the world, died February 21st at the age of 99.

Billy Graham is the first religious leader to lie in honor in the Rotunda. The world-renowned evangelist shares this distinction with 11 presidents and only three other private citizens in the nation’s history.

His simple pine casket was placed under the eye of the Capitol dome by military pallbearers and rested on a black-draped catafalque. Family members, friends, and the nation’s lawmakers surrounded it in somber silence. Senate Leader Mitch McConnell, House Speaker Paul Ryan, and President Donald Trump spoke in memorial. Afterward, three wreaths were laid representing the House, Senate, and Executive branch of the federal government.

Senator McConnell said, “The man we recognize today shared the gospel with more people face to face than anyone else in history. His clear voice thundered through packed tents, stadiums, auditoriums, parks and plazas the world over.”

McConnell also said that Graham displayed a characteristic humility and would contend his successes were not man-made. The secret of his work was God and Graham would often say, “I would be nothing without him.”

House Speaker Ryan said Graham would wake up every day and follow Christ’s command to “Love the Lord God with all your heart, all your soul, and all your mind.” He said the evangelist’s love was infectious. He turned people to “the glory of God,” while admonishing them to “look to the Bible” for life’s answers.  “Here lies America’s pastor,” concluded Ryan. “A man made great not by who he was, but by who he served with all of his heart, all of his soul, and all of his mind.”

President Trump said the conception of Graham’s ministry began with a prayer meeting of Charlotte businessmen on the Graham family farm more than 80 years ago. Graham was just a teenager at the time and hadn’t surrendered his life to Christ. He said participants earnestly prayed that day for God to “raise-up someone to preach the Gospel to the ends of the earth.” He said God answered that prayer in Billy Graham.

Drawing attention to a painting in the Rotunda of the Pilgrims clutching a Bible and praying, President Trump reminded Americans that America “is sustained by prayer.”

Pointing to the many statues throughout Statuary Hall, the President said, “Around us stand the statues of heroes who led the nation in prayer during the great and difficult times, from Washington to Lincoln to Eisenhower to King. And today, in the center of this great chamber lies the legendary Billy Graham, an Ambassador for Christ, who reminded the world of the power of prayer and the gift of God’s grace.”

In a unanimous vote by both the state House and Senate in 2013, Graham was declared to be “North Carolina’s Favorite Son.”

“It was the first resolution of its kind in our state,” said Dr. Creech. “The legislation also recognized the preacher’s late wife, Ruth Bell Graham, for her partnership in her husband’s ministry.”

Two of Graham’s children, Franklin Graham and Anne Graham Lotz, were in attendance for the final passage of that legislation. The declaration was later personally delivered to Graham by Governor Pat McCrory.

In 2015, the North Carolina General Assembly also passed legislation to place a statue of Billy Graham, after his death, inside the U.S. Capitol Building in Washington.

The legislation was proposed in response to controversy concerning former Governor Charles B. Aycock.

Aycock’s statue, along with a statue of Zebulon Vance, a Civil War-era Governor, currently resides in Statuary Hall representing the Tar Heel state.

Aycock’s legacy came under fire for his white supremacists views, resulting in the removal of his name from some college dormitories in the state, as well as from an annual state Democratic fundraising event. The legislation state lawmakers passed authorized supplanting the Aycock statue with one of Billy Graham.

Roy Graham, son of Franklin Graham, CEO of the Billy Graham Evangelistic Association, was in attendance for the passage of this measure.

This week, Governor Roy Cooper and Lieutenant Governor Dan Forest took further steps to place the statue of Billy Graham in in the Capitol.

Governor Roy Cooper sent a letter to the Joint Committee of the Library of Congress requesting approval of the state’s request to replace Aycock’s statue with one of Billy Graham. Lieutenant Governor Dan Forrest submitted a formal request for the same to the Architect of the Capitol.

The next step is for the Joint Committee on Library Action to approve or deny the request.

“Billy Graham lying in honor in the Rotunda and a statue of him placed in Statuary Hall, I believe, is a statement of profound significance,” said Dr. Creech. “It’s a reflection of our state and nation’s collective conscience. Deep within our hearts, we know our many sins and shortcomings. We know our need of redemption. Furthermore, although in this country we are tolerant of all faiths, we know America at its best is Christian.”

To watch the entire Memorial Service on C-Span, click here